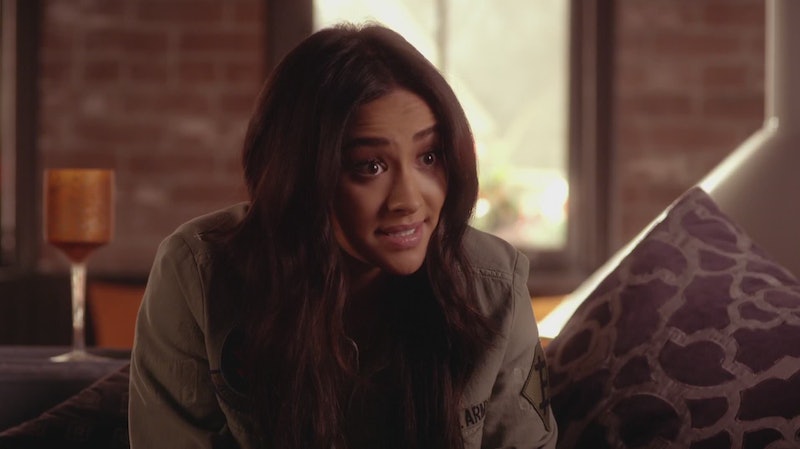 Remember when Spencer was the cool n' collected logic queen of Pretty Little Liars? You knew that, no matter how many torture-thirsty serial killers the show introduced, the Liars would generally make it out of a tight spot as long as they had Spencer around. Back then, Emily was the bleeding heart at the center of the group, with her overwhelming emotions causing her to make unwise decisions — like befriending the still-suspicious Sarah. But, and look away if you have yet to watch the latest episodes, all of a sudden it seems Emily is the new Spencer on Pretty Little Liars.

Let's talk logistics. That opening scene, with the gravedigging? Spencer may seem to be taking control while Emily weeps, but it isn't long before there's a 180. Spencer gets frustrated with Hanna, who's freshly traumatized from her "vehicular manslaughter" of Elliott and, when Arya suggests they should just confess the truth to the police, snaps "What truth is that? The one where Hanna doesn't know the right pedal from the left?"

Riling up her already totally devastated friend seems uncharacteristically mean of Spencer — but OK, we think. Maybe she's still mad Hanna kissed her boyfriend? It's still a little off though. The stakes are now a little higher than who's kissing who: there's a corpse involved. There's potential jail time, now. Emily jumps in: "Everyone take a breath."

A trend I've noticed in season 7 is that Emily's forced to assume Spencer's role more and more. She's becoming diplomat, detective, and leader all in one — AKA Spencer. She's also getting better and better at the witty one-liners we all know Spencer for. C'mon, that ragging on Elliott's nerdily normcore texting style ("As far as I can tell, the guy never even used an emoji") is sheer Spencer. And did you see her take control in the bar? Emily's forced to show up to work as usual because she doesn't want her alibi to suck. Got to give her props for her lack of PSTD. She's all serving drinks with one hand, checking her phone for a text from Aria with the other without breaking a sweat.

Meanwhile, Spencer's achy-breaky heart (courtesy of Caleb and Hanna's nostalgic kiss) has meant she's totally lost control. And what a time to do it. Are we really supposed to believe that the sharpest lady (aside from Mona) Rosewood has ever seen is going to fall to pieces over Caleb on the night that she's meant to be covering up a murder? I don't buy it. Spencer's always thrived in high stress situations, and now she's drunk-hooking up with the guy I'm pretty sure is Rosewood's newest detective in an elevator because she can't handle the pressure. Who does she think she is? 2004 Scarlett Johansson post an awards show?

Much like latter day Emily, Spencer is now all about the feels. Heck, she even ditches the cover up to go and try and make things right with Caleb. Given that a murder has taken place in the past 24 hours, who does that? Priorities, young lady, priorities.

Spencer is now Emily, and Emily is now Spencer, and even when Spencer seems to be Spencer (see: her instructions for the coverup), in the words of Mona, she's not exactly doing "a crackerjack job" of it. The weird twist in all of this is that it's so much more fun to watch. We've witnessed Spencer steer the Liars out of danger with easy competence a zillion times. We've watched Emily get taken in time and again because of her soft heart. This is a whole new rulebook, and I love it. So please, let's do more swapsies. Jenna as the new Caleb. Ezra as the new Mona. Let the era of PLL character swaps be just at its joyful beginning.