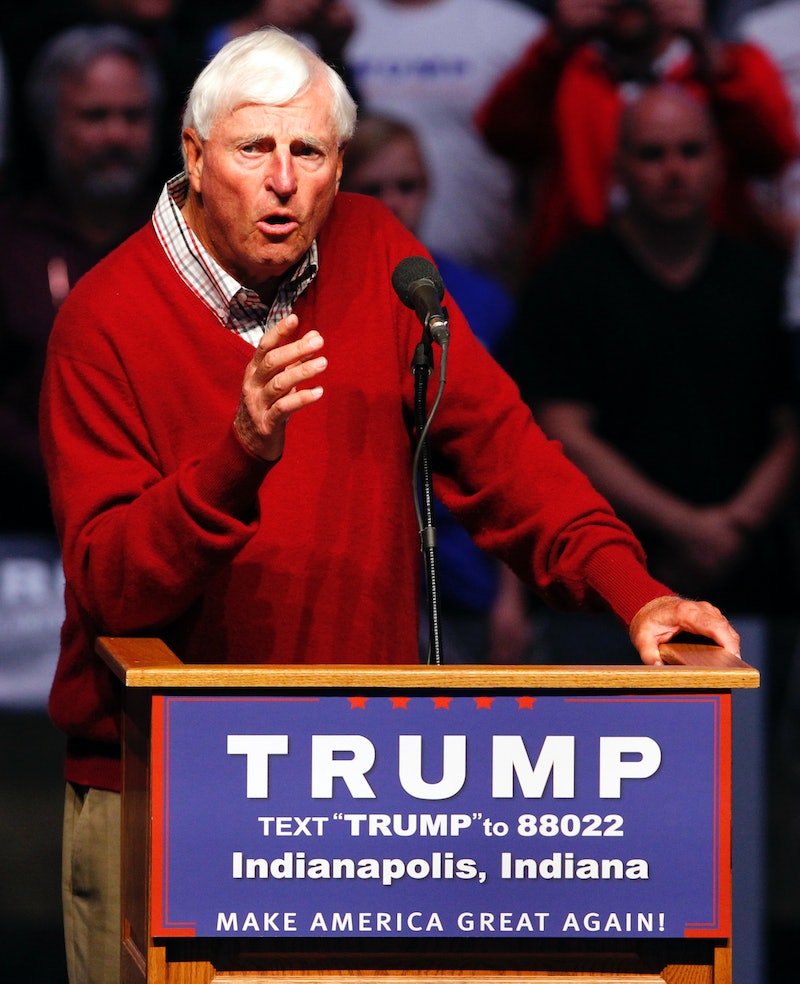 In the lead-up to the crowning moment in Cleveland, presumptive Republican presidential nominee Donald Trump threw around possible speakers for the convention. While many prominent Republican leaders, like any of the former Republican presidents (hey, Bushes), Mitt Romney, and John McCain, have given Cleveland a hard pass, Trump has vowed he will still put on a great show at the Republican National Convention, which will take place from July 18 to July 21. A few flash and controversial names have been floated out there, but perhaps none are as controversial as Trump supporter and basketball coach Bobby Knight.

But will Knight leave the confines of the court and head to Cleveland to stump for Trump? Knight, who campaigned with Trump in Indiana — and whom the Donald thanked for helping him pull off a win in the Hoosier state's Republican primary, was announced as a speaker by Trump last week. However, the Republican party clarified this week Knight would speak via video, as reported by The Hill. The 75-year-old coach is famous for his legendary college basketball career — and infamous for almost everything else, including the odious comment he made to Connie Chung in 1988: “If rape is inevitable, relax and enjoy it.” He later clarified, "I'm not talking about that, about the act of rape. Don't misinterpret me there. But what I'm talking about is, something happens to you, so you have to handle it — now.'' That didn't really make it sound much better, in my opinion.

In any other election, Knight might be considered too toxic for prime time politics, but given the struggles of the Trump campaign to secure speakers — including “Trump’s friend” Tom Brady and “acquaintance” Ben Roethlisberger — the GOP nominee may be running out of options.

Besides, Trump and Knight have a similar style, especially when it comes to how they deal with the press. Given that and the fact that Knight’s support in Indiana led Trump to victory against Senator Ted Cruz in that state’s May primary, the coach may be thought of as a lucky charm by the billionaire.

What the famed coach with the infamous temper might say at the RNC is anyone’s guess, but when he takes the stage, make sure you have the popcorn and the DVR ready.