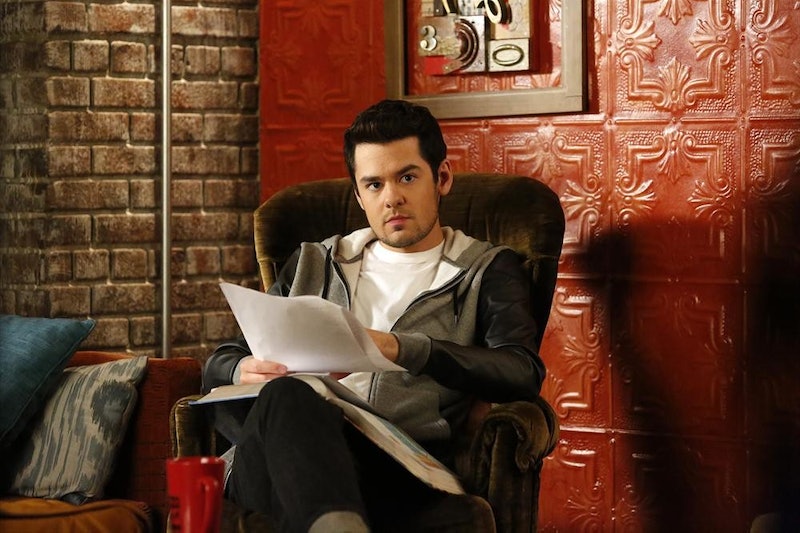 The Liars have done it again — and by "done it again," I mean murder. Well, technically, the term is vehicular manslaughter, but I'll blame stress and/or habit that Spencer keeps throwing around the term "first-degree murder." Tuesday's Pretty Little Liars episode "Hit And Run, Run, Run" finally caught up to that burial scene from the Season 7 opener, with the body in the ground indeed being Dr. Rollins, Alison's secretly evil husband and the person that Hanna ran over with her car. Speaking of that car, the owner of it might be one major clue as to who has been torturing the Liars this entire time — since it's likely not the super-dead Dr. Rollins. Could Lucas be Uber A? The writers may have planted a clue for us to find.

I have long been suspicious of Lucas, mostly because he's one of the few cast members from Season 1 that seems to constantly pop up in the Liars' lives, and also because his behavior has also read as sketchy-as-hell to me. (I mean, offering your high school pal a warehouse so she can "fashion" in her hometown?! No guy is that nice.) However, it's the clue about Lucas' car that makes me wonder if, perhaps, we should suspect this guy of more than just being Hanna's temporary sugar daddy. After Hanna hits Dr. Rollins with her car, the Liars make a point to say that they were actually driving Lucas' vehicle, not one of their own. Why is that important? It might explain how Uber A knows about what the Liars have done to Dr. Rollins.

According to showrunner I. Marlene King's spoilers for PLL Season 7, Uber A will hold the Liars' biggest mistake over their heads, thus driving the drama of Season 7. Though Uber A has been quiet during the whole Dr. Rollins drama, there's no way that the season will go by without the deadly villain getting wind of their crime — but how that person does might go right back to Lucas. What if Lucas knows what the Liars have done because he's put a tracker on his own car in order to keep tabs on Hanna?

We haven't seen Lucas since Season 6, but his presence is definitely felt on the show — Hanna not only stays in his apartment, but she drives his car and uses his things as well. She clearly does that because she trusts Lucas, but if Lucas isn't a trustworthy guy, it could be the perfect way for him to watch Hanna even when he can't be in Rosewood. We know that Dr. Rollins was working with someone, so why not Lucas? It could be the perfect way for Dr. Rollins to follow the Liars — all he would have to do is score intel from Lucas.

There's definitely something shady about Lucas, and I wouldn't be surprised if his so-called "nice guy" act is just that.