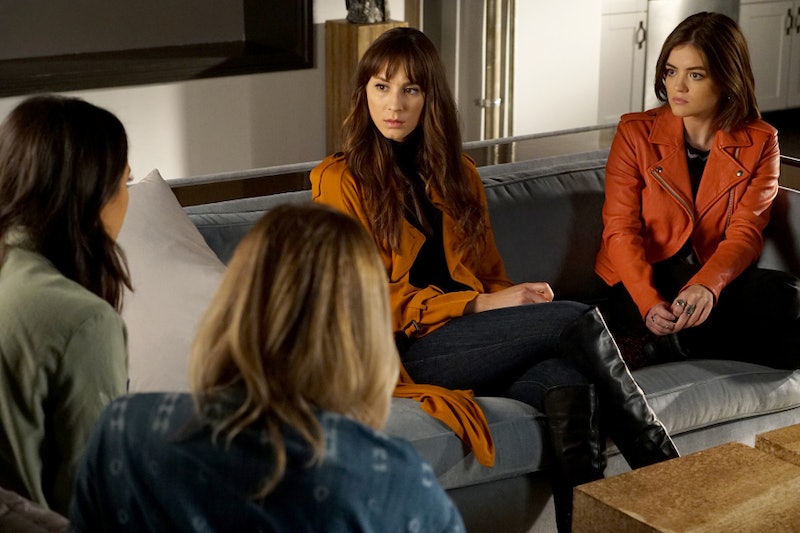 If there's one Liar who is having a really bad time now that she's returned to Rosewood, it's Spencer. After finally admitting her romantic feelings to her long-time crush Caleb and unleashing the Spaleb ship onto the world, Spencer's newly-formed relationship crumbled under the weight of that Haleb kiss from the Season 6 finale. Spencer isn't in a great place right now, which is why it's not all that surprising that she hit the bar pretty hard in Tuesday night's episode "Hit And Run, Run, Run." Instead of helping cover up Dr. Rollins' murder, Spencer got awfully cozy with soon-to-be-revealed Rosewood detective. A revenge hookup is hardly the worst mistake anyone could have made, but there's one big clue about Spencer from PLL 's "Hit And Run, Run, Run" that suggests she may have dropped the ball big time for the Liars.

Spencer's impromptu date with Vic — which started at the Radley bar and ended in the Radley elevator — is causing some people on Reddit to raise an eyebrow, and it has nothing to do with Spencer's hookup. Instead, it has to do with who paid the bill after the pair's drinking session. Though Vic offers to buy Spencer's drinks, she insists that she foot the bill. She hands over her credit card, and the camera lingers just a little too long on the receipt. Reddit user Pllfan7421 has a theory about why this is: because Spencer accidentally used Dr. Rollins credit card.

We know that Spencer has Dr. Rollins' credit card because it was a part of the plan used to cover up the manslaughter. Spencer was supposed to drive Dr. Rollins' car to the train station, purchase a ticket using his own credit card for the train, and then leave his jacket and cellphone in one of the seats. Is it a perfect plan? Definitely not — I mean, if covering up a murder was that easy, then the Liars would have a lot less to worry about. However, if Spencer really did accidentally use Dr. Rollins credit card, it could immediately draw suspicion on her — and likely the rest of the Liars. Seriously, how the heck would anyone explain the use of a missing man's credit card?

It's possible that Spencer didn't actually make such a serious error, but who are we kidding? This is Pretty Little Liars. If Spencer didn't mess up, someone definitely complicated the Liars getting away with murder, and Uber A will likely be there to rub it in their faces.