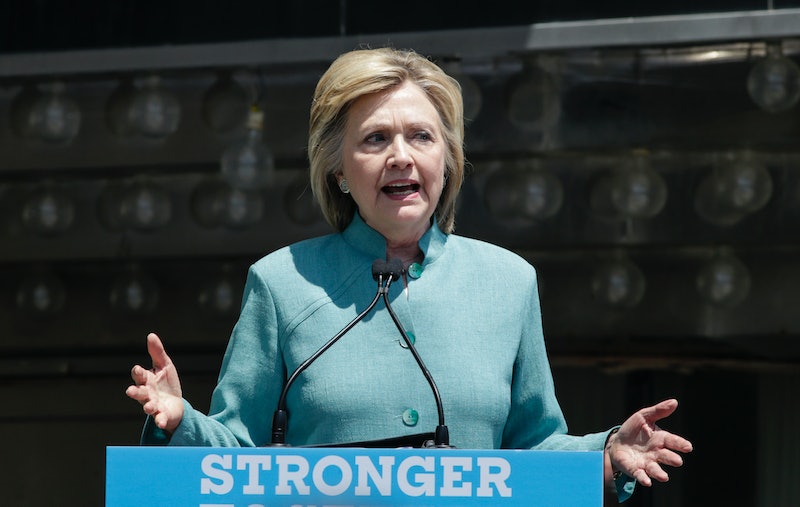 When Vermont Sen. Bernie Sanders finally endorsed presumptive Democratic nominee Hillary Clinton for president, the last vestiges of the primary campaign finally came to an end. Now there really is no conflict left in this election, besides the one between Clinton and presumptive Republican nominee Donald Trump (unless Gary Johnson somehow really gets things in gear). As such, it's no surprise that the attacks are flying. Clinton took aim at Trump's response to the Black Lives Matter movement on Wednesday.

On Tuesday, Trump appeared on Fox News' The O'Reilly Factor, and host Bill O'Reilly asked him what he would say to black Americans who feel "the system is biased against them." His response, in classic Trump style, was inflammatory, hard to believe, and overflowing with self-aggrandizement:

Well I've been saying, even against me, the system is rigged. When I ran as a, you know, for president, I could see what was going on with the system, and the system is rigged ... What I'm saying is, they're not necessarily wrong. There are certain people where unfortunately that comes into play, and I'm not saying that. I can relate it really, very much to myself.

Trump did also acknowledge to O'Reilly that you couldn't really say you understand the black experience in America if you're not black. But he clearly still wanted to, sounding as if he were uncomfortable with the constraint: "Well, I'd like to say yes, but you really can't unless you're African-American. You can't truly understand what's going on unless you're African-American. I would like to say yes."

Obviously, some amount of self-obsession isn't exactly new for Trump, and neither is feverishly reminding everyone how things were back when he was beating the Republican primary field. But comparing your experience as a wealthy presidential candidate to that of a black person fearing for their life in the presence of a police officer, or facing racial disparities in the criminal justice system, or any number of other ills rooted in institutional racism?

That is a whole different beast, and it's exactly the sort of thing the Clinton campaign is clearly counting on Trump not being able to keep himself from saying. It almost defies understanding to think that someone running for national office would say such a thing, even if they truly believed it, just to keep it out of the public discourse. Although in fairness, that's a line that Trump's crossed dozens upon dozens of times already, sometimes seemingly with glee.