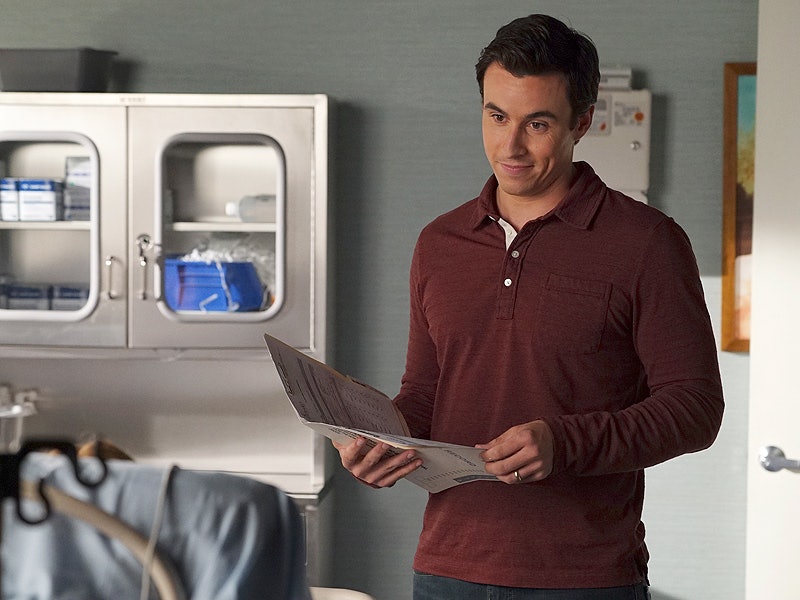 The person that the Liars accidentally murdered in Season 7 has finally been revealed, and it's none other than Pretty Little Liars villain Dr. Rollins. After the Liars learned that it was Alison's husband who was drugging and torturing her in Radley, they set off to find him before he could hurt Alison further. Unfortunately, those good intentions led to Hanna running over Dr. Rollins with her car, killing him, and making the Liars guilty of yet another accidental death. With Uber A silent after Dr. Rollins' death, the Liars speculate that he was the one behind the anonymous A.D. texts — and now, the Pretty Little Liars promo for "Along Comes Mary" suggests Dr. Rollins is the initialed villain as well. Should we believe the promo's hype that Dr. Rollins is A.D.? Personally, I think there could be another explanation entirely.

We know that Uber A is A.D., and that Jenna called Dr. Rollins "Archer" when she was heard on the other end of his burner phone. Given that Elliott Rollins is a fake name, it makes sense for Dr. Rollins to go by something else — and the new promo may have just given us an answer as to what that name is. In the new promo, the Liars find a book seemingly belonging to Dr. Rollins with the name "Archer Dunhill" in it. Could that mean Archer Dunhill equals Dr. Rollins equals Uber A?

It's certainly possible, but I'm definitely not hedging my bets on Dr. Rollins being A.D., even if his name really is Archer Dunhill. That in itself could be a total red herring — we can't forget that Alison DiLaurentis also goes by A.D. per her initials, and that another Drake or secret DiLaurentis sibling could also share those initials. Really, Dr. Rollins' name could be a total coincidence — it's definitely not enough evidence to assume that this is the person who has been stalking the Liars or took Hanna.

Of course, the most glaring reason why I don't think Dr. Rollins is A.D. has to do with the simple fact that we're not going to find out who Uber A is for a while. The series has a long way to go, and if it revealed the ultimate Big Bad a mere six episodes into its potential final season, well, what else would we have to look forward to?

More like this
Everything To Know About A Million Little Things' Reported Final Season
By Brad Witter
Grey's Anatomy Fans Refuse To Accept Kaimelia's Shocking Relationship Update
By Brad Witter
Oops! The 'Stranger Things' Monopoly Game Has Spoilers For Season 4
By Alyssa Lapid
20 Photos From The 'Stranger Things' Season 4 Premiere To Make You Feel Old
By Alyssa Lapid
Get Even More From Bustle — Sign Up For The Newsletter