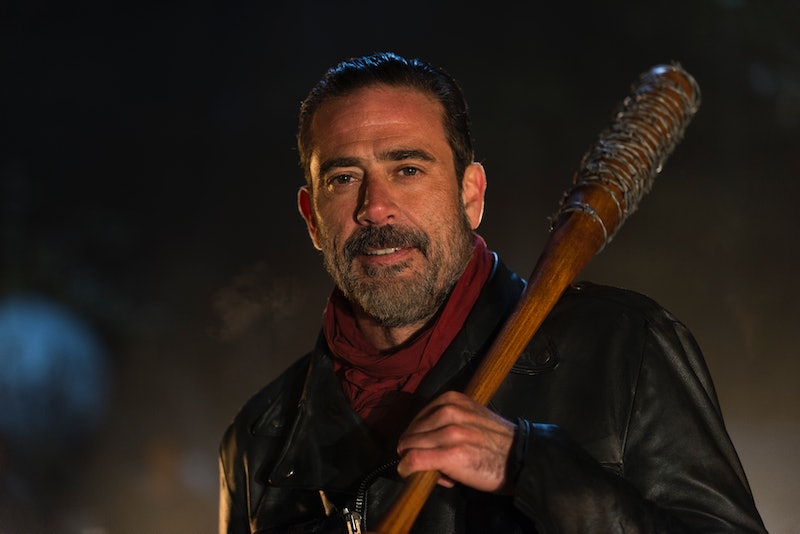 During Season 6, The Walking Dead left fans with a cliffhanger that depicted big baddie Negan playing duck, duck, goose with our favorite survivors. Now, the creators of the AMC show have told Entertainment Weekly that fans will find out who is getting a whole lot of Negan's barbed-wire bat named Lucille to their head sooner rather than later. That's right: the creators won't keep all of us hanging any longer, and will reveal who Negan kills in the Season 7 premiere of The Walking Dead. They're probably happy to at this point, being that the creators were so concerned that people would try to crack the case they reportedly went to the trouble of filming Negan kill all 11 characters to minimize the possibility of spoilers getting out.

But, despite all of the characters being killed in different versions of the scene, only one will die at Negan's hand — at least for now. A lot of people have opinions about who will lose their life when The Walking Dead returns this fall. Some people think the poor victim could be someone who's lost his life already in the comic book series (*cough* Glenn *cough*), while Talking Dead host Chris Hemsworth told International Business Times UK that he didn't know who would die but had a few guesses — namely, that it could be Maggie or Michonne, because Negan knows it would be painful for their partners, Glenn and Rick respectively. Of course, you could also go the The Hollywood Reporter route and just say it doesn't matter who Negan killed, because it's already happened.

They're probably right, what's done is done, but it won't stop me from trying to guess who will be losing their life. So, here's my list of who could be Negan's first kill, ranked from the least to the most likely character to get an unfortunate taste of Lucille.

He's clearly the leader, so killing him would be a bold statement from Negan. But, Rick's the leader and the main star of this show, so no, he's not going out like this. Not a chance.

Negan has already had some harsh words for Carl, who lost his eye last season. Specifically, letting everyone know, "If anybody says anything, cut the boy's other eye out and feed it to his father." The fact that Negan toys with the youngest member of these survivors right before letting Lucille fly means Carl will likely get to see another day. But, since Entertainment Weekly already reported that Negan is going to have a few more monologues, he'll probably be the recipient of a lot more of those in the future. Basically, he should closely guard that other eye of his.

If history has taught us anything about Sasha, it's that she is the character who carries the pain of watching everyone she loves die. It seemed like that burden was going to be too much for her, but last season, she turned things around by finding some hope in the situation she has been put in. After losing her brother Tyrese and her lover Bob, she's found someone to love in Abraham. She likely won't die, but Abraham may want to be concerned.

Starting a love affair with another main character on a show like TWD could definitely be the kiss of death and when we last left Michonne she was definitely getting it on with Rick. But I don't think the show is ready to lose this strong, and not to mention, very popular character quite yet. So I'll say she's safe... for now.

He's the chosen one in the books, so one could think he has the likeliest odds of being chosen. But, being that the show already left us wondering if he was dead last season, and upsetting lots of fans, it seems kind of cruel to kill him off in this way.

Maggie could be an interesting stand-in for her husband. And if you believe TV Guide, Lauren Cohan has only been spotted on set once, which could be a telling sign of her TWD fate. But killing a sick, pregnant woman seems so unforgivable, it's hard to imagine the cliffhanger going this route. The Walking Dead is dark, but I don't think this show is that dark that it could deal with the fallout of doing that to such a beloved character.

Let's be honest, he's likable, but he's also disposable. He's had little screen time, and he would be an easy character to get rid of. Sure, it also seems a little weak to kill him off in such an extravagant way, but it could happen.

Norman Reedus has his own show called Ride With Norman Reedus on AMC, which could be his consolation prize for leaving The Walking Dead. But, if you want the best clue that Daryl is the one to go, it may be that he appeared on The Talking Dead after the Season 6 finale — a spot usually deserved for characters who have been killed off. Of course, he's one of the most popular characters, which would make this death one that is bound to get the internet in a tizzy. But, it would be a bold move to kill him off. Not necessarily a good one, but certainly a bold one.

She's still an enigma, which puts her in a vulnerable position. She's someone who's managed to last a few seasons, but she's yet to get a real juicy storyline that's all her own. Killing her off may seem like a sad, but doable choice for the writers who want to make this death count, but don't want to lose any fan-favorites.

In the season finale, he said his goodbyes and prepared himself to be the savior of his people. He's already given his plans for a better world to Rick, so there's not much left to do with him. Sure, it would be ironic, and his big transformation could lead to more storylines for him, but even Eugene knew it was unlikely he was coming back.

Unfortunately, he had an arc last season that felt a little final. He fell in love with Sasha, made up with Eugene, and realized that he wanted to be a part of this community. While it would be sad to watch him die this way, he is a fully realized character who has already died in the comics. While it wasn't like this, it wouldn't be surprising if they decided to give Abraham this tragic and scene-stealing death. Especially since he seemed willing to stand up to Negan, and prepared to lose his own life in hopes of saving someone else's.

Who won't make it past the first minutes of the Season 7 premiere? We'll have to wait until The Walking Dead returns on October 11 to see. Though, let's be honest, none of us want to see this.