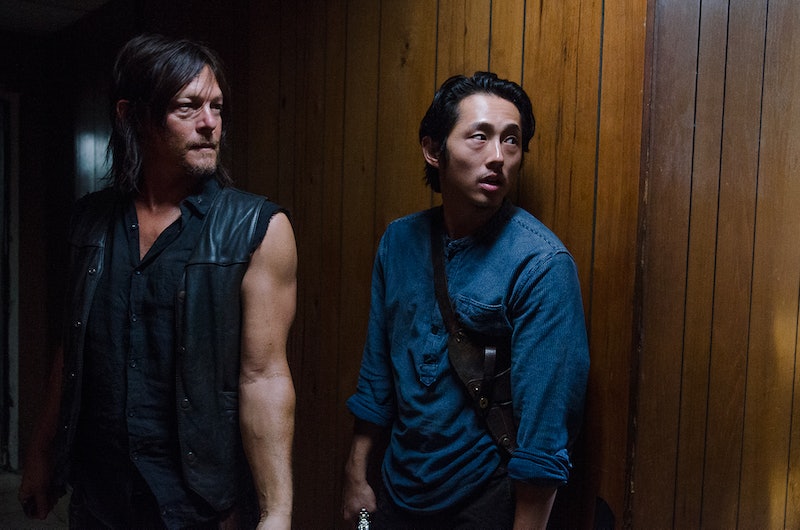 Even if you don't follow the comic books, if you're a fan of The Walking Dead, then you know that Negan is coming, and that means seriously bad news. Since Rick and crew just murdered most of the Saviors during the March 6 episode "Not Tomorrow Yet," it's very likely that their leader Negan will kill someone on The Walking Dead — and soon. If you look up theories about the AMC zombie show, it would be difficult not to know that when Negan shows up in the Season 6 finale, he's most likely going to devastate fans by killing a favorite character. Spoilers for the comic book series ahead.

Negan is a sadistic and violent man, and I wish that Jesus had sufficiently warned Rick and crew exactly what they were facing before getting them to take on the Saviors' compound. Rick, Daryl, Michonne, and Abraham are some serious badasses, but each of them usually has a conscience — something I am not sure Negan has. In the comic books that the show is based on, Negan kills people with a baseball bat wrapped in barbed wire, which he has lovingly named Lucille. So when he appears on The Walking Dead, fans expect that the series will mirror the comics, with Negan killing Glenn with Lucille in front of the pregnant Maggie.

Originally, upon hearing about the Negan / Glenn / baseball bat scenario, I absolutely believed Glenn's time was up. However, the amount of evidence the series has been letting out about Glenn's potential death seems out of character, given how it thrives on surprising fans. From Glenn's close call earlier in Season 6 to Glenn and Heath looking at pictures of Lucille's victims to comic creator Robert Kirkman specifically giving away the Glenn-Negan spoiler on Chris Hardwick's @Midnight a year ago, doesn't Glenn dying at the hands of Negan seem a bit too predictable? Or am I just being deliriously hopeful? I mean, even when I spoke to Maggie's actress Lauren Cohan earlier this year, she made me think that Glenn was going to die at the hands of Negan.

The Spoiling Dead Fans had a poll (it closed on Feb. 29) about who will be the first character to get "Lucilled." Predictably, Glenn was in the lead, with 460 votes. Daryl was a close second with 457 votes, and Abraham a far third with 156. And everyone from Tara to Micohnne was considered fair game to be killed by Negan.

As Cleveland.com wrote about numerous characters who could potentially die at Negan's hands, it would almost be more surprising if The Walking Dead didn't have Negan kill anyone in the Season 6 finale. But I don't think fans are going to get out of this so easily. In order to prepare you for the likely impending death of a fan-fave character, here is a roundup of most of the theories about whom Negan will kill when he first arrives on the scene.

As previously mentioned, Glenn is the obvious choice to be killed via Lucille, since that's the fate he meets in the comics. He dies in front of the pregnant Maggie, who on the show has currently been captured by the Saviors along with Carol. If this brutal and vicious death befalls Glenn, it will devastate fans (myself included), even if it is predictable.

Daryl is a tricky one because he is not in the comic books, so his fate is completely up to the whims of the TV series. With that in mind, fans have been theorizing that Daryl will be the one to be killed by Negan. And Wetpaint corroborates the idea that Daryl will die at the hands of Negan instead of Glenn. Knowing that the TV series has switched around characters' fates (like Bob being "tainted meat" instead of Dale), this is plausible. Yet, while I know that Kirkman has said that no one is safe, including Daryl, I don't think it's Daryl's fate to die just yet.

If it wasn't for "Not Tomorrow Yet," I wouldn't think that Carol would be in the running to get Lucilled, but Zap2it made some strong points about why it could be her time to die. Along with fiercely defending Maggie, Carol was making beet cookies, making out with Tobin (how long have I waited for a Daryl-Carol hookup, and this is how you repay me, TWD?!), smoking cigarettes, and tallying the number of people she has killed. While I don't want Carol to die, these actions are all a bit too swan-songy to ignore, and could foreshadow her being Negan's next victim. Not to mention she has already been captured by the Saviors with Maggie.

Speaking of Maggie, Moviepilot threw out the theory that it could be a shocking twist if Maggie died at the hands of Negan instead of Glenn. It would be completely horrifying to see a pregnant woman beaten to death, but Cohan's recent haircut has people theorizing that her time on the show may be over. (I even fretted about that when I saw her pixie cut.) Everyone knows that it's no easy task to raise a child on The Walking Dead, so could the series avoid adding another baby by killing Maggie? Please say it ain't so!

Morgan's plot on the show is very different from his arc in the comics, and because of that, he has been considered a potential victim of Negan's. While he is at home in Alexandria for now, there could be a chance that he rejoins the group when they first face Negan. And since Morgan is already dead in the comics, Inquisitr theorized that the peaceful Morgan could be killed next on the series. While I think Morgan's time on the show may be running out, I'm not convinced Negan will target him yet, so I think this is a long shot.

Moviepilot also put out the idea of Alexandria recruiter Aaron being the one to die by Negan. In the comics, that is not his fate, but the Aaron of the comics is also BFFs with Rick, which has not happened on the show yet, so he's not following his comic book trajectory so far. Since Aaron stepped up in the March 6 episode to help kill the Saviors, it wouldn't be out of the question that this newish character would get the ax (errr, or bat).

Forbes reported that Heath's actor Corey Hawkins has taken the lead role in the new series 24: Legacy , a spinoff of 24, so there's a possibility that The Walking Dead will need to kill him off. In the comics, Heath is part of the lineup of people whom Negan threatens to kill, but he survives and is still alive in the comics as of now. Yet, considering that Heath and Glenn bonded over their mutual fear of murdering the Saviors in the March 6 episode, maybe it was a setup for Heath to die in the place of Glenn. Although I hate when shows have to change plotlines because of casting, in this case, I might not mind, since I'm much more emotionally invested in Glenn's storyline than Heath's (sorry, Hawkins!).

Like Morgan, a theory of Abraham dying has come from Inquisitr, and is based on the timing of his death in the comics. At this point in the comic series, Abraham had been killed (not by Negan), so maybe the show will change up how he dies. The amount of screen time Abraham has been getting, and the fact that he left Rosita, lead me to think his death could be impending. But do I think that a man who is comparable in size to Negan would go down with just a baseball bat? I'd be surprised, but it would make for one hell of a scene — even Abraham's actor Michael Cudlitz agrees. Cudlitz told Zap2it that he'd like Abraham to face off with Negan, saying, "I would love to be involved with Negan. If they decide I'm going to go during that time, I would love to have some badass, hand-to-hand deal with Negan."

While Negan will probably be responsible for many deaths during his tenure on The Walking Dead, his first killing will have a major impact on the series. And even with all of these theories, I don't think fans will ever be emotionally prepared the first time he beats a character with Lucille.

More like this
Who Could Die In The Stranger Things Season 4 Finale?
By Kadin Burnett
“The Door Is Always Open” For Another 'Breaking Bad' Spin-Off, Says AMC Boss
By El Hunt
Regé-Jean Page Spoke Out On His Rumoured 'Bridgerton' Return
By El Hunt and Maxine Harrison
'Stranger Things' Season 4 Volume 2 Trailer Teases New Episodes Coming July 1
By Grace Wehniainen and Gabrielle Bondi
Get Even More From Bustle — Sign Up For The Newsletter