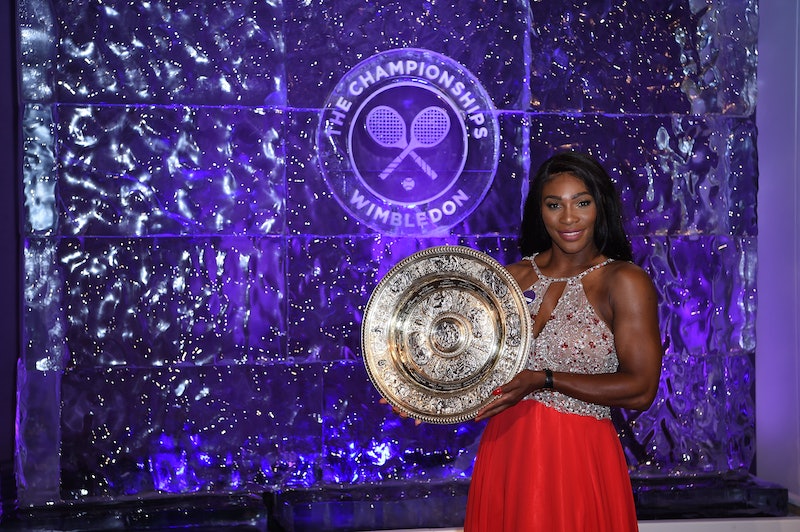 Wednesday night, the 2016 ESPY Awards happened in Los Angeles and featured celebrity appearance like Ciara and athlete husband Russell Wilson as well as several of the athletic elite. Not there, though? Serena Williams. If you're wondering why Serena Williams' 2016 ESPY Awards dress didn't happen, the sports star has an excellent reason. While other athletes headed out to the red carpet of the awards show, Williams appeared to be on vacation during the show, and really, who could blame her?

Last weekend, Williams took home 22 Gland Slam and her seventh Wimbledon title. Basically, she won last weekend both literally and figuratively. That's right, she hit double digit Grand Slams, and to make things even cool, Beyonce and Jay-Z were there to cheer the tennis star on. Essentially, she's cooler and more athletic than I could ever hope to be, and I kind of love her for it.

With such a big weekend behind her, is anyone really surprised that Williams wasn't at the 2016 ESPY Awards on Wednesday night? According to the athlete's Instagram account, she can be seen lounging gorgeously in a chair by what I can only assume is some stunning body of water. With a chic black one-piece with gold details and side cut-outs, she looks gorg despite not hitting a red carpet.

So, if you were wondering why Serena Williams' 2016 ESPY Awards red carpet dress didn't happen, it's because she's taking a much needed vacation. Let's be real, too, we all know Williams can slay a red carpet. If you wanted a glam Williams, it wouldn't be too hard to find one. One of the most apropos examples would be when she totally slayed the Wimbledon Champion's Dinner last year.

The gorgeous nude-pink gown is just one example of the Wimbledon champ looking gorgeous, but hey, I find it fitting that she looked so gorg slaying an event after she'd just slayed a competition.

So, if you were bummed that Serena Williams' 2016 ESPY Awards dress didn't happen, don't worry. There are tons of other opportunities to see the star looking glam. Meanwhile, I'll just be over here staring at her jubilant, stunning victory photos from last weekend's Wimbledon.