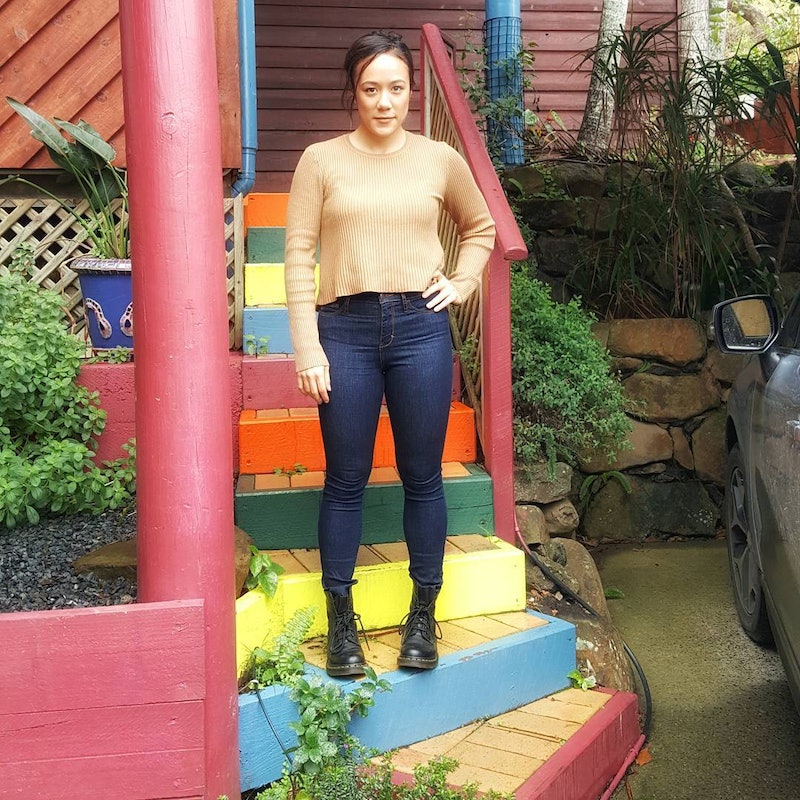 As a teenager, I searched everywhere to find someone with a body that looked remotely like mine. I was constantly on the lookout in public spaces and at school, determined to find someone who was short and stocky, with toned calf muscles and broad shoulders. But there were very few whose bodies mirrored mine, particularly in the media. I felt boyish most of the time, while all of the images of women around me seemed effortlessly feminine.

I'm not under any twisted impression that I'm alone in these insecurities; 91 percent of American women struggle with body image and have turned to dieting at least once in their lives. We're constantly under an enormous amount of pressure to look a certain way, and most of the expectations are transmitted to us subconsciously, through billboards and advertisements, of tall, thin, long-haired, light-skinned women.

In addition to the visuals, though, are all the comments and "suggestions" women receive on the daily in regards to their body. Family members tell us we should dress a certain way to accentuate a particular body part. Articles recommend things to eat in pursuit of a flat tummy. The criticism is non-stop, and it deeply affects us. Even though I've (sadly) become used to people commenting on my supposedly unique body type, that doesn't mean I'm now numb to it. There are still a few remarks that plague my mind and threaten to chip away at my self-esteem.

Here are six things that people said to me about my body type that shaped me.

1. "But You Look Really Strong"

There's nothing wrong with looking and feeling strong — it's the "but" part of this phrase that gets me. It's as if my strength is an acceptable substitute for not having a conventionally thin body type, as if they're trying to say, "You're not pretty, but it's OK because you're really strong." It reminds me of all the times when models and celebrities like Ashley Graham and Melissa McCarthy are never simply described as gorgeous. Their beauty is explained or sub-categorized as "plus-size" or "curvy."

Ever since I started hearing this (the first time was from my high school gym teacher, right after she complimented another girl for her long, lean legs), it has left the idea in my head that "strong" and "beautiful" are two different things. It's also made me nervous that if I ever were to lose any muscle mass, that I would be deemed unattractive by the world, because now I wouldn't even have my strength to excuse me for not being skinny.

Girlfriends always meant well when they said this to me in high school. They were trying to be nice and make me forget about the fact that I couldn't fit into their clothes at someone's sleepover. It was the first indicator in my mind that "chubby," or any other adjective that was considered not "skinny," was something bad or undesirable (news flash, it's not). I became acutely aware of the clothes size I was wearing, always trying to fit into something smaller.

Furthermore, in my mind, the word "curvy" became a pity-driven substitute for "overweight". Every time I heard it, it was kind of like eating a fake sweetener, one that tastes disgustingly saccharine and makes you cringe. From that moment onwards, I knew that when I heard somebody describing me or anyone else as "curvy," what they were really doing was trying to compliment the person even though they weren't thin.

3. "At Least You Work Out And You're Really Toned"

Meet muscle tone, your consolation prize for not being skinny. Well, that's the message everyone was sending me, anyway. Anytime I got into serious conversation with friends about our bodies and our insecurities, there was inevitably someone who would pat me on the back and say some variation of this phrase. This is how it sounded to me: Hey, if you can't be thin and pretty, make sure you at least workout and your body is firm! Then you'll have nothing to worry about!

There is so much wrong with this, I don't even know where to begin. If we're going to ever say anything about our bodies, it should never start with "At least." That indicates that there are other major physical flaws that you don't have to worry too much about because there's something else that makes up for them — when the truth is, every single inch of you is flawless exactly the way it is.

Making sweeping generalizations about any ethnicity or race is never a good thing, and stereotypes should be put to rest for everyone's sake. But on a personal level, I resented hearing this comment so often because, quite frankly, it confused me. My body type is actually starkly different from the Korean women in my family (and many other Korean girls I know), so I didn't know why anyone was even saying it to me. It felt like a white lie that was also kind of a backhanded compliment.

I also started to question why I couldn't just be considered beautiful without an ethnic label attached to said beauty. Was I too different looking to just be pretty? Did I need to be categorized in this way in order to explain my looks? It heightened my insecurities immensely, particularly around white, Anglo-Saxon women, since I knew that they were the ones who carried the unattainable standard of beauty.

5. "I Know Some Guys Who Are Really Into Your Kind Of Figure"

Constantly hearing adults talk about a woman's figure in reference to a man's liking tricked me into thinking that our bodies are meant to please others, even if I couldn't exactly articulate this to myself. Subsequently, I attempted to dress myself in a way that men would like, attempting to add some curves to my waistline or cover up my upper arms. It was an exhausting process, one that left me very unsatisfied with myself.

Besides, it made me feel like I was being fetishized by men, and even though I didn't fall into the normal category of pretty, that there would always be a small group of dudes out there who would be interested. Yuck.

Astonishingly enough, this was said to me more than once — by an ex-boyfriend, to boot. He was a jerk of human being, but we were in a relationship, so what he said really stuck with me. He thought that because he was laughing when he said this that it was OK, but it honestly tore me up inside, and continued to hurt me for years after we broke up.

Hearing that my body is similar to that of a linebacker's was enough to convince me that I'm not as "feminine" as I'm supposed to be. It taught me that there is a definitive line between masculine and feminine, and that my body type was dangerously close to crossing it. As a result, I hated the physical shell I was stuck in, and every time I saw someone petite on a magazine cover, I nearly collapsed into tears, knowing that I would never look like that.

I'm happy to report that I've come a long way since then, but that doesn't mean I've entirely forgotten about this crude commentary on my body. I've now come to terms with the fact that I do have wide shoulders and thicker legs, and there's absolutely nothing abnormal or wrong with that. In fact, it's beautiful.

More like this
Are Gemini & Scorpio Compatible In A Relationship?
By Kristine Fellizar
Here's How To Practice Self-Love In Small Ways Every Day
By Mackenzie Sylvester
Iris Law's Skunk Mullet Is Not For The Faint-Hearted
By Tomi Otekunrin
If You're Lazy But Want To Be Organized, Here Are 44 Things You'll Wish You Knew About Sooner
By Rebecca Martinson
Get Even More From Bustle — Sign Up For The Newsletter