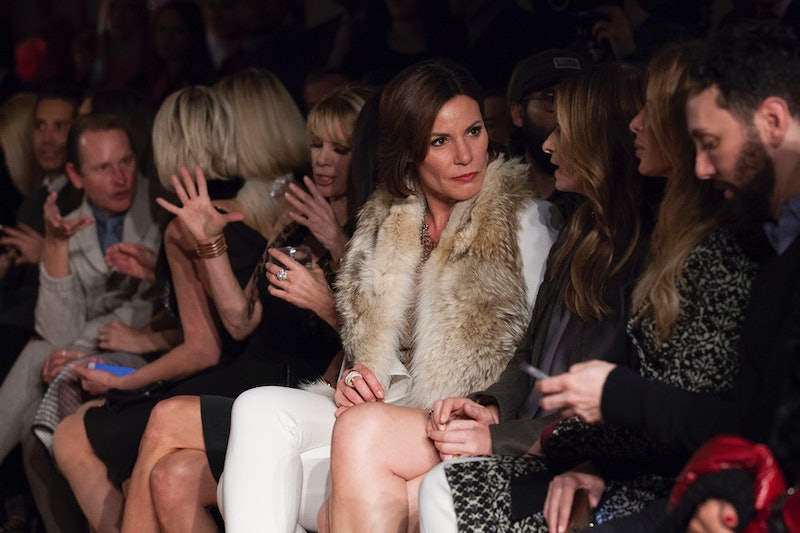 Luann de Lesseps is engaged to be engaged on Real Housewives Of New York, and boy, is it causing a lot of problems. Firstly, her beau, Tom, seems to have slept with everyone in the group (including Sonja only like, a month before he and Luann started dating), and apparently he’s still in touch with most of his exes. But Luann doesn’t want to hear it, and so she must be left alone to deal with her relationship. Haha, just kidding — the other women, including Ramona Singer, are talking about Tom and Luann, and Luann has finally had enough, and Luann confronted Ramona about Ramona’s egregious behavior.

It all started like this — Dorinda told Luann that Ramona was talking about her, even though Dorinda basically pulled the information out of Ramona of what she thought about Tom and Luann’s relationship with him and all of that jazz. Damn, Dorinda — do you like the drama or what? Anyway, Luann called Ramona out on talking behind her friend’s back, and Ramona denied it…. then admitted it… then excused herself, and then talked the usual Ramona nonsense she talks to try and get herself out of it. It didn’t’ work, though — Luann had had enough, left the disaster dinner, and that was that. Just kidding. Ramona and Luann decided to scream it out on the street a few days later, and they reached some sort of accord? I’m still not sure.

Here’s the thing, though — though Ramona and the gang could package their news better, there’s something up with Tom. He’s slept with half of the housewives, he’s never been married, and he, up until a month before, had used Sonja has a you-know-what buddy. And all of that’s fine, but the other ladies on Real Housewives Of New York seem to think that Luann should slow her roll a little bit to make sure she knows everything that’s going on with her soon-to-be fiancé before she hitches her horse to that wagon. Of course, Luann is deep in love/lust and when you’re deep in love/lust, you can’t see a thing. Hopefully it all works out, or hopefully, she sees any red flags come up before they get married.