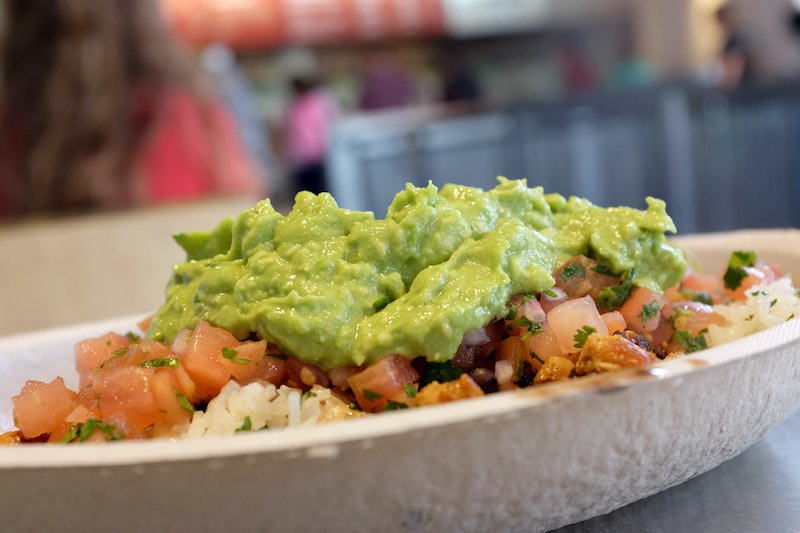 Okay, well, this is terrible: If global warming continues at its current rate, Chipotle might stop serving guacamole. Yes. In its annual report, released last month, the popular Mexican food chain said that “changes associated with global climate change” might drive up the price of certain ingredients, and the company might respond to this by “temporarily” yanking those ingredients from its menu. It specifically mentioned guacamole as one of the potential victims in this worst-case scenario, proving once and for all that climate change is a big deal.

“Increasing weather volatility or other long-term changes in global weather patterns, including any changes associated with global climate change, could have a significant impact on the price or availability of some of our ingredients,” the report says. “In the event of cost increases with respect to one or more of our raw ingredients we may choose to temporarily suspend serving menu items, such as guacamole or one or more of our salsas, rather than paying the increased cost for the ingredients.”

Unacceptable! Guacamole is one of the best parts of Chipotle’s ridiculously delicious burritos. The company acknowledges that removing it from the menu could wreak havoc on sales, but apparently, the cost-benefit analysis just doesn’t work out in guac’s favor.

“Any such changes to our available menu may negatively impact our restaurant traffic and comparable restaurant sales, and could also have an adverse impact on our brand,” the report reads.

Chipotle uses around 97,000 pound of avocados every day to make its guacamole, and while avocados aren’t immediately threatened by changing weather patterns, the drier and hotter conditions that climate scientists anticipate could change that. This is particularly true in California; as Chipotle only uses produce grown on farms within 350 miles of the restaurant it’s served in, California locations could be the first victims of the guac suspension.

If this doesn’t convince Republicans that global warming actually will have some tangible negative consequences, nothing will.

UPDATE: Business Insider reports that the guacamole-shortage panic may all be for nothing. Thank God.

"This is strictly routine 'risk factor' language as part of the annual financial disclosure," a Chipotle spokesman told us in an email.

Chipotle notes climate change as one of the "risks related to operating in the restaurant industry" in the report, which is filed with the Securities and Exchange Commission.

Risks like labor costs, food-borne illnesses, and competition from other businesses are also mentioned by Chipotle. Public companies are legally required to disclose these risks in SEC reports.

More like this
What To Know About Martin Bashir After Watching 'The Crown'
By Bustle UK
This Luxe Cookware Is Beloved By Celebrity Chefs — And It’s Majorly Discounted For Black Friday
By BDG Commerce
How Long Does Leftover Stuffing Last? Here's When To Toss It
By Chelsey Grasso and Alexis Morillo
The 7 Best Microwavable Coffee Mugs
By Kirsten Bakstran
Get Even More From Bustle — Sign Up For The Newsletter