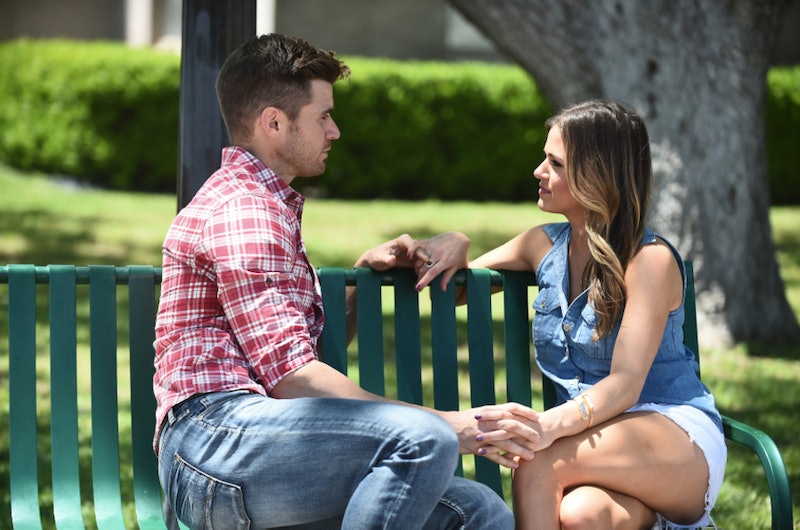 What does JoJo Fletcher like? Well, there's horses and men with styled hair and... champagne? I think? According to her Bachelorette bio on ABC's site, "JoJo enjoys traveling, sports, country music and playing with her dog, Jackson." She also has her own business as a real estate developer, so I assume she at least sort of likes that, too. But what about the specifics? What country singers does she like? What are her favorite movies? Her favorite books? What sports teams does she root for? What's her favorite place she's travelled? What kind of dog is Jackson? It's likely that the people close to JoJo know the answers to these questions. And it's possible that the remaining guys on the show even know. But as fans of The Bachelorette, we'll never find out the answers to these questions or any like them — at least not on the series — because we've never really found out about the interests of any of the stars or suitors on The Bachelorette or Bachelor . And it's really quite glaring once you start thinking about it.

When you start dating someone — or start any type of relationship with another human being, for that matter — you get to know them by asking questions about their interests. If you both like the same writers, it's a good sign. If one of you calls Ariana Grande your favorite singer and the other loves Insane Clown Posse, it isn't. I assume that JoJo talks about her interests with the guys on the show, because it'd be hard not to. It may seem like JoJo doesn't spend a ton of time with the men, but she's probably with them more than you think. As former suitor Derek Peth told Bustle, his one-on-one date with JoJo filmed for 14 or 15 hours. That's plenty of time to ask where someone wants to live, or where they see their career going, or how they feel about Pokemon Go.

As for why we don't see any of this show, I think it has to do with the show wanting to keep fans invested. If we hear JoJo and Chase, for instance, talk about how she loves going out to dinner with friends at least once a week and how he hates eating out a restaurants, we'll start feeling like Chase isn't going to be the one for her. (Yes, just because of their food preferences. Plenty of people who aren't on dating shows get turned off on a first date because of subtle differences; it's really not a stretch.)

On top of not wanting to give too much away, by not hearing the Bachelor/ette and their suitors talk about specific interests, the focus stays on the "love story." We hear them talk about their families and how many children they want to have (they all want to have children, apparently) and being "ready to settle down." If we heard that they wanted to travel the world or that one of their favorite pastimes was going out to bars (which is likely seeing as the cast is mostly in their twenties — JoJo is only 25!), the natural viewer reaction would be, "Well, these aren't people who are ready for marriage" (even if that is based on a stereotype of what "ready for marriage" is) and that doesn't fly because finding a spouse is the entire point of the show.

And I get that. But after a combined 32 seasons of The Bachelorette and The Bachelor, it's time to mix things up a little. We've gotten added drama in weird ways over the years, from the awkward return of booted off contestants to Chad's deli meat eating this season, so why not try to infuse some more intrigue in the show by including some more specific information about these people? I know personally I would love to see a Bachelorette roll her eyes when a suitor goes on about his favorite book being The Catcher in the Rye and how much he relates to Holden Caulfield, or see a woman get kicked off at a rose ceremony because she admitted that she never listens to music, like, ever.

Aside from the funny situations it could bring about, the most important thing about hearing the contestants talk about themselves in a more in depth way, is that when there were connections between a star and their suitors, fans would be able to understand it more and see how this crazy process can actually work.

Take Kaitlyn and Shawn from last year's Bachelorette season. These two seem like they really get along in the real world — much more than I would've expected when I saw them on the show — and their relationship has already lasted a year. It would've been cool to see them talking about how much they both like visiting tropical locales, doing water activities, or playing video games, all things that they've documented themselves doing since the show ended. And I'm sure something like this could be edited in a way that wouldn't give everything away. To use Kaitlyn's season as an example again, no amount of talking about water sports with Shawn was going to convince me she shouldn't have picked Nick while I was watching the season. And, also, I just have a lot of faith in The Bachelor editors' skills considering all that we've been through together.

The many seasons of the show I've watched already have confirmed that I'm going to keep watching this thing whether I hear about the contestants' fave pizza toppings or not. But I do know that I and many other members of Bachelor Nation would very much enjoy hearing about the weirdos who go for anchovy and pineapple. So come on, Bachelor producers, give us something else to tweet about.