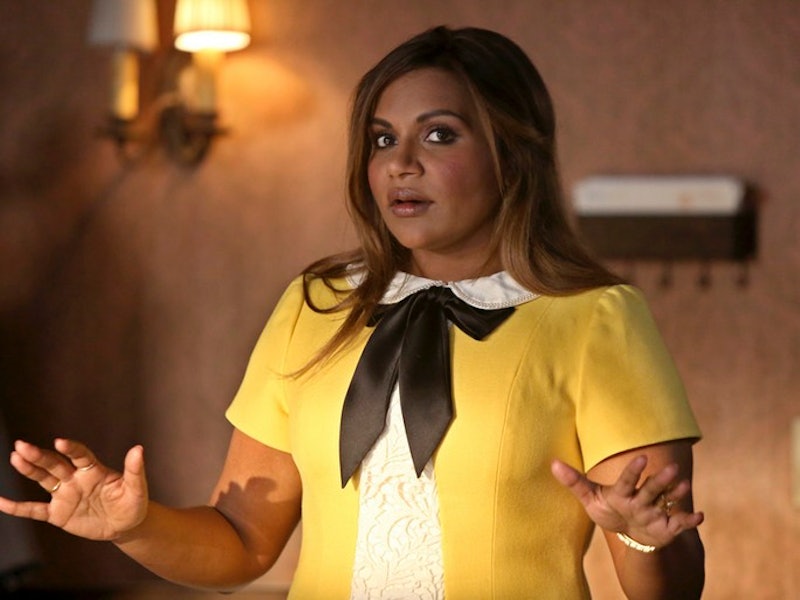 Once again, Mindy Kaling is receiving no love for her comedic talents. On Thursday, The Mindy Project was snubbed by the 2016 Emmys and it truly is a real shame. When is Kaling and her Hulu (formerly FOX) series going to get the respect it deserves? With so many great comedies and comedians out there, it's no easy feat selecting who should be recognized, but the awards and nominations for both Kaling and her show are long overdue. I adore The Mindy Project and can't help but bow down to the former Office star, and just like every other one, this snub hurts.

One of the many things I adore about the series is, of course, leading character Mindy Lahiri. Thanks to Kaling, she has broken barriers with Mindy. The OB/GYN is a hilariously flawed and diverse feminist, who embraces her true self and never tries to fit into the expected molds of society. It's refreshing to see such a leading woman in TV and I wish there were more characters like her.

In addition to Dr. Mindy Lahiri, The Mindy Project as a whole is a true success. Yes, sometimes it's not perfect, but what show is? That said, the comedy has taken risks, especially when it comes to the romance between Mindy and Danny Castellano. Since day one, it seemed like the two would be endgame, but that quickly changed once they had a child together. The way the comedy handles Mindy's motherhood journey brings a realistic and somewhat serious story line to a show that is filled with jokes and ridiculous moments. Watching Mindy choose to be a single mother and maintain her career over a relationship with Danny, well, that certainly hit home for many women.

The Mindy Project is so much more than jokes. It is a groundbreaking comedy that really should be getting more love. I guess there's always next year, but it would've been nice to see it this time around.

More like this
Jason Oppenheim Broke Down In Tears Over His Chrishell Breakup On The 'Selling Sunset' Reunion
By Bustle Editors
Sandra Bullock, Girlboss Extraordinaire
By Matt Harkins & Viviana Olen
Spice Girls’ Net Worth: The Richest Member Is Wealthier Than The Rest Combined
By Hugh McIntyre
50 Years After Creating Her Alter Ego, Angelyne Is Still Driving That Pink Convertible
By Gretchen Smail
Get Even More From Bustle — Sign Up For The Newsletter