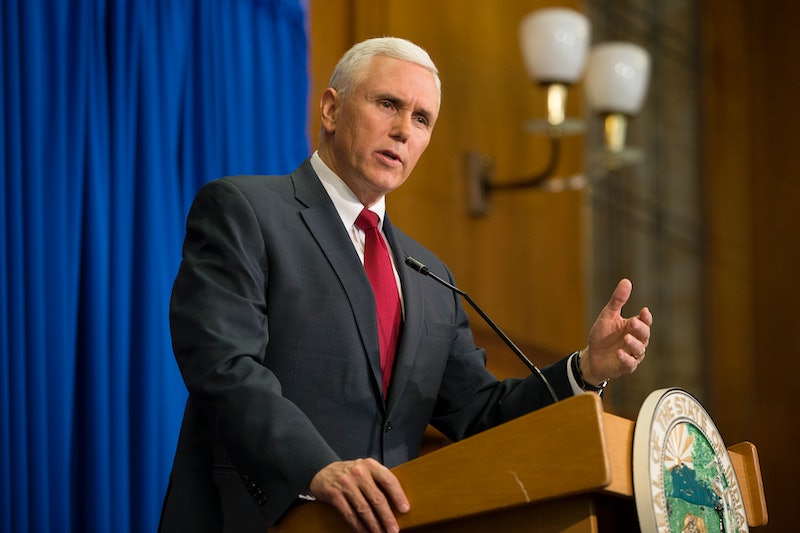 Earlier: Donald Trump may have some big news — according to a Reuters report, Donald Trump has possibly picked a running mate. But, as these reactions to Mike Pence's potential vice presidential candidacy reveal, there are many people who are less than thrilled by Trump's decision. Although Trump has yet to confirm that he has indeed picked the Indiana governor to join him in his journey to the White House, The New York Times has reported that the presumptive Republican nominee was leaning strongly toward naming Pence as his running mate. This latest news only adds fuel to that fire.

So who is Mike Pence, exactly? The Hoosier resident was elected governor of Indiana in 2012, and was officially inaugurated into office in 2013. Before serving as governor, he represented the 6th congressional district of Indiana in U.S. Congress. He has been rumored to be among Trump's top picks for VP, along with Chris Christie and Newt Gingrich.

But this isn't a done deal just yet. Shortly after news of the possible nomination broke, Jason Miller, senior communications advisor for Trump, tweeted that a final decision has not yet been made by Trump, and that he would officially announce his vice president pick at 11 a.m. on July 15.

However, the internet, as always, was quick to react to news of Pence's potential nomination, with many people taking to Twitter to voice their misgivings about the possible candidate. We don't know for sure if Pence is Trump's go-to candidate yet, but as these reactions show, if Pence is indeed the new vice presidential candidate, it's definitely a controversial pick.