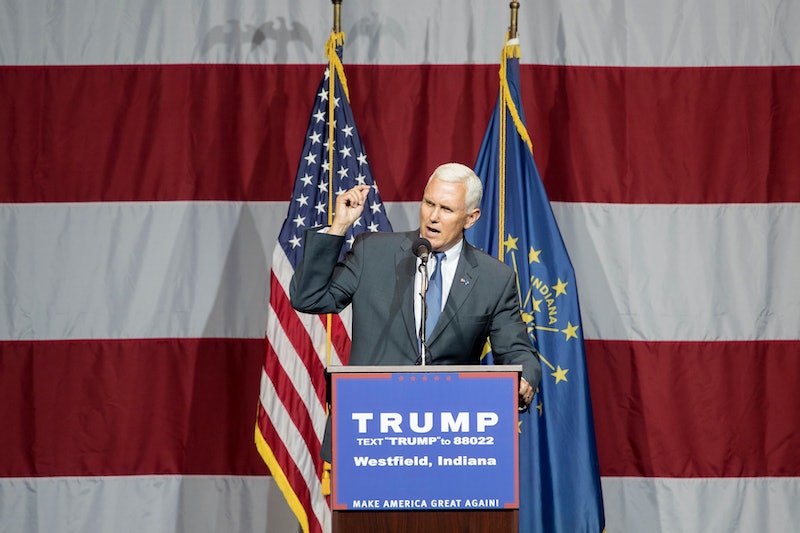 Earlier: Presumptive Republican nominee Donald Trump is set to announce his presidential running mate on Friday, but early reports suggest that Trump chose Mike Pence, the governor of Indiana. The announcement comes just days ahead of next week's Republican National Convention in Cleveland, OH, where the party will formally announce their nominee. But what do Republicans think of Mike Pence?

The Indiana Governor was the subject of a joint ACLU and Planned Parenthood lawsuit earlier this year after signing a bill that would ban certain abortions and criminalize doctors who provided the service in those cases. However, that wouldn't seem like much of a setback for Republicans, whose presidential platform will focus on cutting abortion funding. According to the Hill, republican lawmakers believe that Pence as Trump's running mate would help unify the party moving forward.

Senate Republican Whip John Cornyn of Texas told the Hill, "Pence looks to me like a pretty attractive package. He’s got the experience and he’s got broad appeal within the traditional Republican circles." Pence seems to be a popular pick among Republican politicians across the board who note his political experience and conservative values. Conservative news outlet Breitbart noted, that Pence would bring "constitutional fidelity, conservative credentials, traditional faith," among other values to a Trump campaign.

Arizona Sen. Jeff Flake, who has been hesitant to endorse Trump as the party's nominee and said he would not attend the RNC, told the Hill that he is a supporter of Pence, suggesting that he "probably has a better chance of moving [Trump], perhaps, where he should be." Flake also suggested that choosing Pence as a running mate is "the best choice Donald Trump has made so far."

Even South Carolina Sen. Lindsey Graham, who was far from supportive of a Trump nomination throughout the primaries approves of Pence as "A good choice. Solid conservative," according to Bloomberg Politics. If unifying the Republican party played a role in Trump's running mate pick, then it looks like Pence is doing just that.

According to the latest Times/CBS News poll, Trump and presumptive Democratic nominee Hillary Clinton are tied with voter support at 40 percent. Trump closed the gap after the FBI reported that, while Clinton's email practices were "extremely careless" and "negligent," she would not be indicted.