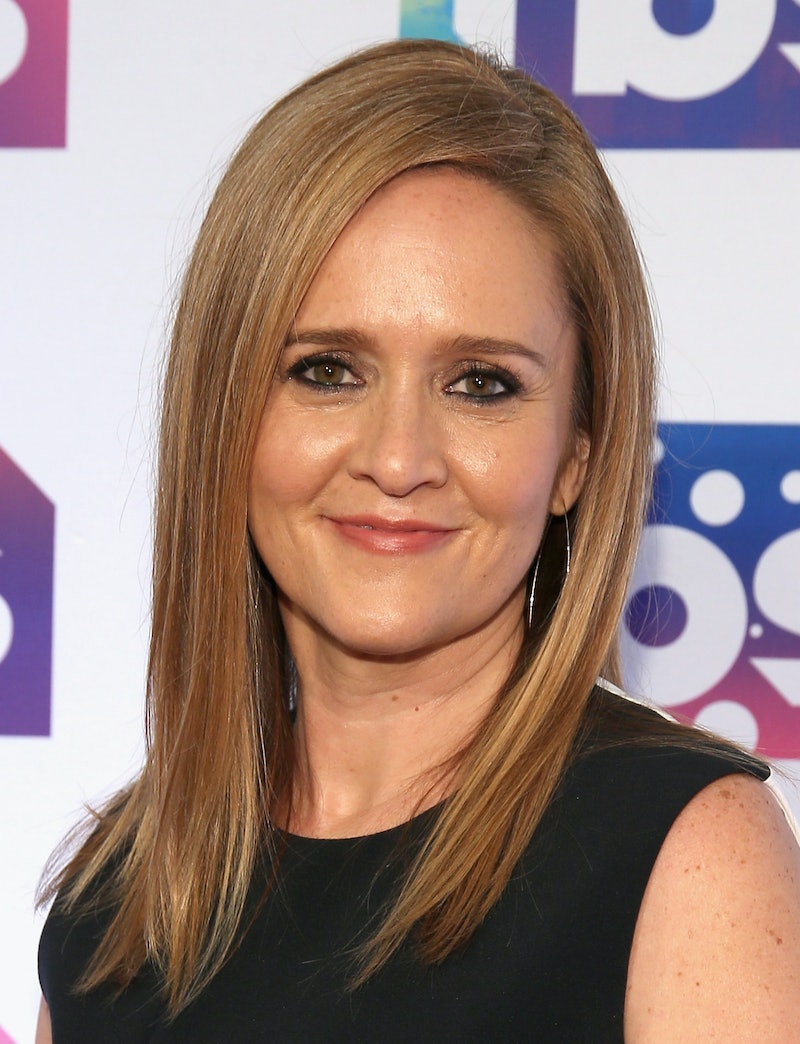 When it comes to late night hosts, Samantha Bee has once again been overlooked. The first time, it was by Vanity Fair, when the magazine did a photo spread of the new faces of late night — all of which were male, most of which were white — and somehow forgot to ask her, the first female late night host, if she wanted to come down and add a bit more diversity to the shot. This time though, it was the 68th Emmy Awards. If you peruse the list of 2016 Emmy nominees you'll notice Bee's name is nowhere to be found in the Outstanding Variety Talk Series category. While she managed to fix Vanity Fair's mistake by Photoshopping herself into the picture as a centaur who shoots lasers from her eyes — the tweet just read, "BETTER" — Bee's 2016 Emmy snub will be harder to fix. Unfortunately, Bee has a lot of history working against her when it comes to this category.

The Outstanding Variety Series category, which last year was split into two categories, Outstanding Variety Talk Series and Outstanding Variety Sketch Series, has always been a bit of a sausage fest. Jon Stewart's The Daily Show took home the prize 10 years in a row. David Letterman's Late Show won six of these awards. In the 2000s, not one female-fronted show has been nominated, an unfortunate record that continues this year.

When it comes to female-led shows, nine have won the Outstanding Variety Series prize since 1951, but not one of those wins would have been considered a variety talk series. No real surprise, since female late night hosts haven't really been a thing until now. But, a sadder stat may be that only two female show creators have won a variety series Emmy in the last 50 years: Tracy Ullman and Carol Burnett. Bee, could have been the third, but alas, this year's nominees — Comedians In Cars Getting Coffee, Jimmy Kimmel Live!, Last Week Tonight With John Oliver, The Late Late Show With James Corden, Real Time With Bill Maher, The Tonight Show Starring Jimmy Fallon — continue to follow in the homogenous trend.

It's hard to say Bee is somehow better than any of these hosts, because the word "outstanding" can be defined in many different ways. But, to me, an awards show is supposed to honor creativity, celebrating art that seems to be pushing the medium into a new bold and daring direction. This is exactly what Bee is doing with her show. In the short time she's been on the air, Bee's changed the landscape of late night, and not because she's female. It's because she's come up with a show that seems to get at people's anger in a productive way. There's conviction behind every one of her jokes. She's looking to surprise her viewers by doing things a little differently than the late night hosts they've seen before. She's not behind a desk, or interviewing celebrities; she's talking about untested rape kits and going after politicians who are trying to enact dress codes that only apply to women.

After the mass shooting Orlando, Bee didn't want to "deliver some well-meaning words about how we will get through this together, how love wins, how love conquers hate." No, she was too angry for that. "Is it okay, if instead of making jokes I just scream for seven minutes?" she asked, before having a much needed discussion about gun control and what the U.S. really needs to do to fix the problem. The words may not have been as kind, but they needed to be said. Bee was brave enough to be the one who said them.

What she is doing on Full Frontal feels very of the now. Not because it's trendy, but because it feels important to what the world is experiencing. She's become a voice for those who don't always feel they have one, covering stories that to others may seem niche because they involve women or minorities, but to her seem universal. Behind the scenes, she's also looking to empower people that don't always get the opportunities to speak their minds, hiring a diverse group of writers that can tell different stories.

In the end, Bee's show is about inclusion and it's a shame that the Emmys didn't include her in their list of outstanding variety series. Like that Vanity Fair photo, this year's Emmy ballot would have been much BETTER with Samantha Bee. Too bad the Academy didn't realize that.

More like this
Lydia Leonard Is Setting The Record Straight
By Olivia-Anne Cleary
Sandra Bullock, Girlboss Extraordinaire
By Matt Harkins & Viviana Olen
Spice Girls’ Net Worth: The Richest Member Is Wealthier Than The Rest Combined
By Hugh McIntyre
Selena Gomez’s ‘SNL’ Hosting Debut Had Twitter Gushing Over ‘Barney’ & Wigs
By Stephanie Topacio Long
Get Even More From Bustle — Sign Up For The Newsletter