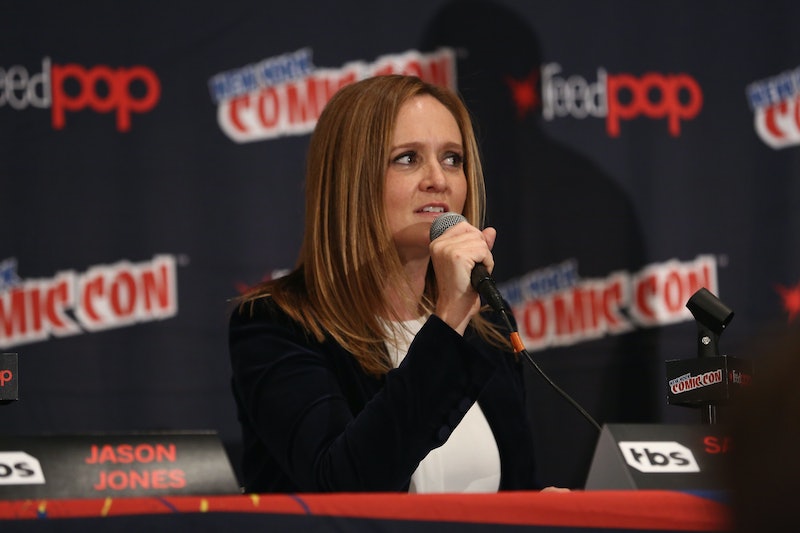 In February, comedian Samantha Bee will officially become the first female late night host. It's a conversation starter, and one that Bee seems more than willing to have. But she's not interested in harping on this milestone. instead, she'd like to talk about her balls. Yes, in the ad campaign for her upcoming show Full Frontal With Samantha Bee , the former Daily Show correspondent makes it very clear, her balls — her "10-pound lady balls," to be exact — are as big as any of the other late night hosts. It's a bold statement, but one that Bee is more than able to back up with a career that has her taking on anyone and everyone that underestimates her. This ad campaign for her show makes it clear that she's not interested in perpetuating the idea that because she's a woman she's somehow different than the men who have been doing this for so long. Instead, she's decided to be a bit antagonistic.

While on The Daily Show, Bee was usually the only woman in the room, and often the smartest, having a laugh at the expense of men who didn't seem to understand women's issues, or want to for that matter. In some of her funniest moments, she poked fun at what it means to actually watch MSNBC's Morning Joe and talked to Republican voters about Bristol Palin's choice while masterfully connecting the dots to a woman's right to choose. In one teaser that debuted in May, Bee is looking at a wall of photos of the current hosts of late night television. "When I take a step back, I feel like something's missing?" she says before being served some sausage.

Yep, she's the only woman at a sausage party where they're only serving mild and extra mild, switching between quick cuts of Carson Daly and new Late Late Show host James Corden with each flavor's announcement. "You know what, I think I'm done with sausages," she says with a smile. Whatever kind of hors d'oeuvre Bee wants to be, it's bound to spice up this rather bland mix on the current late night menu.

This has been the theme of her early promos; teasers that feature her having fun at these guys' expense. She's forcing them and everyone else to talk about the issue at hand and not put iy on her to be the female ambassador of late night. That's not who she wants to be. Just as Mindy Kaling said that she didn't ask to be the first Indian-American woman to get her own show, Bee did not ask to be the first female late night host. It's actually a little sad that she is after all these years, something she wants to make very, very clear with every well-timed joke. But also something she doesn't want to be forgotten, as she let Vanity Fair know when she tweeted her "better" version of their all-male late night photo that accompanied a story about the current late night sensations.

Bee doesn't plan on trying to represent everyone. This is not a show specifically for women because she is a woman. She's just going to do what works for her, and that's going to have to be fine with everyone else. But, no matter what, she's going to be a different choice. A bolder choice than what we've been used to since, as she proclaims at the end of that sausage party, she's "female as f**k." And being so has made it even more fun for her to play with the idea of femininity, especially on television. Subversively getting people to think about it without really saying it.

In her latest teaser, she jumps on the Star Wars: The Force Awakens bandwagon and pokes fun at the idea that woman aren't really supposed to be the be stars in a galaxy far, far away. It's a similar opinion some have taken when it comes to the late night galaxy. When Bee comes into the cantina, dressed in a Jedi cloak, she's not looking to fight, just to nicely let everyone in the cantina know when her shows premieres. Unfortunately, she's a little new with the lightsaber and manages to kill a few guys while trying to figure out how it works. Symbolism for her own hosting debut perhaps?

She's not going to be perfect, but it has nothing to do with her being female. Taking on the role of a new late night host takes some time. Remember Jimmy Fallon's first year? Probably not, because it was nothing to write home about. Fallon was rather awkward with guests, too starstruck to have an actual conversation. But this would later help him develop other ways to interact with the guests (games, skits, and more games) that suited him better. This all takes time, and Samantha Bee will deserve that too when the time comes. "If you like smart, edgy satire about world events then you are going to love my new show," she says to end the teaser. And we're not going to argue with that.

What's so interesting about these promos is they focus on what a Samantha Bee show will be like, not what a female hosted late night show will be like. With these advertisements, her point is to twist the knife in the backs of those who want to think this is happening in a vacuum ever so slowly, having a bit of fun being the first woman invited to the sausage party. Bee has also set a precedent for women in late night to just be themselves. It's the same opportunity every male has been given when they take over a late night show. She's not here to sit on her hands and just be happy she got a show of her own. She wants to break through that glass ceiling — maybe with a lightsaber, who knows? So, sorry fellows, Bee's here to win and more than willing to step all over you to get there. Possibly in heels.