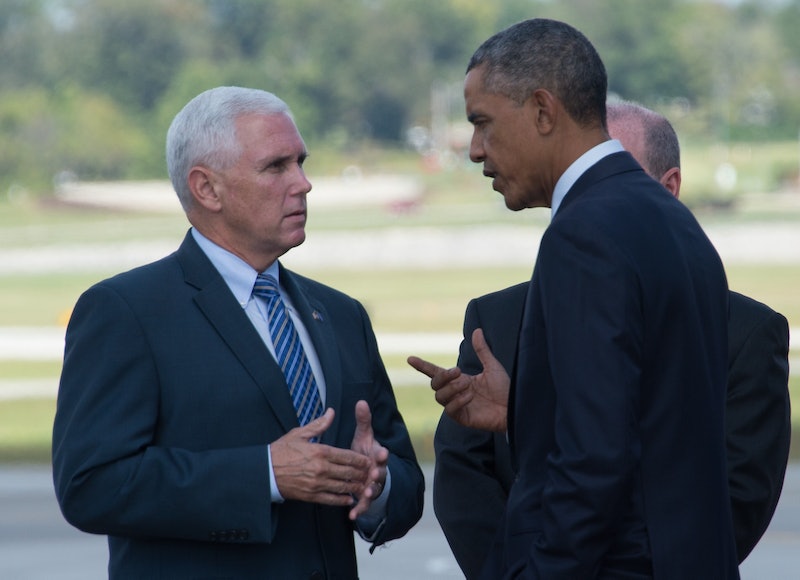 Earlier: According to a Reuters report Thursday, presumptive Republican presidential nominee Donald Trump will announce Indiana Gov. Mike Pence as his vice presidential running mate on Friday. Though Trump's senior communications adviser has said he hasn't made a decision yet "and will be announcing at 11 a.m. tomorrow as planned," even the Indianapolis Star is reporting that he is, indeed, Trump's VP pick. This is a scary prospect for many minorities in the United States — perhaps most notably the LGBTQ population, given Pence's record on gay rights. But it's also important to know where Pence stands on immigration — and given that he may be Trump's vice presidential nominee, it's no surprise that Pence is staunchly anti-immigration — both illegal and legal.

Here are six things you should know about Gov. Pence's record on immigration:

1. He Wanted To Report And Deport Undocumented People In The Hospital

In 2004, then-Senator Pence voted for Undocumented Alien Emergency Medical Assistance Amendments Bill HR 3722, which would have required hospitals to gather and report information on possible undocumented patients before hospitals could be reimbursed for treating them. The bill would have also stated that hospitals wouldn't be required to provide care to undocumented people if they could be transported to their home country (aka deported while they're in the hospital) without a "significant chance" of their condition getting worse. Luckily, the bill failed.

The very conservative Federation for American Immigration Reform (FAIR) is a national, nonprofit, public interest membership organization that seeks to "improve" border security and stop illegal immigration. A 100 percent rating from them is a like a stamp of approval that Pence is throughly anti-immigration.

3. He Wants To Declare English The Official Language Of The United States

In 2007, Pence co-sponsored a bill that would have declared English the official language of the United States and made it mandatory that anyone seeking naturalization speak fluent English. The bill did not make it out of committee.

4. He Believes In "No Amnesty" Immigration Reform

In June 2006, Pence unveiled a plan he called "no amnesty immigration reform," which consisted of increased border security and strict enforcement of laws against hiring undocumented workers, including a guest worker program that required potential participants to apply from their home country to government-approved job placement agencies that match workers with employers who cannot find Americans for a job. Amnesty is designed to help political refugees who are at risk of violence in their home country relocate to safety.

5. He Wants To Block Syrian Refugees From Coming Into Indiana

In 2015, Pence announced that he was ordering state agencies to suspend the relocation of any more Syrian refugees to Indiana until he received assurances from the federal government that "proper" security measures had been taken. In 2016, a Federal Judge ruled that Pence could not block refugees or funds for resettlement from coming to Indiana. Pence ordered the attorney general’s office to seek an immediate stay on the judge’s action and appeal it.

6. ... But He Once Slammed Trump's Proposed Muslim Ban

Now here's something liberals might actually agree with Pence on. Surprisingly, considering the rest of his record, Pence tweeted in 2015 that he did not support Trump's proposed "Muslim Ban," which would aim to restrict Muslims from coming into the United States. If he is indeed the VP nominee, we'll have to see if that position sticks.

More like this
Footballer Jake Daniels Shared His Thoughts On A World Cup Boycott
By Sam Ramsden
Buckingham Palace Aide Resigns Over “Unacceptable” Comments To A Black Guest
By Shahed Ezaydi
Joe Lycett Just Took HIs David Beckham Qatar Protest To A Whole New Level
By Sophie McEvoy
Iran Has Issued A Death Sentence Over Mahsa Amini Protests
By Catharina Cheung, Darshita Goyal and Maxine Harrison
Get Even More From Bustle — Sign Up For The Newsletter