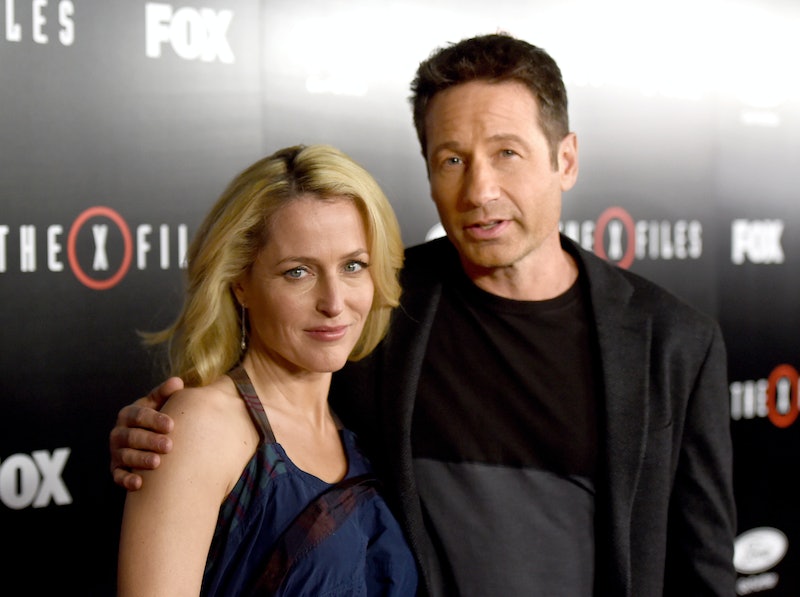 If you took a cursory glance at today's pop culture landscape, you would be forgiven for thinking you'd somehow slipped into a wormhole back to the 1990s. A Pokémon game is all the rage, a Power Rangers movie is on the horizon, and an X-Men TV series is headed to FOX. Oh, and The X-Files was one of the highest-rated shows of the year. Despite our collective joy at seeing David Duchovny and Gillian Anderson back in their formative roles as FBI agents Fox Mulder and Dana Scully, our society's current wave of '90s nostalgia was unfortunately not enough to carry either of them to a 2016 Primetime Emmy nomination. Fortunately for us, Gillian Anderson had the perfect response to her Emmys snub.

After the nominations announcement this Thursday morning, the actress posted a screenshot on Twitter of her and co-star Duchovny onstage together at an awards ceremony sporting… shall we say… interesting wardrobe choices. "Shame they didn't nominate us," Anderson wrote. "Just think what fashion trends we might have started." (A little digging reveals that the screenshot in question is from the 1995 Emmy ceremony, when the pair presented the Supporting Actress in a Drama Series trophy to ER star Julianna Margulies.)

For the record, both Anderson and Duchovny already have Emmy nominations under their belts for their X-Files characters. Back in the show's heyday, Duchovny was nominated twice and Anderson was nominated four times — winning once, for the show's fourth season.

The X-Files wasn't the only show Anderson was passed over for this year, either. The actress was also in the running for Outstanding Supporting Actress in a Limited Series or Movie for her role as Anna Pavlovna Scherer in the BBC miniseries War And Peace . And although she was never officially submitted to the Television Academy for it, she could have very easily been in contention for her supporting role as Dr. Bedelia Du Maurier in NBC's Hannibal . (Needless to say, Anderson had a very good year.)

Netflix's crime drama The Fall took this past year off, but it will be back in 2016 for a third season; perhaps Anderson will manage to accrue some Emmy attention for that starring vehicle. In the meantime, we can hope that she and Duchovny show up to present together at the 68th Annual Primetime Emmy Awards on Sunday, Sept. 18 — preferably in carbon copies of those amazing '90s outfits.