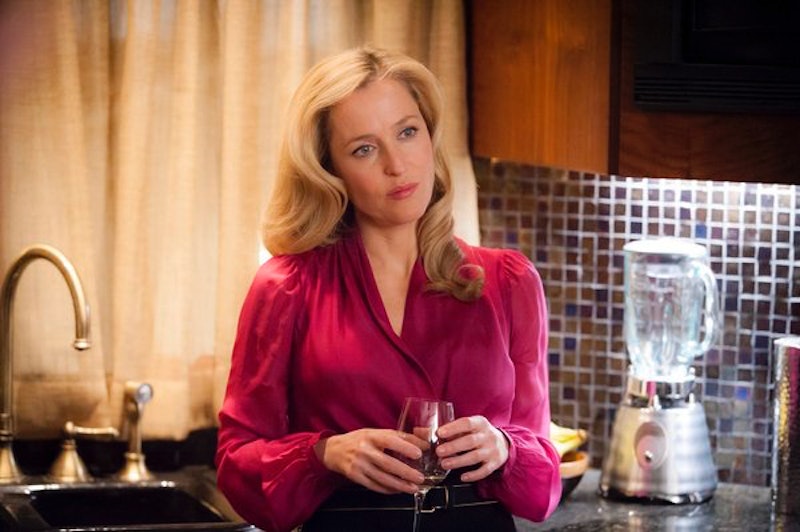 The penultimate episode of Season 2 of NBC's darkest thriller airs this Friday and with it comes good news: Gillian Anderson is back on Hannibal. Her character, Dr. Bedelia Du Maurier, is Hannibal's therapist who has the potential to blow the lid off everything. We had a feeling she would return before the end of the season, and we have a couple clues that now seal the deal.

"Jack even produces another surprise witness to Hannibal's mayhem," reads NBC's official preview synopsis. (The first surprise witness was presumed-dead-but-secretly-living Freddie Lounds, who popped up at the end of last Friday's episode.) Upon reading this we immediately assumed this new witness would Bedelia, who, after Hannibal killed one of her patients right in front of her, has firsthand knowledge of Hannibal's terrifying violent streak. And now, logline information for Episode 12 has confirmed Anderson as a guest star.

Let's just take a moment and imagine Freddie and Bedelia hidden away, alone and uncomfortably silent in a room together, wondering which of them Hannibal wants to kill more and where the other got her blouse.

Apart from how awkward any interaction between Freddie and Bedelia, the latter's impending return, along with a few tidbits about what's happening with Anderson, has us wondering about a few things.

What Exactly Does She Know?

Bedelia has never come right out and said to Hannibal, "I know you murder and eat people," but in her explanation to Hannibal when she dropped him as a patient she says, "I've had to draw a conclusion based on what I glimpsed through the stitching of the person suit that you wear. And the conclusion that I've drawn is that you are dangerous."

She might not know Hannibal a cannibal, but she knows he's capable of extreme violence — after all, it's been implied that a Hannibal killed a patient who was attacking Bedelia.

Will She Survive Until Season 3?

Hannibal's had it out for Bedelia since she left early in Season 2. He was all set to murder and most likely eat her, but she skipped town before he had the chance. Though we'd wondered if Hannibal had tracked down Bedelia and killed her offscreen, apparently he was a good sport about the whole thing.

However, his anger resurfaced a few episodes ago when Will revealed that Bedelia visited him in prison and said "I believe you." If Hannibal realizes Bedelia's back in town, his bloodlust might reach an all-time high.

Could She Become a Series Regular?

If Hannibal doesn't eat her, Bedelia definitely has the potential to become a regular cast member. The only other project Anderson really had on her docket was Crisis, which NBC decided not to renew. Maybe whoever had the ultimate say is a Hannibal fan who wants Anderson free to be Bedelia full-time...