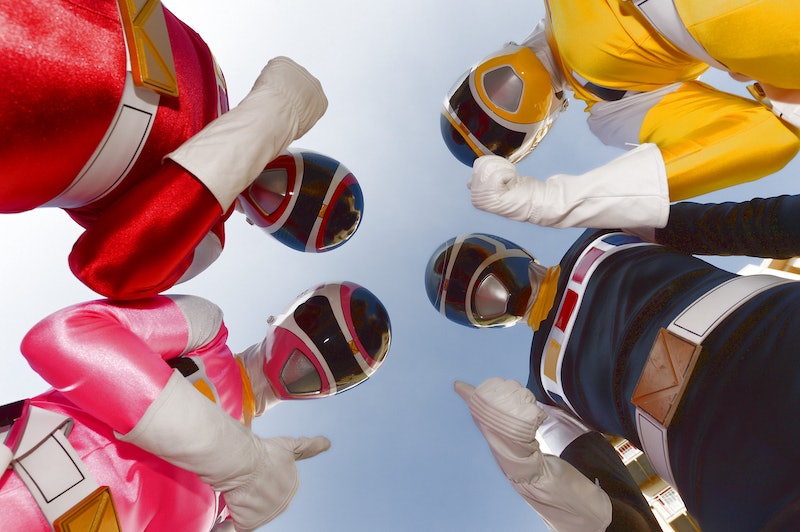 Those who fought to be the pink Power Ranger and avidly watched the TV show while they were children will probably be returning to the Power Rangers franchise as adults. Character posters for the Power Rangers movie were just released, showing the faces of all five of the new actors playing the live-action Power Rangers up close for the first time. For those who weren't aware that these childhood superheroes were coming back, the 2017 movie will update the mythology from the original Mighty Morphin Power Rangers series from the early '90s.

While you might have only known the rangers from the colors of their suits, the names on the character posters are from that original show. The movie will feature Dacre Montgomery as Jason the Red Ranger, Becky G as Trini the Yellow Ranger, RJ Cyler as Billy the Blue Ranger, Naomi Scott as Kimberly the Pink Ranger, and Ludi Lin as Zack Black Ranger. It's a diverse group of teens who are all relative newcomers.

In the movie, simply titled Power Rangers, these five Rangers will band together to fight an alien invasion. Elizabeth Banks is portraying the villainous Rita, while Bryan Cranston was cast as Zordon, who you might remember as their leader. It was announced all the way back in 2014, and director Dean Israelite described the tone he was going for as "mature but playful." Images of the full Power Ranger suits, Banks as Rita, and an official poster have previously been released. Now we can add these amazing posters to the group.

From the look of the posters, the film will be edgy and stylish, maybe like Tron, with an amount of teen angst and attitude as well. Thankfully, they've avoided the unfortunate connections between the race of the characters and the color they're associated with that many critiqued in the original show. It looks like they're on the right track with this one.