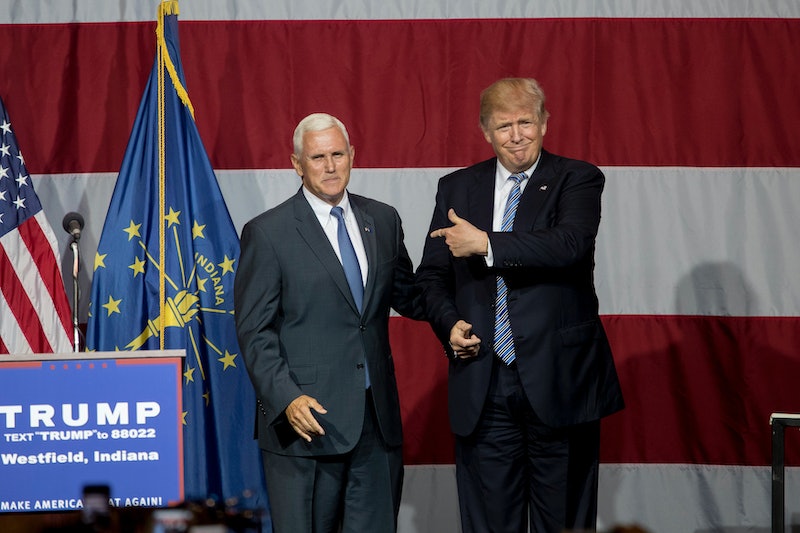 I do not know Republican Vice Presidential candidate Mike Pence well — but he has taken a dip in my parents' pool. Like Pence and his family, I am from Columbus, Indiana, and grew up in the same neighborhood as the Pences. They were hardly at their one-story, red brick home in my subdivision, but on the occasional family walks, we would see Audrey riding her bike in the driveway, Michael playing with his iguana, and Mike and Karen sitting on the porch.

Before I was in junior high, when Pence was the House Republican Conference chairman, my parents put a pool in our backyard. One evening, my swim was interrupted with the Pences coming to check out the pool. I believe my dad even offered Mike a drink (my memory fails me to remember if he accepted), and I remember his kids taking up space in my pool. At first, they were unwelcome guests — the pool was new to me and I wanted it to myself. Then, they were fun to have around. They stayed for a couple hours, then went back across the street.

While that particular story does nothing more than serve as an amazing ice-breaker or "interesting fact" at happy hour, having something of a connection to Pence intrigued me enough to follow his career more than I do most politicians. It has been inspiring to see him rise from radio talk show host to now the potential vice president of the United States of America. To think he came from my hometown, went to a small university, lived in my small town, and rose through the political ranks also meant I could rise to something of my own.

I am a Republican and I have a personal relationship with Jesus. Those facts about my personal beliefs do not make me like Pence, but I do. He certainly does not make me like Donald Trump — but I do think Pence will be a good running mate for him.

That's not to say Pence has not had his negative associations in Indiana in recent years. Many teachers, many of my friends who are now educators included, claim his revisions to Indiana's educational system are misguided and don't appreciate his telling them to not take test scores "personally." His action that caused the most headlines, however, was the "religious freedom" law he signed in April 2015. This law allowed individual or corporate businesses to cite religious beliefs for not serving clients or in a lawsuit. Many claimed the law was discriminatory against LGBTQ people, and in its former wording, I can see why many believed that was the intent of the bill.

But when Pence was receiving push-back for his religious freedom law, he did not push the agenda forward. Instead, he listened and changed the wording of the law a week later to clarify that the RFRA law would not allow businesses to discriminate against LGBTQ communities or couples. Though the different syntax did not win over the hearts of many, I also admire Pence for sticking to a law he believed in and dreamed of passing.

I also believe he respects differing ideas. His own daughter, Audrey (who, yes, also swam at my pool!), is a self-proclaimed libertarian. She admitted to voting for her dad in the last election, but only because he "won her over." Pence is proud that his daughter has her own beliefs, not simply believing everything laid in front of her. He respects that. And I respect that about him.

I am a Republican and I have a personal relationship with Jesus. Those facts about my personal beliefs do not make me like Pence, but I do. He certainly does not make me like Donald Trump — but I do think Pence will be a good running mate for him.

To me, Pence represents what it takes to come from a small town and fight to for your dreams. He represents standing up for personal beliefs, though they may be the unpopular opinion. He represents a person in leadership listening to his audience, and having the courage to adapt. He represents a leader with a relationship with Jesus, as well. Though not all have agreed with his decisions, that is hard to find in any politician.

Trump has made a fool of himself in this election, and he has made a fool of America. In my opinion, Mike Pence has been a stable politician who has fought for his dreams and taken the time to listen to people before enacting laws. Trump needs someone who will encourage him to listen, and someone who will listen to outside beliefs himself. Pence has done that in his career, and he has done that within his own family.

That said, a vice presidential candidate will not sway my opinion in this particular election. In fact, I'm almost disappointed that Pence accepted Trump's invitation and associates himself with his candidacy. With more time, Pence could have made an even better name for himself.

This November will be my first opportunity to vote for president, and boy, do I have my pickings cut out for me. Who I vote for in the next few months is not a decision I wish to broadcast before or after I cast my ballot. But I will say this: We may not need to worry about this duo taking over the White House at all. But if we do, Pence, in my opinion, is a solid choice for vice president.