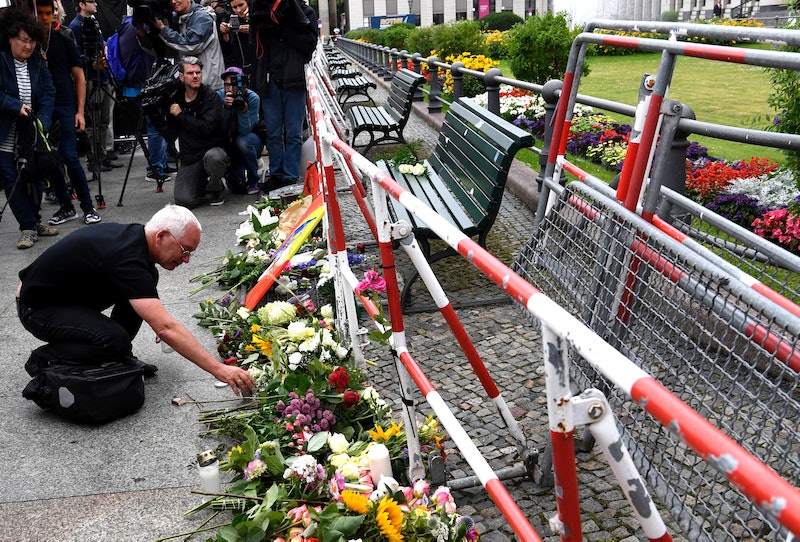 On Thursday night, a Bastille Day celebration in Nice, France took a tragic turn when a lorry-truck plowed through a crowd gathering at the Promenade des Anglais, killing at least 84 people. There was not too much available information immediately following the incident, prompting many to jump to their own conclusions. Following Thursday's events, some took to the internet to share conspiracy theories of the Bastille Day attack that should probably not be circulating — for various reasons.

One website suggested that the number of casualties of a truck crashing through a crowd seems improbable. They also questioned how the driver was able to access the Promenade, especially given the country's State of Emergency measures and a likelihood of heightened security due to the celebrations. One person took to Twitter to suggest that it's strange that a Bastille Day movie was released this year, and ask, now there's an attack, "Coincidence? Conspiracy theory?"

Another website suggested that the incident was predicted weeks ago by "Light of Mary." They wrote, "Pray for Europe, it will be prey to terrorism." However, the theory falls flat either way, because the Islamic State reportedly called for attacks across Europe in the wake of the Brexit vote. Some redditors suggested that the timing of the attack seemed "like a strange coincidence," specifically because the day of the attack, French President François Hollande said the country's "State of Emergency" would be lifted on July 26. Many implied that it was an "inside job" and was politically motivated to further an airstrike campaign on Raqqah, Syria.

It can be harmful to engage in and spread theories about what may have occurred, however, and it is also harmful to jump to conclusions about who committed an act of violence and why.

More like this
How To Fight For Reproductive Rights, Based On How Much Time You Have
By Courtney Young
Manchester Arena Attack 5 Year Anniversary
By Ella Glover
President Zelensky Spoke Out On Ukraine's Chances Of Hosting Eurovision Next Year
By Sam Ramsden
10 Times Diana & Meghan Spoke Similarly On The Royal Family
By Sophie McEvoy
Get Even More From Bustle — Sign Up For The Newsletter