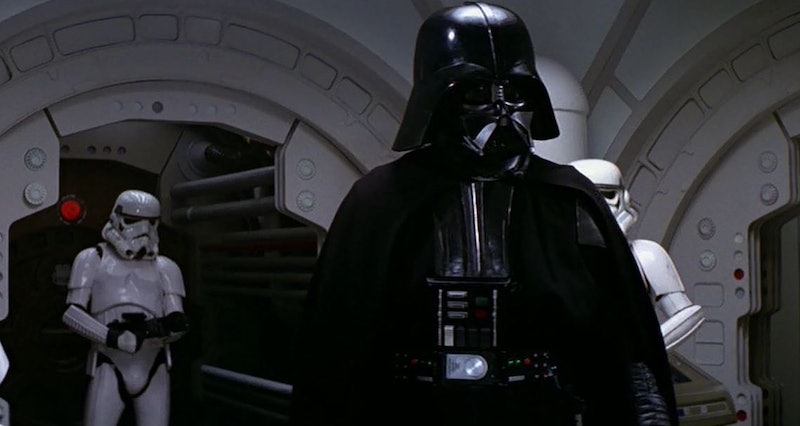 You may be concerned about how the gritty intergalactic war movie Rogue One is going to stray from the original franchise, but now you can rejoice, because an old favorite is coming home: James Earl Jones has been confirmed to return as Darth Vader in Rogue One at the film's Star Wars Celebration Europe panel (director Gareth Edwards told the crowd at the panel that hearing Jones record gave him a full on "nerdgasm," so this is all very real.) This is wonderful news and if the new Rogue One trailer that debuted at Star Wars Celebration on Friday is any indication, he's going to have a substantial role in the standalone flick.

The end of the trailer, which tragically won't be available to us normals for a long time, teases Darth's return as he hovers over a map of the Death Star. The lighting casts a shadow of his iconic, foreboding silhouette, and the audience can hear his staggered breathing. And then, presumably, they stop breathing because oh my God, do you know how long it's been since this character had any sort of fair treatment in the films?

I mean, "fair treatment" sounds kind of silly given Darth Vader is basically space Hitler, but do hear me out on this: the legacy of Darth Vader is in a strange place right now.

I hate to do this, but I always need to backtrack a bit. The prequels, created to show the path of the fallen Jedi (and also rake in gazillions of dollars) kind of worked to castrate dear old Darth. First by showing him as a whiny child with zero voice volume control, and second by showing him as a whiny adult who has an inexplicable aversion to sand. Whiny doesn't bode well with Darth Vader as well as it does with his son, or by extension of that, his grandson. This is someone meant to look formidable, evil incarnate. So, while an effort was made to make Vader look human, it really only hurt the character. In essence, Anakin Skywalker really helped to kill Darth Vader, not the other way around.

And then you have Force Awakens, in which the ghost of Darth Vader has inhabited Kylo Ren. Kylo, the Star Wars universe's quintessential goth teenager, has sort of commodified his grandfather's evilness as something to work toward, Dark Sidespiration, if you will. The sequels do respect Vader's history as a monster, and there's certainly horror in seeing that darkness resurface in the Skywalker bloodline yet again. Still something about the Knight of Ren's obsession with Vader turns him into a Joy Division Unknown Pleasures T-shirt: a beacon of darkness that Kylo Ren maybe doesn't exactly understand to the fullest extent.

So it's crucial for Jones to make his triumphant return to the series in an expanded way, not just in a quick, canned recording way ala Revenge of the Sith or his brief appearances on Star Wars Rebels. Granted, I do not approve of a man who would blow up his daughter's home planet for the thrill of it all. But as a character, as an antagonist, as the American Film Institute's number three villain of all cinema, his reputation needs to be restored to its original glory. And let's face it, there's no one else who can breath life into him like Jones can.