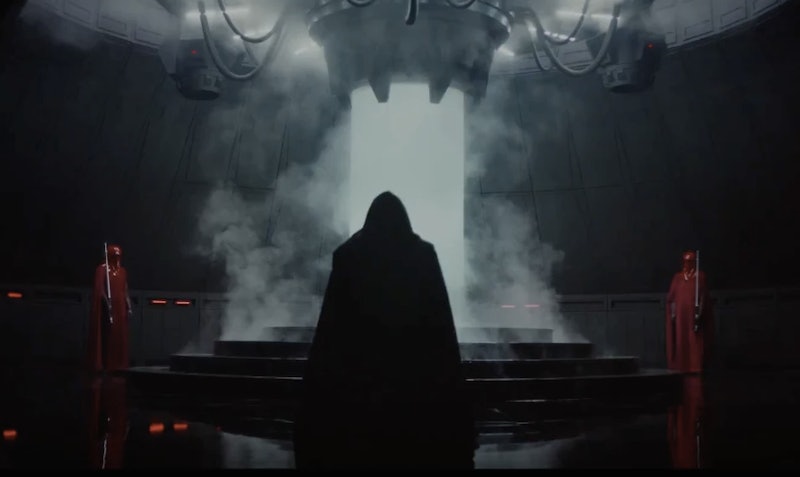 As if all of the hype surrounding the Blu-Ray and Digital HD release of Star Wars: The Force Awakens wasn't already enough Star Wars for one week. Now fans can start gearing up for yet another adventure from a long time ago in a galaxy far, far away with the release of the Rogue One trailer, the very first Star Wars spin-off story. Rogue One takes us back to a time in between Episode III and Episode IV, when the plans for the Death Star were underway and the Rebels — aside from our three main heroes: Leia, Luke, and Han Solo — were desperately trying to get their hands on them. We are returned to the time of The Empire's rule, long before the days of Kylo Ren and the First Order, when Darth Vader is in charge. And, if that concept in itself isn't already exciting enough, Darth Vader was in the Rogue One trailer — maybe.

Despite the fact that there is no actor currently listed to reprise the role of Darth Vader, we do see a dark cloaked figure at the 1:18 mark and faintly hear what could be mistaken as a Darth Vader breath at the 1:29 mark. Just watch the trailer for yourself to see what I mean, because fans didn't miss that at all.

The trailer itself is a lot to take in at it's first watch. With AT-ATs on their feet again and the introduction of the film's female protagonist, Jyn Erso (played by Felicity Jones), it's easy to miss that breath or even piece together who the dark-cloaked figure may be. But, when you remember that this film is centered around the creation of Darth's greatest weapon — the Death Star — it basically seems impossible for the film to exist without the newly turned Anakin Skywalker. And, while it has been reported that Darth Vader may possibly be appearing in the film mostly in the form of a hologram, the trailer gives all new insight.

In fact, considering the placement of the possible Darth Vader breath within the new trailer — and the look on Jyn Erso's face at the 1:29 mark — I wouldn't be surprised if Jyn herself ended up face-to-face with the infamous Sith Lord. But, considering that this rebel doesn't seem to possess the powers of the Force herself, hopefully she encounters him after she's able to get the plans for the Death Star to the leaders of the Rebellion. If Darth Vader does find out what she's up to, I can't imagine that ending well for her.

The re-awakening of Darth Vader is just the beginning for Star Wars fans. Lucasfilm and Disney have two other spin-off films currently in the works that are set to focus around other famous characters from the series, including Han Solo and Boba Fett. Until then those are released, prepare yourself for the return of Star Wars' greatest villain, Darth Vader. (You'll get there someday Kylo Ren. Maybe.)

More like this
Margot Robbie Breaks Her Silence On *That* Viral 'Barbie' Moment
By Maxine Harrison
The First 'Percy Jackson & The Olympians' Teaser Comes With An Ominous Warning
By Grace Wehniainen
Harry Potter's Viktor Krum Has Undergone A Huge Transformation Since Hogwarts
By Sam Ramsden and Meguire Hennes
How To Stream 'Thor: Love And Thunder'
By Arya Roshanian
Get Even More From Bustle — Sign Up For The Newsletter