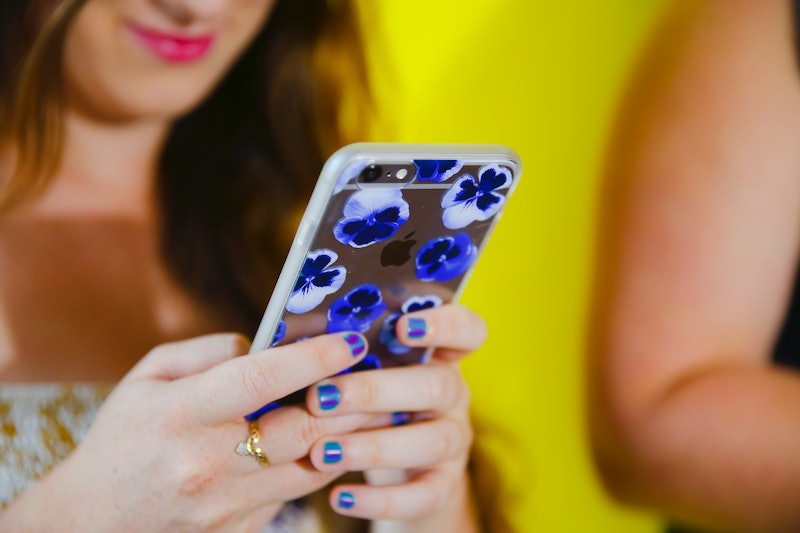 If you're not already aware, July 17 — aka the date on the little emoji calendar — is World Emoji Day. If you're an avid lover of emojis, you probably have a select few favorites that you use regularly (and annoy your friends in the process). It might sound silly, but our choice of emojis actually says a lot about our personalities. I don't know anyone who's a major jerk in real life and also likes to use the hugging emoji — it just doesn't make sense. So, naturally, you might wonder: do emojis impact our love lives, too?

Perhaps unsurprisingly, the answer is yes. Match's annual Singles in America study — a survey of over 5,000 people based on the U.S. census, not Match members — asked single folks about their emoji-using habits, among other things. They found that, overall, people who love and frequently use emojis are actually more likely to have a successful romantic life: They go on more dates, have more sex, and are even more likely to get married.

Since dating and technology have become so intertwined thanks to the popularity of dating apps, it makes sense that how we interact and flirt with one another has changed, and that emojis are a huge part of that. Whether you prefer to keep your flirting strictly verbal or like to amp up your convos with emojis, there's no point denying that they've overtaken our texting interactions.

Here are five things to know about people who use (or overuse...) the cute little additions to traditional texting. Even if you aren't a fan, don't be discouraged — there's no reason you can't have a perfectly happy love life sans-emojis.

According to the study, 52 percent of emoji-using singles went on at least one first date in the last year, compared to 27 percent of singles who never use them. To be fair, people who use emojis might also be more prone to having one or more dating apps, which could increase the likelihood that they're actively seeking out dates. Nonetheless, it's worth a shot to throw in a couple more emojis, eh?

Of those surveyed, 54 percent of emoji-using singles had sex in the last year, compared to only 31 percent of singles who never use emojis. Maybe they made it a point to incorporate emojis into their sexting?

3. Emoji Users Are More Likely To Get Married

This is actually pretty surprising: Regular emoji users are twice as likely as non-users to want to get married. 62 percent of singles who regularly use emojis with a date want to get married, compared to only 30 percent of singles who never use emojis. Granted, marriage isn't for everyone, but it's crazy that there's even a small correlation between emoji use and a desire to wed.

4. Men And Women Flirt With The Same Emojis

Regardless of your gender, the most popular emojis used for flirting were: wink (duh), blushing smiley, and kissy face. Unless you have some super specific inside joke with the person you're flirting with, those are pretty much the most universally flirty emojis I can imagine (aside from the eggplant, hehe).

And now to the root of why we're all so darn obsessed with emojis: 51 percent of singles say they use emojis to give their texts ‘more personality’ and 37 percent say that emojis make it ‘easier to express their feelings.’

Although it's difficult to say that emojis will definitely improve your love life, it makes sense that you might have more romantic success if you showcase your personality boldly to those you're interested in — and emojis can definitely help with that.