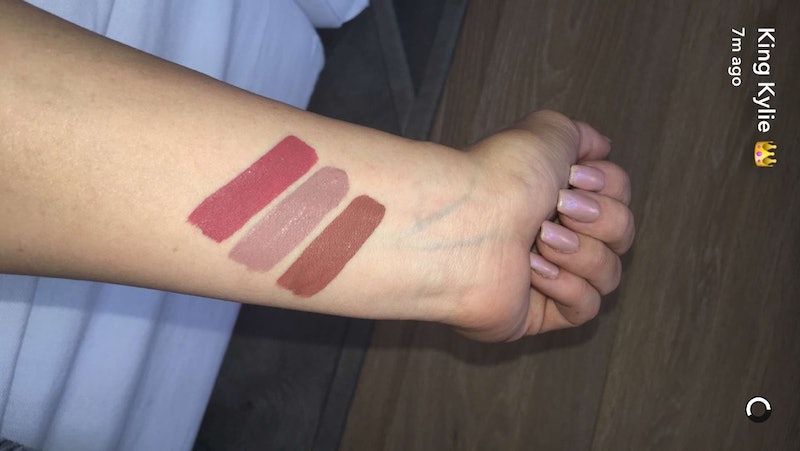 On Friday, Kylie Jenner yet again gave fans everything they hoped and dreamed for. The Kylie Cosmetics mogul not only released the latest shades of her Kylie glosses for sale, but she also gave followers a sneak peek of the Kylie summer Lip Kits. These swatches of Kylie's summer Lip Kits will get you so excited for her new colors Kristen, Maliboo, and Ginger. Leave it to Jenner to further expand an already impressive line of lippies, but if anyone could do it, the makeup-loving teen can.

Jenner's lip kits have been the talk of the Internet for some time now, and it hasn't always been on the up and up. Only last week, Jenner's business was given an F rating from the Better Business Bureau, but being the graceful entrepreneur she is, Jenner got the rating dropped until more customers can be reached. Not every Kylie Cosmetics headline has been negative, though. Jenner has been heavily advertising the launch of her new glosses via social media, and it has beauty junkies scrambling to get their hands on them.

Now that the Kylie Cosmetics summer lip kits have been revealed, it's time to get excited about rocking the cool, new shades before the end of the season. Although, let's be honest, these stunning hues are going to be good even past the steamy weather of summertime, and that's probably exactly what Jenner wanted.

Without further ado, let's drool over the swatches together, shall we?

Jenner is describing this as a strawberry matte.

This color is 100 percent necessary for summer. I needed this yesterday.

It's such a Kylie Jenner pinky nude.

Ginger looks a lot like 22, but it's got more hints of brown and mauve.

Of course she has been! So sneaky, that Kylie Jenner.

Here's a photo of them all together!