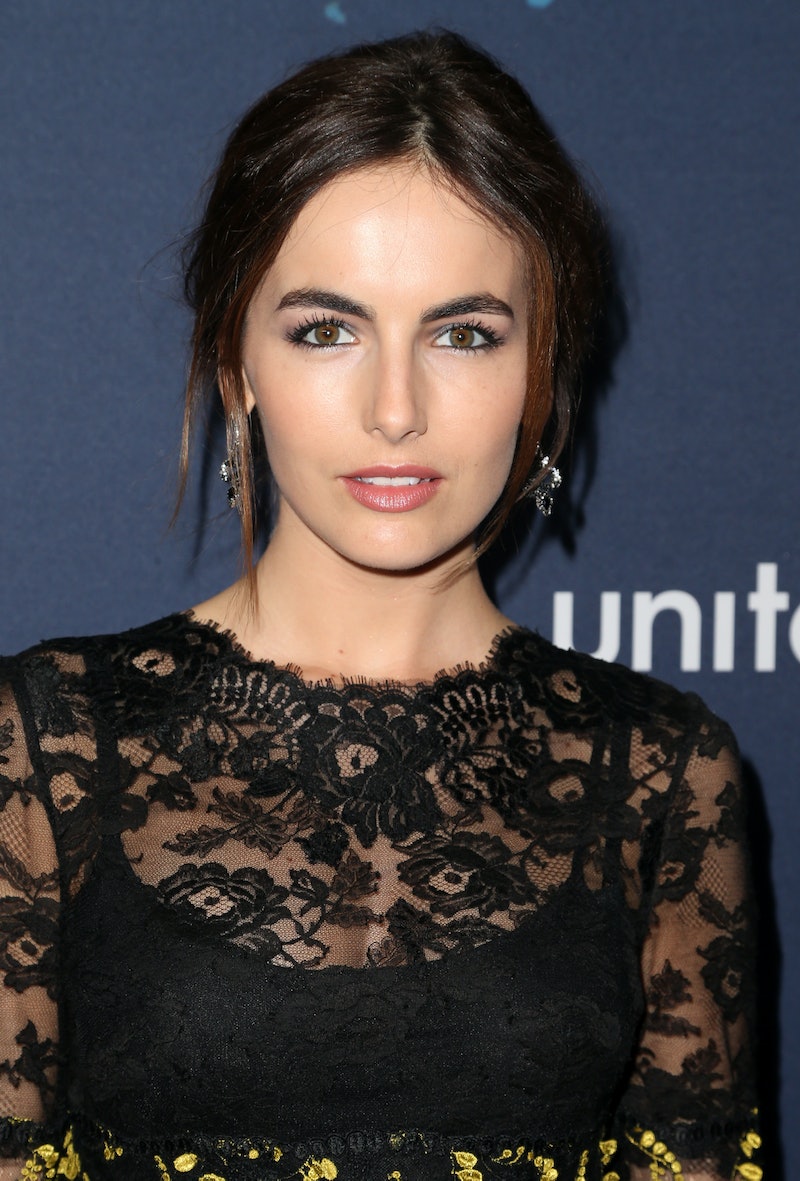 Ever since Keeping Up With the Kardashians star Kim Kardashian exposed Taylor Swift and Kanye West's phone call about "Famous" via Snapchat Sunday, many celebs have taken to Twitter to express their thoughts. For example, a lot went down between Khloé Kardashian and Chloë Grace Moretz that will make your jaw drop and disgust you all at once. And another celeb is also seemingly commenting on the Kimye and T. Swift events. Based on a tweet from Monday, it appears Camilla Belle slammed Swift. Whoa. If you need a refresher, Bell and Swift have a history and it has a lot to do with Joe Jonas.

Before I get to all those juicy details, let's discuss Belle's tweet. She shared a quote that sure seems directed at Swift. The When a Stranger Calls star also captioned it, "#quoteoftheday" and "#HappyMonday." Now, for the quote, which reads as follows:

No need for revenge. Just sit back & wait. Those who hurt you will eventually screw up themselves & if you're lucky, God will let you watch.

Obviously, the 29-year-old actor could've posted this for various reasons. However, when you discover that Belle and Swift have quite the history, well, it seems more plausible that the quote is directed at the 1989 artist.

Their history goes all the way back to 2008, when Swift and Jonas broke up. While appearing on The Ellen DeGeneres Show in November 2008, Swift told host Ellen DeGeneres about the former Jonas Brothers member breaking up with her over the phone. "You know what, it’s like, when I find that person that is right for me, he’ll be wonderful. When I look at that person, I’m not even going to remember the boy who broke up with me over the phone in 27 seconds when I was 18."

In a November 2008 letter written by Jonas on his MySpace (via People) he commented on their split and said, "For those who have expressed concern over the '27 second' phone call, I called to discuss feelings with the other person." He then added, "Those feelings were obviously not well received. I did not end the conversation. Someone else did. Phone calls can only last as long as the person on the other end of the line is willing to talk."

Clearly, all is good between the two now, because she and former boyfriend Calvin Harris went on a double date with Jonas and Gigi Hadid in June 2015. The same can't be said for Belle and Swift.

After Jonas and Swift's headline-making split, it was reported that same November the current DNCE singer started dating Belle, who also starred in JoBros' "Love bug" music video. Jonas was quick to address that he did not cheat on Swift. As he wrote in his MySpace letter, "Several things I will state with all my heart. I never cheated on a girlfriend. It might make someone feel better to assume or imply I have been unfaithful but it is simply not true."

Of course, his new relationship at the time did not make the "Bad Blood" artist happy. In a 2008 interview with Us Weekly at the CMA Awards, Swift said (via MTV News) about Belle and Jonas, "They've been together since we broke up. That's why we broke up — because he met her." In June 2009, Belle's rep confirmed to People that she and Jonas broke up.

However, Belle and Jonas' romance didn't end quietly, because Swift reportedly wrote a song about Belle in 2010 titled, "Better Than Revenge." Part of the song goes:

Yeah, that happened. In August 2014, Swift spoke about the song with The Guardian and said, "I was 18 when I wrote that. That’s the age you are when you think someone can actually take your boyfriend. Then you grow up and realize no one can take someone from you if they don’t want to leave."

Belle certainly hasn't forgotten it, because she got in on the action in 2015 when Nicki Minaj and Swift feuded over the MTV's VMA nominations for Video of the Year. Belle inserted herself into it all by responding to Swift's other so-called enemy Katy Perry, who gave her opinion about the situation on Twitter. Their exchange went as follows:

And now in 2016, Belle appears to still have an issue with Swift. If you notice, the quote she shared mentions "no need for revenge," which just may be a jab at T. Swift's song supposedly written about her.

Whatever the case, their history doesn't seem to be disappearing anytime soon.