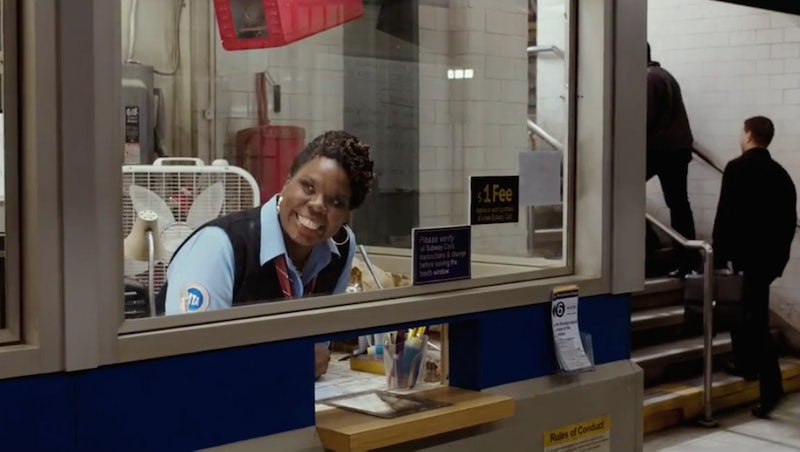 The Ghostbusters movie has been the subject of a lot of controversy, most of it coming from sexist fans of the original trilogy who can't stand to see their childhood "destroyed" by introducing women to the franchise. However, another aspect of the controversy surrounded the perceived racism of Leslie Jones' Ghostbusters character being the only member of the team who isn't a scientist or a specialist in her field. While Jillian Holtzmann (Kate McKinnon), Abby Yates (Melissa McCarthy), and Erin Gilbert (Kristen Wiig) have prestigious titles like nuclear engineer, paranormal researcher, and particle physicist — all PhD-wielding titles that make them well-suited to the occupation of ghost catching. Patty Tolan is an MTA worker whose relationship with the paranormal is only incidental. At least, that's the way the trailers made it seem. The release of the movie made it clear, however, that not only is Patty Tolan not an incidental member of the group, but that the women's first adventure wouldn't have gone near as well without her.

When the controversy first broke out, a previously-done Empire interview with Paul Feig began circulating once more, in which the director revealed that Patty's role was originally written for Melissa McCarthy (Abby Yates). "We had written the role with Melissa in mind, but then I thought I’ve seen Melissa play a brash, larger-than-life character. She’s done it in my movies before!” he said. "...I wanted to unleash Leslie on the public in the same way we unleashed Melissa on the public in Bridesmaids, with a very showy role.” Jones herself responded directly to the controversy with a statement which seemed to miss the mark of people's complaints entirely, attacking what was perceived as a slight against MTA workers:

With such a charged atmosphere — and this particular criticism being one that I personally agreed with — I was nervous to watch the film. And, as it turns out, I shouldn't have been. For one thing, Feig's description of Abby Yates as a "Paranormal Researcher, Supernatural Scientist, Entity Trapper" made her sound far more distinguished than her character actually was. When the audience meets her, she lives in what appears to be a science lab in a crappy community college or vocational school with a laughable reputation, a science lab that she is immediately kicked out of when the principal realizes that she and Jillian Holtzmann are even still there.

Working alongside Abby to prove the existence of ghosts is Holtzmann, played to flirtatious and bizarre effect by McKinnon. Holtzmann her credentials as a mad scientist who leans on both the mad and the scientist pretty equally during the film, if not more mad than scientist sometimes. As such, Wiig's Erin Gilbert is the only member of the Ghostbusters who is taken even halfway in a serious academic field, and even that's because she renounced the whole supernatural thing years ago. Then enters Patty Tonlan, who turns out to be the only one besides Erin who actually has a real job and, you know, isn't a joke or a womanchild like Abby and Holtzmann.

From the onset I, for one, was feeling like a real heel for doubting Ghostbusters at all. But Patty's qualification for the job doesn't end there. Although I still find it ridiculous for her area of expertise to be "[knowing] New York" (we live in a Google and iPhone generation, after all), Patty brings way more to the table than a search engine (or, considering she provides the team's ride, an Uber) could. She is every inch the "Ghost Tracker, Municipal Historian, Metaphysical Commando" that Feig described her as, taking down multiple ghosts in every fight despite being a complete newcomer to the supernatural world. On top of that, she saves her teammates multiple times, rarely, if ever, needing to be the one rescued.

One memorable part of the film involves Abby being possessed by the bad guy and throwing Holtzmann out the window. Patty not only holds Holtzmann up to keep her from falling to her death, but she does so while fighting Abby off. In fact, once she gets Holtzmann back inside — which she does while still fighting Abby, mind you — it is she who slaps the ghost right out of her friend. Without Patty there, Holtzmann would be a goner and Abby would have been leading a dancing squad team at the climax of the film instead of Chris Hemsworth. (Which, considering that she plays a huge role in helping to take down the villain once she gets over her possession, would have resulted in a pretty bleak ending of the film.)

Ultimately, it was poor wording that was Patty's undoing before the movie actually hit theaters. She might have been portrayed as less qualified than her white counterparts, which in turn made her seem lesser than them when it came to her role in the film and on the team. But Patty Tolan turned out to be the most important character in the movie. At times, she was even the most capable, and she was certainly the one who did more rescuing of her friends (especially Holtzmann) than she did needing to be rescued. It was an intense relief to see her character written with such care, and she truly proved herself a hero worth looking up to for people of color.

She won't qualify for breakout character of the film — that crown unquestionably belongs to Jillian Holtzmann — but she's not the racist caricature that I feared she was being painted as during the Ghostbusters trailer. And, hopefully, Sony will turn the film into a franchise so that both Patty and the new generation of Ghostbusters have even more chances to win over their detractors and naysayers. They're really missing out on a great character and a great film.