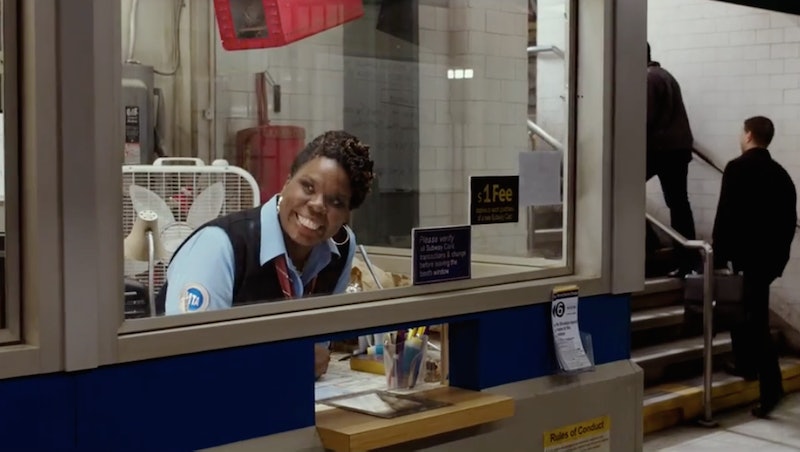 At long last, the highly anticipated first trailer for the 2016 Ghostbusters movie debuted on Thursday, and it was absolutely glorious. Despite complaints from diehard (read: sexist) fans that the reboot of the beloved film franchise would be terrible, due largely to the fact that it will feature an all-female ghost fighting team, the trailer proved that Kate McKinnon, Leslie Jones, Kristen Wiig, and Melissa McCarthy are comedy giants for a reason. However, despite its awesomeness, there was one specific aspect that stuck out to me: Leslie Jones is not a scientist in Ghostbusters in the trailer, unlike everyone else on the team. Instead, her character Patty Tolan, again, from the looks of the trailer, appears to work for the MTA and becomes embroiled with the world of the Ghostbusters due to her street smarts and access to a hearse. And that's problematic.

In the trailer, McCarthy plays paranormal researcher Abby Yates, Wiig plays particle physicist Erin Gilbert, and McKinnon plays nuclear engineer Jillian Holtzmann. The three of them appear to be Ghostbusters proper until the scope and scale of the latest paranormal problem draws Jones' Patty Tolan into the fold, largely because she shoves her way in. As she states in the trailer, "You guys are really smart about this science stuff, but I know New York. And I can borrow a car from my uncle." From there on, the trailer cuts straight to the gags and the action, so it doesn't give us enough of a look into the dynamics of the team to know just yet if Patty was solely brought into the organization on that basis. Bustle has reached out to Sony Pictures and Leslie Jones for comment, but have yet to receive a response.

It's too early to tell if Patty's representation in the trailer is how she's portrayed throughout the entire movie, and I'm optimistic that expanding these two and a half minutes of footage into a full film will give us something different, something better. However, the little that the trailer does show doesn't paint Patty in the same prestigious light as her teammates — although, to be fair, that's nothing new for the franchise.

In the original Ghostbusters film, the character of Winston Zeddemore, played by Ernie Hudson, also occupied the role of the everyman on the team. Peter Venkman (Bill Murray), Ray Stantz (Dan Aykroyd), and Egon Spengler (Harold Ramis) were all part of the original ghost-fighting squad, and were the only ones credited as such in the 1984 trailer. Winston entered later in the storyline after responding to a want ad they posted, declaring that, "If there's a steady paycheck in it, I'll believe anything you say."

In the original film, Venkman was a doctor of parapsychology and psychology, Stantz was the go-to person for all things paranormal history and metallurgy, and science nerd Spengler was the king of paranormal and quantum studies. Zeddemore, well, he was the voice of reason, more than capable of holding his own, but with no prestigious doctorate to brag about. (Though it's worth noting that, in the 2016 trailer, they mention that "four scientists" once saved New York City, suggesting he has, perhaps, been upgraded, or holds the doctorate in this universe that he referenced in the backstory of Ghostbusters: The Video Game.)

It's clear that Patty Tolan is meant to be a spiritual successor to Winston Zeddemore, an ordinary person through which the audience can find the world of the Ghostbusters more accessible. However, the fact that the only woman of color on the Ghostbusters team is also the only member of the team who isn't a scientist or any sort of expert in this field is particularly grating to modern audiences, likely more so than it was in the '80s. The calls for diversity and inclusion in television have been ongoing and frequent in recent years, with thinkpieces being written on the lack of well-written characters of color in movies, broadcast TV, and online shows every day. The #OscarsSoWhite controversy has blown up for the second year in a row, and the outcry has even forced the Academy to undergo some reforms.

Into this charged atmosphere comes the 2016 Ghostbusters trailer, perpetuating the trope from the former film that the sole person of color in the main cast is also the least knowledgeable of the group. Is it any wonder fans are angry?

Potentially carrying on this tradition becomes even more egregious when you consider the fact that, upon the reveal of the character posters, Patty was noted to be a "ghost tracker, municipal historian, metaphysical commando," a description that made her sound very much in the same prestigious league as the likes of a "nuclear engineer, munitions expert, proton wrangler," a "paranormal researcher, supernatural scientist, entity trapper," and a "particle physicist, academic firebrand, spectral warrior." The final nail in the coffin comes when you realize that, according to Ernie Hudson in an 2015 interview with Entertainment Weekly, Winston Zeddemore's original role in the Ghostbusters film was meant to be far more extensive: "When I originally got the script, the character of Winston was amazing... The character came in right at the very beginning of the movie and had an elaborate background: he was an Air Force major something, a demolitions guy."

Popular fan rumor even states he was meant to hold "multiple doctorates" and be the "smartest and most capable" of the Ghostbusters, though there is no corresponding interview to back that up. So why would a film that is meant to be a reboot, which has endless opportunity to update, change, and expand on things that were left out of the original films, keep the everyman role as the person of color? The trailer shows us a missed opportunity to give us a spiritual successor to Winston who, in this modern age, would be able to be everything that the original Winston never was. The MTA worker and late interloper that Jones appears to play for the Ghostbusters in the trailer is a role that could have easily been filled by any one of the three white actresses; the fact that it is instead a role occupied by the sole woman of color stands out, and not in a good way.

Patty Tolan wasn't given a chance to be more in this first trailer, to be seen as equal in expertise and intelligence to her white counterparts on the team, and that hurts an otherwise amazing look at a sure to be amazing film. Hopefully, the movie will turn our assumptions based on this trailer on their head when we're given more than two minutes of footage to work with. I can't wait to see that ghost tracker, municipal historian, and metaphysical commando that I was promised in Patty Tolan.