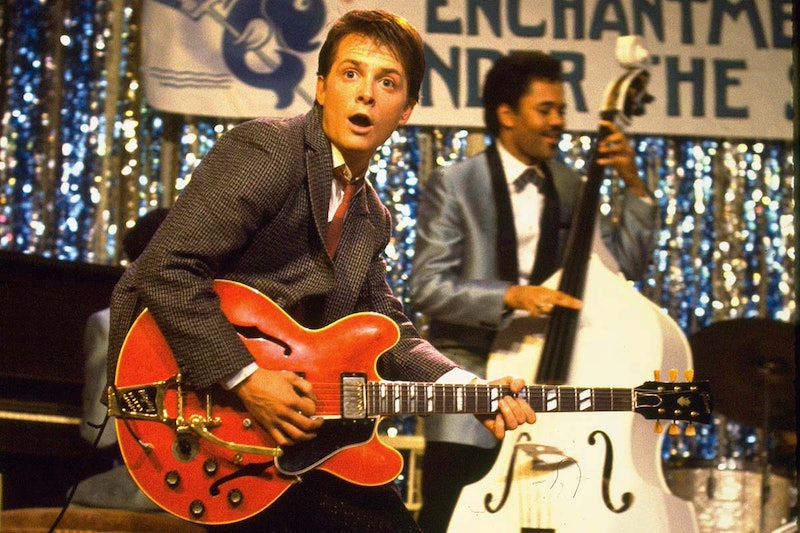 It might be a little early for a Flashback Friday, but that hasn’t stopped Michael J. Fox from bringing us all right back to the best decade ever. Over the weekend, Michael J. Fox relived the infamous Back to the Future scene in which his character performs at the high school dance, and watching this video of it brings back all the ‘80s feels. Whether you were alive at the time that the movie first came out or just grew up watching this classic on repeat, seeing Michael J. Fox step out on the stage some thirty years later to recreate his amazing performance will bring you right back to this moment in cinematic history.

What’s not to love about this combination: Michael J. Fox, Chris Martin, Coldplay, and the ‘80s. The moment happened when a video of Chris Martin’s son, Moses, popped up on the stage while Coldplay performed over the weekend. In the video, Moses Martin requested that Coldplay play a song from his favorite movie, Back to the Future. Ever the doting father, Martin obliged, joined just minutes later by Michael J. Fox.

It was an incredible moment, watching Michael J. Fox, who was diagnosed with Parkinson’s disease in 1991, not only step out on to the stage but totally tear it up, bringing us all right back to the moment when he shredded in front of a bunch of teenagers who weren’t sure what time he had come from.

The actor plays the guitar as the other members of Coldplay get into it. He leans in and jams with the other guitarist and then even comes forward to perform beside Martin. He’s missing his telltale tweed jacket and his serious shredding skills at the end, but it’s still just as good. Seeing Michael J. Fox on that stage bringing one of the best moments from the movie back to life will make you remember all there was to love about the original film.

Because 30 years may have passed, but Michael J. Fox clearly still has it.