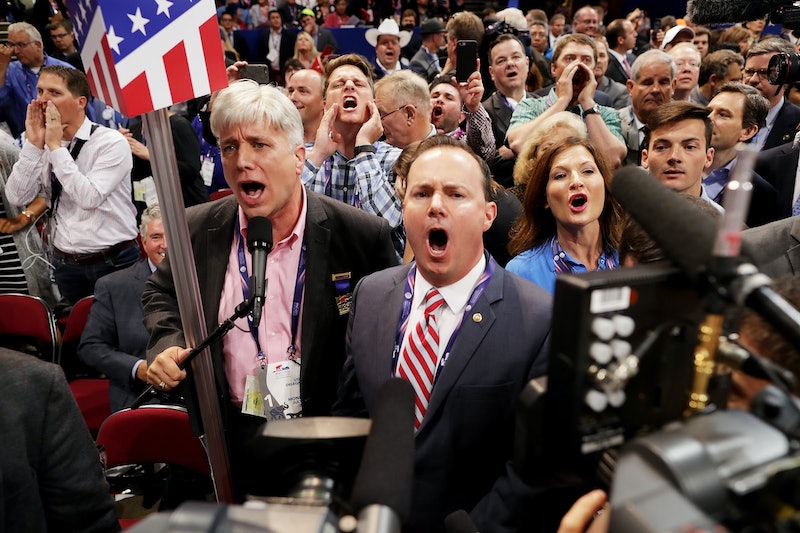 During the Republican National Convention Monday, Donald Trump's big day quickly turned into chaos as the convention rules were approved by voice vote, rather than a roll call vote. Some "Never Trump" advocates had hoped for the latter. Reportedly, the rules committee rejected the roll call request, which would have allowed delegates to vote individually either for or against the convention rules. The Never Trump delegates were hoping for a roll call vote to change the rules around bound delegates in order to have the opportunity to express their individual opinions about Trump as their party's nominee. Chaos quickly ensued on the convention floor, as delegates chanted "Roll call vote!"

Some delegates wanted the option for a conscience vote in order to unbind themselves from Trump, giving the Never Trump camp their final shot at overthrowing the presumptive nominee. That the convention floor erupted into outrage and chaos on its first day somehow ironically spoke to the convention's themes of "Make America Safe Again," and "law and order."

"It is unacceptable to me, and it should be unacceptable to you, that anyone who signed that pledge is not now adhering to that pledge and supporting our party’s nominee," New Jersey Gov. Chris Christie told reporters about the delegates' hopes of challenging Trump as the nominee.

Some of the delegates attending the convention — including the entirety of Colorado's delegation — walked out in protest in the chaos which ensued, while others remained on the floor demanding a roll call vote. RNC chairman Reince Priebus walked off the stage, leaving the protests to unravel as Utah Sen. Mike Lee and former Virginia Attorney General Ken Cuccinelli led the anti-Trump revolt.

"They want a roll call vote, and apparently the leadership just steamrolled right through the fact that the whole place was calling for a roll call vote," Ted Cruz's state director and Colorado delegate Regina Thomson told CNN. Delegates wanted to unbind from their state's vote in order to support the candidate of their choice, rather than being forced to stand behind the former reality TV star.

Trump events have been known to cause a stir with anti-Trump demonstrators. The RNC was prepared for protests outside of the convention, but who knew the actions would get so heated on the convention floor, within the Republican party itself? If the rest of the week follows in a similar manner, it's certainly going to be more interesting than anything anyone was already expecting.

More like this
How To Fight For Reproductive Rights, Based On How Much Time You Have
By Courtney Young
5 Ways To Stand In Solidarity With Women In America From The UK
By Sophie McEvoy
The Families Of Grenfell Tower Are Still Waiting For Justice, Five Years On
By Bustle UK
How Getting An Abortion Has Changed From The ’60s Through Today
By Amanda Chatel
Get Even More From Bustle — Sign Up For The Newsletter