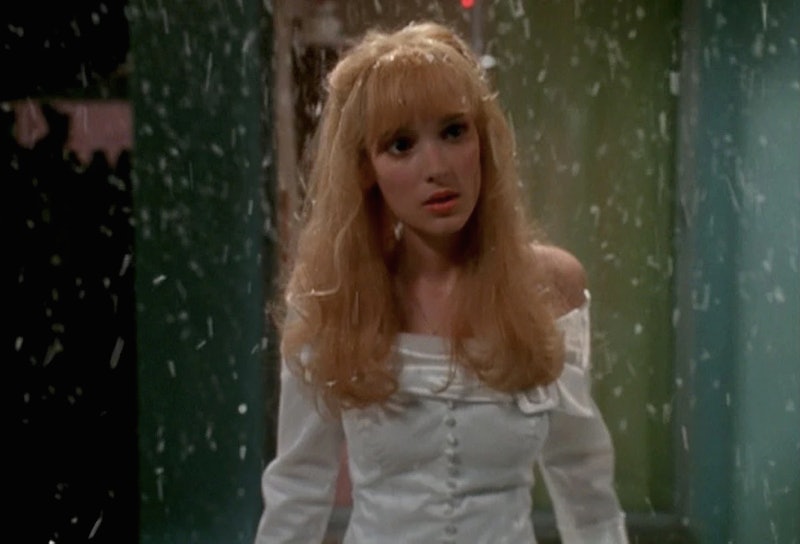 To me, Winona Ryder was always a style icon — something perfectly exemplified by Winona Ryder's best '90s outfits. After first seeing her in Tim Burton's Beetlejuice, I became obsessed with everything about the actor, from her ruffle skirts in '80s cult high-school-turned-horror film Heathers to her role alongside Angelina Jolie in Girl Interrupted and her absolute #RelationshipGoals with Johnny Depp in the earlier part of the decade. But more than all of that, it was her outfits worn both on and off screen that really cemented Ryder as one of my true style heroes. In decades since, the actor has become a bonafide icon — appearing in campaigns for Marc Jacobs and even getting busted for stealing from stores.

Run-ins with the law aside, my undying love for every single one of her looks was rekindled through her new supernatural TV show Stranger Things , which recently premiered on Netflix. But despite the fact that she’s still killing it in the sartorial game, my personal favorite Ryder era is still the '90s. Rarely photographed without a red lip, her style was always less polished and more subversive than other actors of the time, whether by rocking oversized suits and lunch-boxes on the red carpet or Old Hollywood-style hair on the cover of a magazine. Below are just 11 of her many iconic '90s moments.

1. As Kim In Edward Scissorhands

Rocking a blonde wig, Ryder's sickly-sweet good girl character Kim in the Tim Burton classic Edward Scissorhands epitomized the girl-next-door look. Preppy and perfect, my personal favorite look from the 1990 flick has left me jealous. I could never pull off wedding-dress-chic as effortlessly as Ryder did.

2. As Charlotte Flax In Mermaids

This particular look has me wishing I was a believer of religion, just so I could rock a crucifix, Peter Pan collar, and bouffant combo as well as Ryder did in the 1990s hit Mermaids. Starring alongside Cher and Christina Ricci, the three made up what arguably remains one of the most fashion-forward families of all time — with Cher pulling off an actual mermaid tale at one point in the film.

Mom jeans might seem like an obvious fashion choice in 2016, but no one in the '90s did them better justice than Ryder.

Rarely seen in anything other than black, this deep purple tulle paired with Ryder's cute pixie crop showed a softer side to the actor's style.

An oversized, baggy suit would normally be an outfit conjured straight from my worst fashion nightmares. But here — if nothing else — is proof that Ryder could make ill-fitting androgyny work just as well as red carpet dresses and femme fashion.

Serving pure Old Hollywood meets The Great Gatsby vibes with a healthy sprinkling of goth, Ryder showcased the power of a strong nude lip long before Kylie Jenner was even born.

One of the most loved couple of the '90s, Depp and Ryder served many, many great looks throughout the duration of their relationship in the first half of the decade. You can see one of my personal favorites above, in which the duo appears to have stepped straight out of a Tim Burton (a close collaborator to both Ryder and Depp) film set.

Designer dresses may be the norm when it comes to red carpet dressing, but Ryder's never been one to follow the rules. Opting for a ribbed high neck in place of a big name brand, this look only cemented her status as a weird-girl icon.

9. As Corky In Night On Earth

Ryder has been known for her androgynous-leaning style long before "gender neutral" became a buzzword utilized by large companies. But here, somehow, she managed to make being a taxi driver with greaser hair, a backwards cap, and Aviator-like shades look effortlessly amazing. If our Uber drivers were this cool, we probably wouldn't even mind those additional fees.

10. As Elisabeta In Bram Stoker's Dracula

Full-on Victorian dress is by no means the most wearable of Ryder's many guises, but I'm seriously envious of her luscious long curls. Not to mention the uncountable number of take-your-breath-away (in both senses of the word) corsets seen throughout the film.

Seemingly channeling her Beetlejuice persona, Ryder slayed in a pixie and killer LBD that Lydia Deetz would have totally approved of.

Are you convinced yet? Winona Ryder was always advanced in the game of style. And the '90s were her golden age.