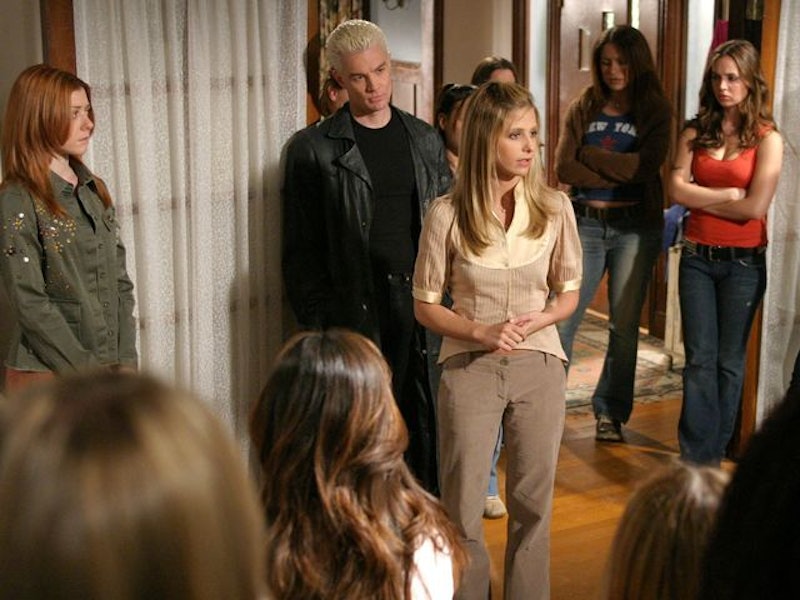 It is a known and scientific fact that Buffy the Vampire Slayer is the best show that's ever aired on television. From the character development to the always-entertaining dialogue to the straight-up terrifying Big Bads, Buffy rocked, and it deserves the crown upon its hyperbolic head. If I'm feeling down, or like this world is just too tough of a place to be as a young woman, watching The Slayer and her Scooby gang face the world with bravery and badassery is the best remedy. Of course, as any Buffy fan knows, the series had a nice long run — seven seasons of awesome aired between two networks, The WB and UPN, from 1997 to 2003. It's tough for any fan to pick a favorite of them all because they're all so good — but, we all have our favs, and the cold-hard truth is that Season 7 of Buffy the Vampire Slayer is the best.

"Season 7?" I imagine you crying out. "Uh, pretty sure that's the last season and therefore just a tragic ending to something we once loved so dearly." Yes, it is an ending season. But! That does not mean it can't be the best season too. Earlier Buffy seasons — for instance, when the gang was in high school and just starting college — are really fun: There's a little bit of seriousness thrown into the mix, with some horror and stuff, but also some great jokes. Then, Season 5 rolled around and sh*t got real with a sick Joyce and a new sister Dawn — things continued to get realer after that. Season 7 finally took all that realness, and knew what to do with it.

Still not convinced? The following are the reasons Season 7 wins the day.

Buffy's always had a huge responsibility. Like, one Slayer for the entire world? How does that even make sense?. But in Season 7, she is also suddenly forced to turn into, like, General Buffy, and lead the Potentials who are being picked off one by one by The First. Watching her deal with that power and responsibility (sometimes unsuccessfully) is so impressive.

2. The Talent Of The Scoobies

By Season 7, all of the Scoobies have figured out how they can help the group — Buffy leads, Willow magicks, Spike fights, Anya has useful information about demonology, Xander cleans up afterwards, and Dawn helps out where possible. It's awesome watching this powerhouse team take on the world.

3. The Big Bad Is The Ultimate Scariest

A first evil who has the ability to take forms of anyone dead or alive and make vampires go crazy is scary enough. But, add a twisted preacher who really hates women (played flawlessly by Firefly's Nathan Fillion) and some minions without eyes (aka The Bringers), and you've got an awfully scary supreme evil.

4. The Pep Talks Are The Best

As an unofficial general, Buffy has to constantly keep her unprepared troops passionate about the cause... or they could die. If the pep talks Buffy comes up with don't inspire you to get up and finally take the trash out, nothing will.

Can one character make a whole season better? Yes. Yes he can, and he did. Andrew's comic relief and occasional soulful realizations (like in Episode 16, "Storyteller," when he tearfully admits he murdered his best friend) brings fresh life that this season desperately needed. And the way he says "vampire" is really funny.

6. We Don't Have Any Lame Buffy Love Interests

Buffy might be a Slayer, but her taste in men is incredibly lacking. (I mean, Riley? Come on, Buff. He was blander than plain oatmeal. NOTHING IS BLANDER THAN PLAIN OATMEAL, BUT HE MANAGED IT.) Sure, Spike and Angel show up to help fight the good fight, but they are mostly in the show as warriors, not distractions. Even though Spike still totally loves Buffy and even got a soul for her, she and him keep their distance for the most part. This makes the moments they do share, like simply holding each other the night before the big battle, all the more touching.

This season is all about girls from all over the world finding their inner goddess (or, in this case, Slayer) and kicking the tushies of their wannabe oppressors. It is literally young women fighting for their power and right to life, and every time I watch all the potentials get Slayer strength, my heart grows about seven sizes.

The large amount of silly teen girls who, just like Buffy did in the late '90s, stumbled into this new life as a potential Slayer, are so fun. The slumber party vibe that takes over Buffy's house is a beautiful thing to see and it really has no equal in any of the other seasons.

9. The Stakes Were Raised

While it's true Season 5 and Season 6 definitely proved no one was safe thanks to the deaths of core characters Joyce Summers and Tara Maclay, respectively, Season 7 really drove that point home. Over the course of the 7 seasons, nothing terrible that has happened to our core group was something that couldn't be reversed (see: Buffy getting brought back to life, Willow going to magick therapy). That is, until Xander loses his eye. And then, Anya dies. Suddenly, the stakes of the show were way more real.

Since we pretty much knew from the get-go that this was the last season of the greatest show of all time, watching it go down was pretty magical.

I loved Tara and Willow together, don't get me wrong, But, the romance between Willow and Kennedy in Season 7 felt much more mature for Wills, and it was compelling to watch.

Like Andrew makes the season all the better, so does Episode 7 of Season 7, "Conversations With Dead People." This episode gives us closure for all the losses we've experienced as viewers: Tara, all those students Buffy was never able to save, Joyce, etc. It's a great episode for a last season.

Since Buffy is, as I mentioned above, the greatest show of all time, it should come as no surprise that every single one of the seasons is wonderful and amazing. But, I hope I have convinced you that Season 7 is the greatest season of this fantastic show. Which, I guess means it is the best season of all television ever. Congrats, Scoobies. We couldn't have done it without you!