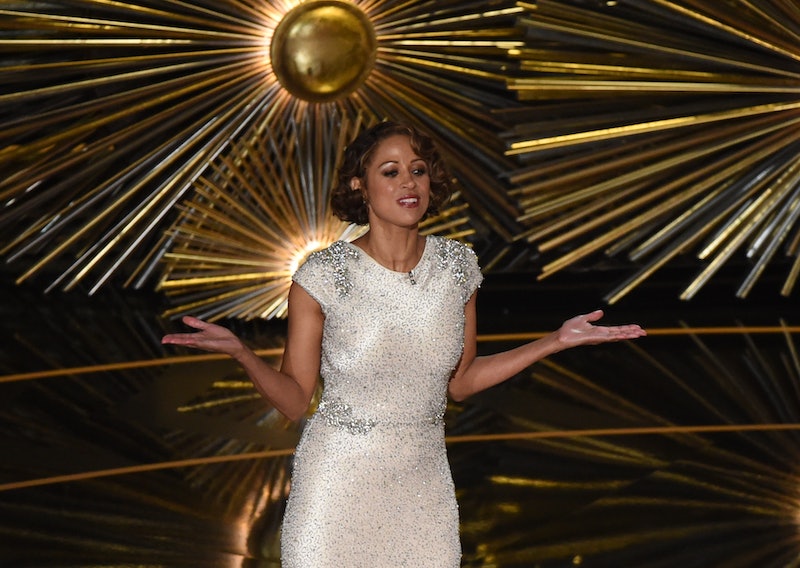 A couple of months ago, Stacey Dash endorsed Donald Trump for president, and went on to contribute to the pro-Trump Great America PAC. Consequently, the Clueless actress was slotted to speak on the first day of the Republican National Convention in Cleveland — but that doesn't seem to have happened. So is Stacey Dash at the RNC this year, or not?

The convention schedule lists Dash as a speaker for Monday, July 18, but she doesn't seem to have delivered a speech. Dash was also supposed to be at a Women Vote Trump event in Cleveland, Ohio, but was not able to attend. The Women Vote Trump event only attracted about 30 people, according to Jezebel, some of whom were journalists. It appears, then, that Dash did not make it to the RNC after all.

Her bio in the convention program highlights the fact that Dash was once a Democrat who supported Barack Obama, but then became "disillusioned with the impact of Obama's policies on the African-American community," adding, "She started Dash America with the aim of making it easier to be a conservative in Hollywood." Indeed, Dash has spoken out in the past about being unfairly treated because she is a conservative in Hollywood.

Dash became particularly vocal during this election period following her endorsement of the now-official GOP nominee, going so far as to say that Trump is "not violent, he's just 'street.'" (Such a statement clearly did not make being a well-known conservative any easier.) After it was announced that former The Apprentice winner Omarosa Manigault would be Trump's new chair of African American outreach, many people — including Samantha Bee — mockingly wondered whether it was because "Dash wasn't available."

Where is Dash, then? She didn't give her speech, she didn't show up for the Women Vote Trump event, and she's apparently not working on Trump's campaign. Some people have taken to Twitter to either speculate about why she hasn't been seen at the convention or poke fun at the fact that she was expected to be there in the first place.

Dash's official Facebook and Twitter pages also didn't give any indication as to why she was not at the RNC; she has not mentioned Trump or the convention in any of her recent posts. Whatever the reason, it's pretty clear at this point that Dash is not at the RNC in any official capacity.