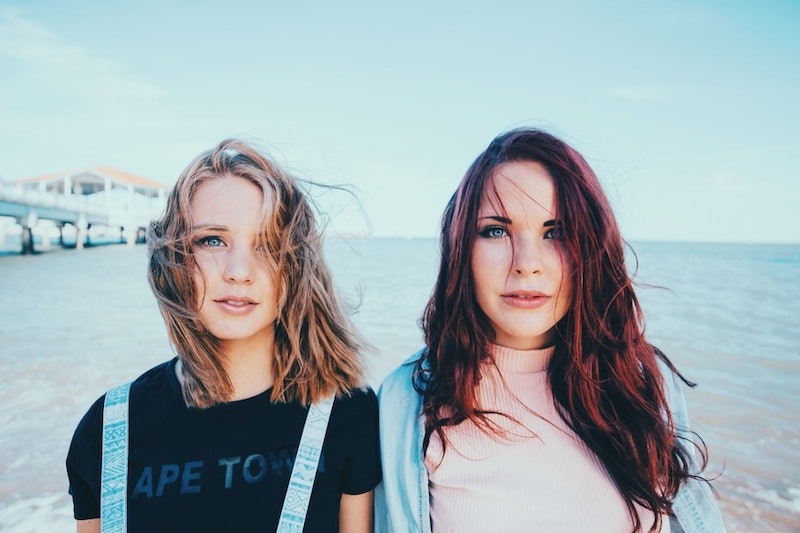 When it comes to judging the future of a relationship or friendship, it can help to know the signs someone doesn't like you. I know, you're probably asking yourself how something so negative might come in handy. But trust me, being able to pick up on these subtle and sometimes weird signals can not only save you a ton of time, but a ton of heartbreak as well.

Now, I'm not saying you should turn yourself into some kind of detective. Life would be pretty annoying if you were constantly reading body language and driving yourself bonkers with "Do they or don't they?"-type questions. But if you can practice the art of deciphering between those who are worth your time (i.e. the people you jive with) and those who are not, it can make life a helluva lot easier.

Take friendships, for example. When meeting new people, most of us put our best selves forward. We are all smiley and nice and welcoming, because we're grown adults and that's the right thing to do. It's also polite, and there's nothing wrong with that. But it does make things ridiculously confusing when it comes to figuring out if someone actually likes you. (Are these friends the real deal? Should you keep hanging out?) If you find yourself asking similar questions, then read on for weird ways to know if someone doesn't like you as much as you might think.

Check out The Definitive Book of Body Language , $20, Amazon

1. They Have Closed Body Language

Body language is super cool, in that it totally gives people's thoughts away — if you know where to look. Positive body language, which indicates someone is comfortable or happy, is very open — relaxed arms, good eye contact, genuine smiles, etc. Negative body language often looks the exact opposite, and could be a sign that someone doesn't like you. Look for someone with crossed arms who leans away, or hides behind something (like their bag). But be careful. "It's necessary to pay attention to multiple behavioral cues as a single one can be misleading," said Adam Dachis on Lifehacker.

Keep an eye out for fake versus real smiles, which are pretty easy to spot. "You use more face muscles when you have a genuine smile and you see that in the lines round the eyes of the subject, which crinkle up more," said psychologist Richard Wiseman in an interview with Robin McKie on The Guardian. A fake smile will look like a tense elementary school kid cheesing it up on picture day.

3. They Don't Mirror Your Body Language

When someone likes you, they will mirror your body language. For example, if you are kickin' back in a chair, they might do the same thing. "As adults, we do it when we are talking with someone we like, are interested in, or agree with," said Carol Kinsey Golman on Forbes. "We subconsciously switch our body posture to match that of the other person — mirroring that person’s nonverbal behavior and signaling that we are connected and engaged." Pretty cool, right?

Just like body language, eye contact is another big revealer of a true friend versus a total lame-o who's not worth your time. "There is more mutual eye contact between friends than others, and a looker's frank gaze is widely interpreted as positive regard," said Adrian Furnham, PhD on Psychology Today. "Lovers really do gaze more into each other’s eyes."

5. They Are Short With You

If a relationship is going somewhere good, then the person will be super excited to talk to you. You'll both chat freely about your days, your thoughts, your feelings. But if someone doesn't like you? Well, you may be met with some pretty stunted responses, according to Jacquelyn Smithosep on MSN. After telling a story about your weekend, all they say is "That's cool." When you ask them how their's was, they'll coolly say, "Fine." You get the idea.

6. They Don't Get All Touchy Feely

Whether you're on a date or simply out with a friend, you should take notice of how much physical contact goes on. That's because touching is used in a variety of ways: to communicate affiliation in courtship, symbolize commitment, initiate physical intimacy, or provide emotional comfort, according to an article on eHarmony. If nothing like that is going on, it could be a bad sign.

7. They Never Want To Make Plans

8. They Never Seem To Listen

A good friend will value your thoughts and opinions, and will give you the floor to speak. Someone who doesn't like you, however, probably won't be bothered with such niceties." As Kasandra Brabaw says on Prevention, "... she doesn't listen or give you time to speak, and that leads to one-sided conversations that leave you feeling unheard." Not cool.

9. He Or She Always Bails On You

If your plans occasionally fall through, no big deal. But if this person is constantly balling, or coming up with excuses for not being able to hang out, take it as a major hint. "Yeah, people get busy, but true friends manage to make time for each other at least once in a while — and if they have to bail, they try to make it up to you," Booth says.

When you're around people who truly like you, life will feel easy and breezy. But if your hangouts are particularly awkward, it could be a sign that the friendship isn't as strong as you thought, according to Booth.

When someone doesn't like you, it's sometimes possible to feel it in your gut, according to Smithosep. Maybe you get the sneaking suspicion that they kind of hoped you wouldn't show up to their party, or that they are faking being nice to you. Whatever it is, you should probably trust your instincts, and move on.

Because nobody has time for relationships that aren't worth it. If you suspect someone doesn't like you as much as you thought, don't lose sleep over it. Simply move on to some better, more interesting people who are more worthy of your time. Simple as that.

More like this
How To Politely Reject Someone Who Keeps Asking You Out
By Laken Howard and Lexi Inks
20 Women Reveal Exactly How Long It Took Them To Get Over Their Ex
By Amanda Chatel and Lexi Inks
10 Ways To Be More Empathetic To Your Partner
By Raven Ishak and Lexi Inks
Think Your Partner Is Cheating? These Tarot Cards May Confirm Your Suspicions
By Kristine Fellizar
Get Even More From Bustle — Sign Up For The Newsletter