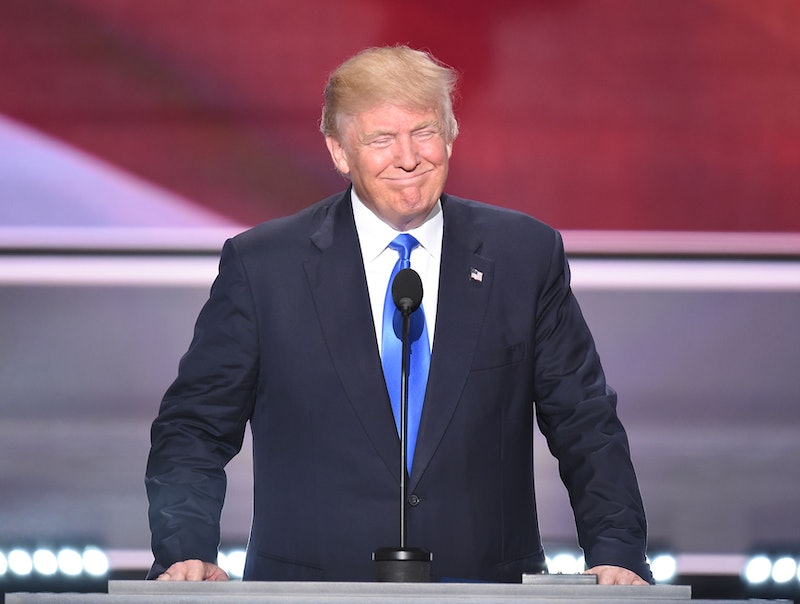 To be honest, there are lots of reasons to dislike Donald Trump — but I never would have known that being a Potterhead was one of them. According to an upcoming study revealed by Time, Harry Potter fans hate Donald Trump more than anyone, and it might just be because he reminds us of Voldemort. The study found that readers of the Harry Potter series, even when controlled for factors like age, gender, party affiliation, and education, were more likely to express their dislike for Trump than those who have not read the books.

Professor Diana Mutz suggested that this isn't just coincidence. In fact, she pointed out parallels between the tyrannical reign of the series' villain, Lord Voldemort, and Donald Trump — whose political style is equally aggressive and dominating. "If you have been exposed to these long series of books where he is the ultimate kind of incarnation of evil," Mutz told Time, "the characteristics that are more aggressive tactics and so forth that Trump represents are less attractive, even leaving aside how it affects your policy attitudes.”

Mutz also added that book series like Harry Potter may promote political messages more effectively than traditional political campaigns, since they're seen as entertainment. Readers have their defenses down, and are therefore more receptive to the books' central themes of tolerance over prejudice and good over evil.

Interestingly, those who had only viewed the eight Harry Potter movies didn't seem to be affected in the same way. Perhaps that's because the films are more condensed, and so audiences spend less time wrapped up in Harry's world — or perhaps it's just further proof of how powerful books really are.

Either way, the fact that Potterheads dislike Trump so much says something pretty conclusive about the would-be future president. If we're aiming for a world which treats people as equals, as J.K. Rowling would like us to, then there's just no room for Trump's ideology.