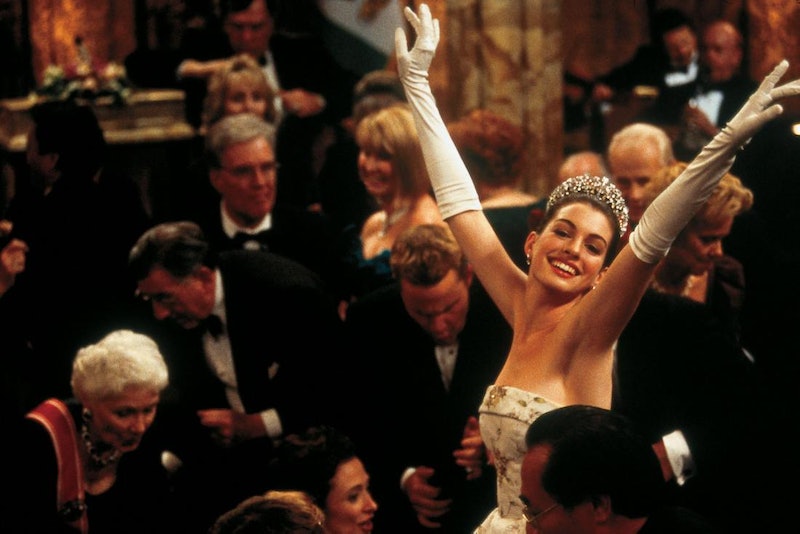 When I was in fifth grade, I was not exactly liked. I had friends, sure, but the true "popular" kids and I did not get along. I felt different, like who I was just didn't mesh with who everyone else was. I was outspoken and sarcastic and I had wildly frizzy hair, and I felt alone, like no one understood me. It didn't help when I watched TV and movies and saw that all the girls reflected back at me were skinny and blonde and so not who I was. But one movie changed that: The Princess Diaries. When that movie, directed by the late Garry Marshall, came out in 2001, I finally felt like someone saw me. Thanks to The Princess Diaries I felt less alone. Actually, I felt exactly like Mia Thermopolis.

OK, I wasn't a secret princess, I didn't live in San Francisco, and I didn't have a cat named Fat Louie. But I was Mia in the sense that I, too, felt alone and invisible. I felt like who I really was wasn't accepted by others, and even the friends I did have, I felt distant from, as if the things I liked and was interested in didn't interest them. Mia was just like me, though, and we even shared the same hairstyle: unruly curls that were more frizz than fantastic.

There are only two distinct characters from my childhood that I can really say "saved me," making my younger self feel so much less alone and that I was worth something, with my voice and ideas valued. One of them is Harry Potter, and the other is Mia. Mia knew who she was and embraced it; even when she felt invisible, she stayed true to herself. Even when she had a flirtation with popularity and saw herself start to change, she managed to recognize how unhappy not being herself made her. She realized that it was better to be alone but love who you are than to be pretending to be someone you're not all for the sake of being "cool." And that message, to this day, has stuck with me.

To some, The Princess Diaries might seem like just another kids movie, but to me, it's so much more. This movie matters, both to me and all the other people out there who feel invisible and misunderstood and who just want their voices to be heard. Sure, the film is a fantasy, and I doubt any of us are going to turn out to be secret royalty, but it gets the very real struggle of what it's like to feel unpopular and unwanted. It also shows how important it is to embrace change; Mia starts the movie preoccupied with herself and her invisibility, but by the end, she realizes that the problem with being invisible is that you start to shrink yourself because everyone else makes you think you should. But when you start to let your voice be heard, it doesn't only help you. When Mia rediscovers her voice, she realizes she can do some good in the world by helping other people like her, those who felt alone or invisible or lost, and so she uses her platform to stand up for others.

Maybe I can do some good with the platform that I've been given, too. I may not be a princess, but I'm an adult who understands how important using your voice and staying true to yourself is. It's not always easy, of course. Sometimes I forget that who I am is enough, and that if someone doesn't like me or want to be in my life, that's their problem and I shouldn't try to change myself or love myself any less. But watching The Princess Diaries, I'm reminded of this message. This movie matters to me in a way that not much else does, and I'm sure it matters to so many others in much the same way. I learned to embrace who I was because of this movie and that is something I wouldn't trade for anything. Remember: No one can make you feel inferior without your consent.

More like this
Keke Palmer Hopes 'Lightyear' Will Help “Normalise” Same-Sex Relationships
By Sam Ramsden
Everything To Know About 'My Big Fat Greek Wedding 3'
By Grace Wehniainen
Alicia Silverstone Has Recreated An Iconic 'Clueless' Scene
By Frances Stewart
Emma Thompson, Lashana Lynch, & Stephen Graham Lead Netflix’s 'Matilda'
By Sophie McEvoy
Get Even More From Bustle — Sign Up For The Newsletter