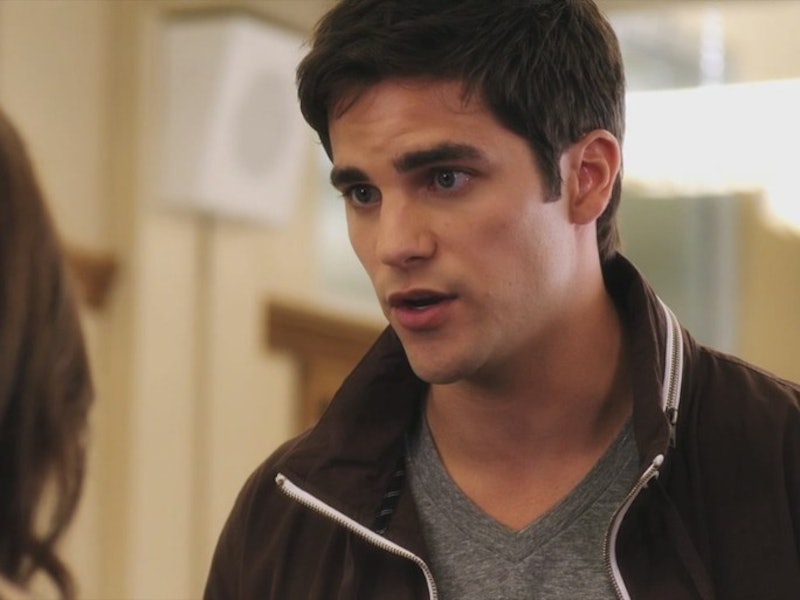 Tuesday night's episode of Pretty Little Liars may have featured a wedding proposal between Ezra and Aria, but it certainly wasn't the only pivotal moment of the evening. Noel Kahn returned to Pretty Little Liars at the very end of the episode, appearing in front of Jenna Marshall and Sara Harvey with a mischievous smirk on his face that tells us one thing's for sure: he's up to something, but what? While his motives for coming back to Rosewood still remain unclear, I'm becoming more and more confident that Noel Kahn is actually A.D. and was actually in the process of meeting his newest recruit.

Whatever Rollins/Archer was up to, clearly Jenna was already a part of it and helping him for reasons unknown. But as Charlotte proved during her reign as A, no tormentor worth their salt can pull off these extravagant schemes alone. They need help, sometimes from multiple minions. So it's possible Noel has been in league with Rollins and Jenna this entire time... or rather, perhaps more accurately, they've been in league with him. For all we know, Noel could actually be the brains behind this whole operation, thereby making him the mysterious A.D. that's been terrorizing the Liars with those emoji-filled texts.

For starters, let's look at the timing of his arrival to Rosewood. Shortly after finding Rollins' burner phone, Emily (pretending to be Rollins) sends a text to the mystery number on the other end and they arrange to meet up at their usual spot aka the evil fake doctor's burner apartment. But before anyone can show up, Toby barges in and ruins the trap so we still don't know who Rollins has been communicating with. But then Noel appears and it all starts to make sense. I mean, it can't be a coincidence that he shows up around the same time Emily makes contact with this unknown texter, right? Could he be the guy behind the burner phone? I think it's very possible.

The writers want us to connect the dots that Rollins' apparent real name, Archer Dunhill, stands for the A.D. we've come to know all season. But I just can't see the show giving something that big away so early on. Remember how long it took for us to finally find out who A was? So the way I see it is either Rollins and A.D. share the same initials or Rollins has been using A.D.'s name as some sort of decoy to throw the Liars off the real A.D.'s track. And who's to say that real A.D. isn't someone the girls have known for years... like Noel.

Not only does he have a longstanding history with the Liars and with keeping secrets in general (like when he helped Alison hide out), but he also shares close ties to Charlotte, considering she used to hang out with his brother Eric quite a bit back in high school. Maybe the two of them became closer than we ever realized, which would explain why this A.D. person (cough, Noel, cough) is so obsessed with finding her killer. Maybe he wants someone to pay for what they've done and since Rollins was unable to get to the bottom of it, he figures it's time for him to step in and do it himself.

More like this
Everything To Know About The 'Pretty Little Liars' Reboot On HBO Max
By Mary Kate McGrath and Jack Irvin
The ‘Love, Victor’ Showrunner Gave Fans Hope For A Possible Spinoff
By Brad Witter
Legacies Showrunner Said There Is Still Hope For More Vampire Diaries
By Gretchen Smail
'Succession' Season 4 Could Be The Show’s Last
By Kadin Burnett and Gabrielle Bondi
Get Even More From Bustle — Sign Up For The Newsletter