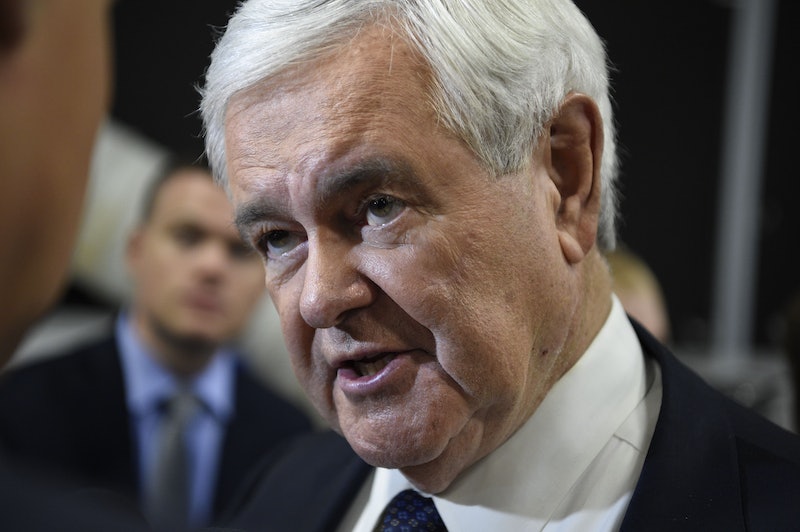 Not too long ago, former House Speaker Newt Gingrich was on the short list to be Donald Trump's running mate. Trump ultimately went with Indiana Gov. Mike Pence, but Gingrich still earned a speaking spot at this week's Republican National Convention (RNC). On Wednesday, Gingrich's RNC speech in Cleveland made a case for his political career to go on long after missing this year's GOP ticket.

Gingrich addressed the conservative convention crowd shortly before Pence on Wednesday night. Earlier in the day, he addressed the convention's Iowa delegation outside the walls of the Quicken Loans Arena. Standing aboard a boat in nearby Lake Erie, Gingrich reportedly spoke about the need for the U.S. to confront and destroy ISIS. He also hinted about where he could fit into a Trump administration besides in the vice president's office. "I've told Donald that I would like to be the chief planner," Gingrich said, according to The Washington Free Beacon.

If Trump finds a "chief planner" role for Gingrich remains to be seen, but the once-potential VP pick made his ideas for the country clear on Wednesday as he spoke on the RNC stage. The night's given theme was "Make America First Again." For Gingrich, that apparently meant making himself Trump's right-hand man and being first at staying on Trump's good side.

Wow. Thank you for that very generous welcome. And thank you, Callista. You know, she makes documentary films, writes best-selling children's series on American history, sings in the basilica choir, plays the French horn in the Fairfax Band. I am amazed at her achievements.

I'm also proud to be here as a Republican activist to the extra effort Donald Trump has invested in bringing the Republican Party together.

So to paraphrase Ted Cruz, if you want to protect the Constitution of United States, the only possible candidate this fall is the Trump-Pence Republican ticket.

That way we have a Republican ticket to implement Republican principles in Washington.

Now what I want to focus on is a subject that has dominated by thinking for decades, how do we keep America safe? Keeping America safe is the first responsibility of the American president. There have been many fascinating things to watch about the extraordinary historic rise of Donald Trump, but the most significant has been Donald Trump's courage to tell some important truths about our national security.

For example, we are at war. We are at war with radical Islamists. They are determined to kill us. They are stronger than we admit. And there is no substitute for victory.

In contrast to Donald Trump, our national security and foreign policy elites, led by Hillary Clinton, are incapable of speaking with such honesty while they lie about the threat. We need to tell the truth about the danger.

On Monday, an Afghan refugee in Germany used an ax and knives to slash and wound train passengers while shouting Allahu akbar. Last week, ISIS claimed responsibly after a Tunisian man drove a cargo truck into a crowd in Nice, France. He murdered 84 people including 10 children, three Americans, and injured over 300 others. Two weeks ago, almost 300 people were killed and more than 200 were wounded in bombing attacks in Baghdad.

Two days before that, radical Islamists in Bangladesh killed 20 hostages, including three American college students. A few days before that, at the Istanbul airport in Turkey, ISIS attackers armed with guns and bombs killed 44 people and injured hundreds more.

Last month, a radical Islamist in Paris stalked a French police officer to his home where he murdered the officer, tortured his wife to death in front of the 3-old-son, while streaming it all on social media. He was pondering out loud whether to kill the 3-year-old when he was killed by police.

Two days before that, an attacker pledging of allegiance to ISIS killed 49 people in an Orlando nightclub, and wounded dozens more.

All of this in just the past 37 days. We cannot let ourselves grow numb to these accumulating atrocities. One analysis estimated...

One analysis estimated that since January, 2015, some 30,000 people have been killed at the hands of terrorists. Let's be clear, Donald Trump is right. We are at war with radical Islamists. We are losing the war. And we must change course to win the war.

Let me be very clear, because I know the news media will do their best to distort this, we have nothing to fear from the vast majority of Muslims in the United States or around the world, the vast majority are peaceful. They are often the victims themselves. They are people we would be happy to have as our friends and neighbors.

The challenge, the challenge is when even a small percentage of a 1.6 billion people support violence against those who disagree with them, that is still a giant recruiting base. For example, Pew Research finds that only 9 percent of Muslims in Pakistan view ISIS favorably.

Unfortunately, 9 percent is 16 million people, and that is just one country. So the truth is although we are losing the war with radical Islamists, we have been very lucky.

The danger we face is much worse than the horrors that happened in Germany on New Year's Eve when 1,200 women were assaulted. It is worse than what is happening in France where there are stabbings of Jews in the streets and the nation's security chief warned recently that Europe is "on the brink of civil war."

It is worse than what is happening in Israel where average citizens fear for their lives whenever they leave their homes. The danger is even worse than September 11th when 19 hijackers murdered almost 3,000 Americans. The worst-case scenario is losing an American city to terrorists armed with weapons of mass destruction.

That is not just my view, back in January of 2001, the Hart-Rudman Commission warned the terrorists quote "will acquire weapons of mass destruction and some will use them. Americans will likely die on American soil, possibly in large numbers."

Fifteen years later, the dangers are even greater in a world where Pakistan has nuclear weapons, where North Korea has been weapons, and where Iran, the world's state sponsor of terrorism, is close to having nuclear weapons, this, a catastrophic attack on innocent Americans is a very real threat.

Which brings us to the heart of the matter, we are sleepwalking through history as though this is all about politics. It is not.

It is about our safety and our survival as a country. We cannot keep in place the people and the systems that have brought us to this point and then lie to us every single day about the threat. That is why every American should be terrified at the prospect of a Hillary Clinton presidency. Hillary Clinton has been right at the center of this dishonesty.

And yet, Hillary wants to increase the number by 500 percent. So when you hear about Hillary's dishonesty, of the emails, or taking millions from the Saudis or other Middle Eastern dictatorships, remember, this is not about politics. The cost of Hillary's dishonesty could be the loss of America as we know it.

The first step forward to safety is electing a leader who will be truthful with the American people about the realities we face. Only then will we understand, support, and demand the strategies require to confront this threat.

And because safety and security are the preconditions for our freedom and prosperity, it is also the first step towards rebuilding the America we love.

Donald Trump understands this. And that is why he will rebuild our military because he knows that a strong military is the best way to secure peace.

He will fire those responsible for the waiting lists and will give veterans more choices about their care. With Donald Trump's leadership, no bureaucrat will get between a veteran and their doctor.

Donald Trump will get America building again. He will blow apart the ridiculous regulations and requirements that drive up infrastructure cost and drag out the time-line to get anything built.

The Trump infrastructure program will make us once again the most competitive economy in the world. Donald Trump will rebuild our education system and give every parent of every income and every ethnic background a choice about where their children goes to school. Donald Trump will help us rebuild and strengthen our communities.

Here again, the first step is safety. The basis for strong families and good jobs and vibrant neighborhoods, that means restoring law and order. Donald Trump will show zero tolerance for people calling to the death of police officers.

Of course if individual officers are found to have violated someone's rights, they must be held accountable under the law. America is based on the rule of law. We are one nation under God, indivisible, with liberty and justice for all.

That it what has allowed us to absorb more people from more backgrounds than any nation in history. Nobody is above the law and nobody is too small to deserve its protection. Donald Trump won our party's nomination because he is willing to tell the truth about the things that matter.

He has a great running mate in Mike Pence. They will put our safety first and they will defend America first.

We can be proud to stand with them.

So tonight, the challenge for everyone in this hall and everyone Republican, Democrat, or independent who is watching at home, and knows we cannot continue on our current course, is to rise above our factions, and rise above the politics we have inherited, to ignore the lies of the news media and the old order, to reject the suicidal dishonesty of Hillary Clinton and her establishment allies, and to stand with Donald Trump and Mike Pence for what we know is true.