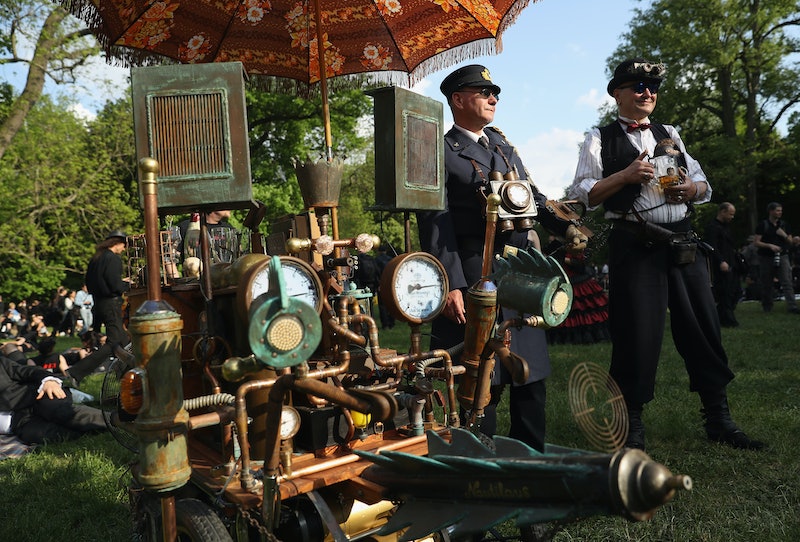 A few years ago, my friends and I were in a coffee shop in Portland, Oregon that had a distinctively steampunk aesthetic and vibe. Lots of antique-looking coffee makers, clocks with exposed gears, tons of metal and wood, the works. This lead to the discussion: is it still cool to like steampunk, or has the entire genre and aesthetic become passe? After thinking about it for a few minutes, we decided that haters be damned, steampunk would always be cool.For those of you who aren't familiar with the term, steampunk typically refers to a subgenre of science fiction or fantasy that takes place in a world powered by 19th century machinery. Typically these stories take place in a kind of alternate-historical environment (a lot of steampunk stories take place in an alternate Victorian England, though many are set elsewhere) that combines futuristic ideas with old-fashion technology. Think Disney's animated movie Atlantis or the novel Twenty Thousand Leagues Under the Sea. If you've ever seen someone rocking a Victorian-looking gown complete with futuristic-looking guns and goggles at a comic convention, you've got an idea of what a steampunk cosplay costume looks like.Steampunk might not be for everyone, but I personally have always loved the aesthetic and have sought out books and movies that incorporate steampunk elements. While there are a ton of great steampunk books out there (and you should absolutely check out the works of Jules Verne, who many credit as being an early influence on the much later steampunk movement), I've picked out eight of my favorite steampunk novels below.

1. The Golden Compass by Philip Pullman

Set in an alternate-universe Oxford run by the Magisterium, the story follows a little girl named Lyra who finds herself the only person able to read a mysterious compass-like instrument called an alethiometer. After she learns that her adopted guardian, Mrs. Coulter, has kidnapped her friend and a bunch of other children to perform experiments on them, she finds herself in the middle of a war between the church and those seeking to destroy God once and for all.

George has inherited his father's watch shop, but unfortunately knows nothing about fixing clocks. It turns out he also wasn't aware of what kind of shenanigans his father was getting into at the watch shop. Suddenly George finds himself helping customers like a man who seems to speak in 20th century American slang (the story takes place in Victorian England) and another who wants him to fix a strange device George's father apparently made. Oh, and George also finds a clockwork human that his father built that looks just like him, and ends up being accidentally kidnapped by someone trying to get their hands on the robot.

When I say that Alexia Tarabotti is soulless, I mean that literally. Her lack of soul gives her the ability to take away the powers of other supernatural creatures, including a vampire that tries to attack her. She accidentally kills it, and finds herself being investigated by Lord Maccon, a werewolf hired by Queen Victoria. There are a lot of supernatural creatures running around Victorian England, and Alexia wants to know what they're doing infiltrating London's high society.

A massive world war has destroyed much of the earth, and now London and a number of other cities survive by attaching themselves to wheels and engines and moving about the earth, looking for resources. Tom is a 15-year-old member of London's Guild of Historians, and spends his time looking for artifacts from the time before the war. When he's sent down to a bad area of the city for punishment, however, he uncovers that the leader of the Guild of Historians has a plan to obtain a massively powerful weapon. Too bad that wasn't exactly something he was supposed to know about, which maybe explains why everyone's out to kill him now.

Set in a steampunk-ified World War I-era Europe, the Archduke of Austria-Hungary has been killed and now his son, Alek, is running from his murderers. How exactly has Westerfeld made a steam punk WWI, you may ask? By making Germany and Austria-Hungary ("the Clankers") fight in giant walking tanks and zeppelins while England, France, and Russia ("the Darwinists") fight on giant airborne animals like whales and jellyfish. History class would have been a little more interesting if we talked about giant flying, fighting whales more often.

6. The Glass Books of the Dream Eaters by Gordon Dahlquist

Miss Temple's fiance had the nerve to end their engagement in a note, and now she's determined to find out why he's leaving her. After following him to a mansion in the country, she stumbles upon a group that's found a way to turn people's memories into glass, allowing them to share their past experiences with others. This may sound innocent, but a dastardly villain plans to use these memories to control the country's elite and, eventually, the world.

Jolly Fellows has been asked to investigate the disappearance of a robotic ballerina designed to dance a part in Swan Lake. Was she stolen, or does she have more of a mind of her own than she's given credited for? When Jolly gets framed for murder, however, he finds that he has more at stake in this case then just an automated dancer. If robot ballerinas aren't necessarily your thing, I should also note that the novel's villain is Charles Darwin.

8. The Invention of Hugo Cabret by Brian Selznick

Hugo lives in a Paris train station, fixing the clocks and doing his best to stay out of a Parisian orphanage. His father died in a fire and his uncle disappeared soon after, and now all that Hugo has left is an automaton that he and his father had started to repair before his death. Determined to fix the automaton, Hugo steals some tools from a neighboring toy maker, only to be caught. When the toy maker tries to prevent Hugo from finishing his project, Hugo has to look deeper at how the machine and the toy maker are connected.

More like this
This Episode 6 Moment Foreshadows Viserys' Fate On 'House Of The Dragon'
By Grace Wehniainen
Nicola Coughlan Shared A Lady Whistledown Excerpt From ‘Bridgerton’ Season 3
By Grace Wehniainen, Alyssa Lapid and Sam Ramsden
Alan Rickman's Diary Reveals Why He Considered Leaving 'Harry Potter'
By Darshita Goyal
The Most Anticipated Books Of October 2022
By K.W. Colyard
Get Even More From Bustle — Sign Up For The Newsletter