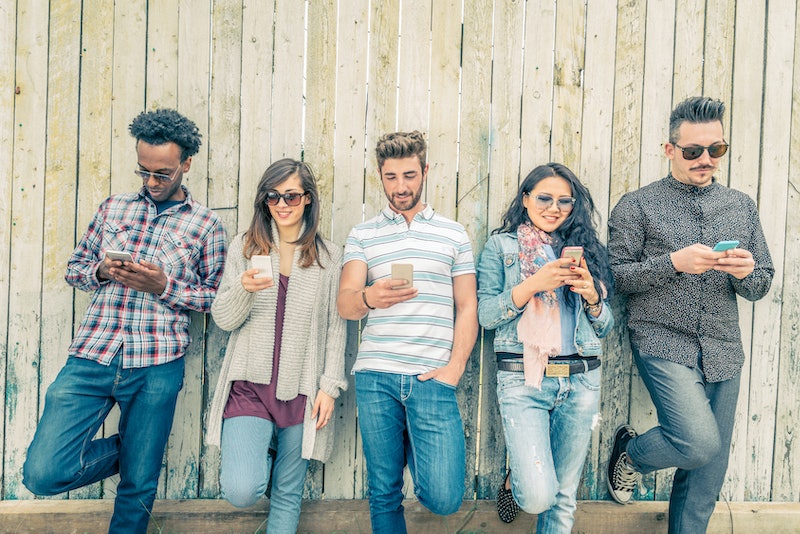 Always coming up with new ways for people to connect, Tinder just announced the Tinder Social launch, a feature that aims to bring people together and make dating a lot easier. If you've ever thought a first date would be so much better if you could bring friends along, Tinder Social allows you and your friends to basically organize a group date. Other dating apps have revolved around the idea of bringing friends — think Grouper or Squad — but this takes the dating app that everybody's already using for dates and allows you and your friends to use it together.

"We’ve always been about connecting people," a Tinder spokesperson tells Bustle. "Tinder Social is another great way to get out tonight and connect with other people going out— with the same network, the same power and the same scalability that Tinder brought to dating."

It's now available in the U.S. and the UK, as well as a few other markets. Apparently when it was launched in Australia in was used for things like pub crawls and concerts, according to a press release from Tinder. And I get the logic — so much of time groups go out together to a bar or an even with a vague intention of a romantic or sexual connection, but actually going to talk to other people outside your group seems really difficult or far-fetched once you're actually out. Having a link between your group and another group that facilitates conversation is a great social lubricant and takes the awkwardness out of approaching people you haven't met before.

So you have to start by unlocking the Tinder Social feature, which you can now do if you're in the US, the UK, or other markets where it's been launched. Then you get started by adding friends. The press release explains:

To get started, users can create a group by selecting 1-3 friends who have also chosen to opt-in. Once a group is formed, members can assign a status to their group, choosing from a variety of suggested activities like “Watch the game with us,” “Going to a concert tonight,” or “Happy Hour, anyone?” Tinder users can toggle Tinder Social ON and OFF by accessing their settings in-app at anytime.

If a group member of both groups swipes right, it’s a match -- the groups combine and members can chat with each other until the conversation thread expires at noon the following day ...

So, yeah it sounds kind of complicated. But like every technological update, I think it will be complicated for about two seconds of using it and then you'll have the hang of it and it will seem like second nature. Group swiping could become the new norm. And I think it has a lot of potential to do some good.

There have been a whole lot of dates where I wish I had a friend close by for some moral support. Or times where I've been out a festival and not had the confidence to go talk to other people. Partly because I inevitably seem to have ketchup in my hair, but partly because cold-approaching someone seems so intimidating. Tinder Social might just be your answer to both of these problems (OK, probably not the ketchup one). I think it's definitely worth checking out. and if there's no spark, your friends are right there. So go and swipe away.