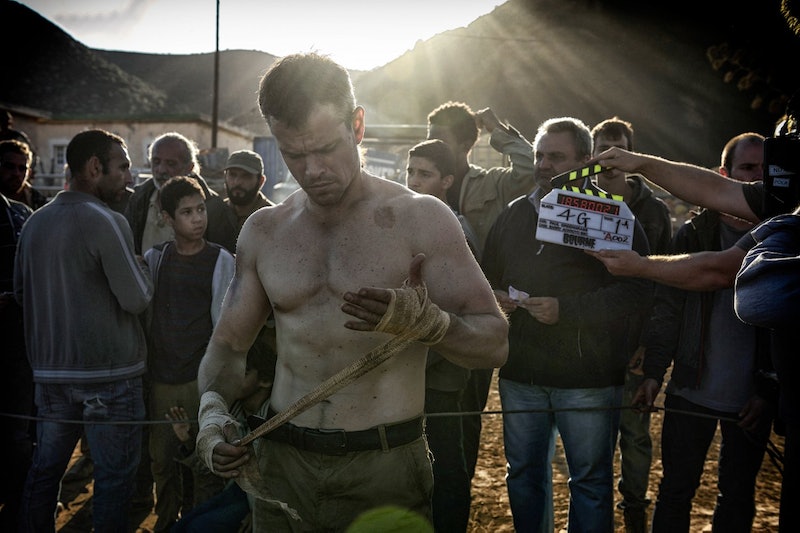 Matt Damon will be Bourne again on July 29, as the actor returns to his most action-packed role of Jason Bourne in... Jason Bourne. The film marks the fifth in the Bourne series, but only the fourth for Damon after he sat out 2012's The Bourne Legacy, which starred Jeremy Renner in the lead role of Aaron Cross. If this all sounds a little confusing to you and you feel like Jason Bourne trying to remember everything that's happened in this franchise, don't worry. I've put together a recap of what's happened in the Bourne movies so far.

The series dates back to 2002 with The Bourne Identity. This was the movie that introduced Jason Bourne (based on the character from the Bourne series of novels by Robert Ludlum), whom some critics would dub "Forgetful Bond." The film was a huge hit, and spawned a sequel two years later in The Bourne Supremacy. That movie did even better business, and Bourne came back three years later for The Bourne Ultimatum in 2007 — the franchise's most successful entry by far. After that, Damon took a break from the role, which is how The Bourne Legacy came about, but now he's back and all is right in the world. So that's the order, now here's what happened.

Jason Bourne is introduced on death's door, floating in the Mediterranean Sea with gunshot wounds. He has no memory of who he is, but he has exceptional skills as an assassin. He eventually learns that he was a member of a top-secret CIA program called Treadstone. He seeks out the creators of the program, who are trying to eliminate him, and convinces them to leave him alone. He also becomes romantically involved with a woman, Marie, and the two of them set off to disappear together.

Bourne is in hiding, enjoying his life with Marie. His happiness proves short-lived, however, as Marie is murdered during an attempt on Bourne's life by a Russian agent, who has also framed Bourne for crimes against the CIA. This sets the CIA after Bourne, who continues to recall events from his past as well as details about the Treadstone program, which has supposedly been shut down. Eventually, Bourne reveals to the CIA that he's been set up, and he kills the Russian agent who killed Marie, while also getting a confession out of the people who illegally ran Treadstone. At the end of the film, Bourne is given his true identity by Pamela Landy of the CIA, though he remains in hiding.

While still remembering more from his own past, Bourne investigates the illegal program that succeeded Treadstone: Blackbriar. He works in tandem with some trustworthy members of the CIA (Nicky Parsons and Landy) to uncover the truth about Blackbriar, eventually exposing it to the proper authorities. By the end of the film, Bourne is presumed dead, but of course simply faked his death to disappear once again.

Jason Bourne does not appear in this film, which instead focuses on Operation Outcome member Aaron Cross. Outcome members use pills that enhance their physical attributes, making them even more formidable than Treadstone or Blackbriar members. However, when Outcome is on the verge of being exposed like the other two programs, Cross becomes a target. He escapes and disappears, much like Bourne does in all of his films.

It's likely that the events of Legacy probably won't come into play much, if at all, in Jason Bourne. That movie was more of a spin-off than a sequel (some of it takes place concurrently with Ultimatum), while the new film returns the focus to the saga of Bourne himself. Taking place several years after he last disappeared in Ultimatum, Bourne resurfaces in the new film, still trying to unlock all of the secrets of his past. But at the same time, another secret government program has been set up to track him down and eliminate him. You'd think they would have learned their lesson by now.