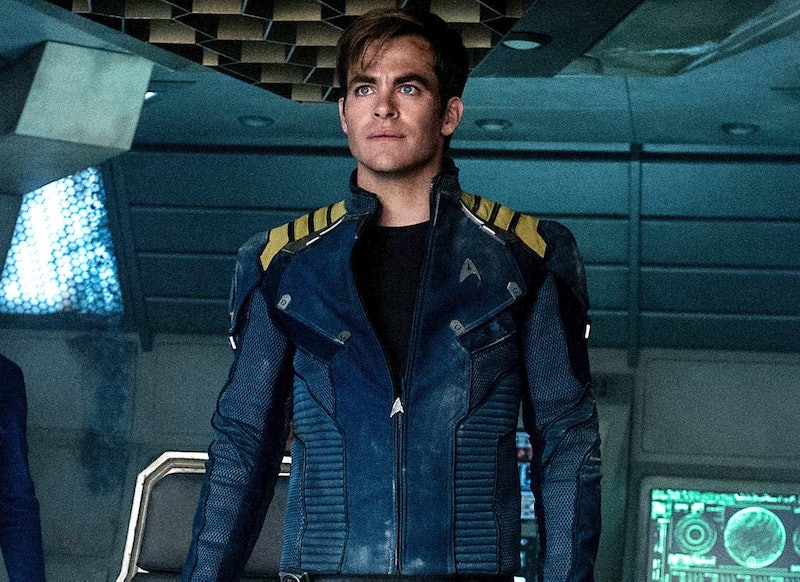 The day is finally here, Trekkies. Three years since the last movie in the franchise, Star Trek Into Darkness, hit theaters, the third installment of the series, Star Trek Beyond, has arrived — and with it, comes plenty of Star Trek Easter Eggs and references in Beyond, of course. Like most on-screen "universes," the Star Trek series includes plenty of call-outs to the many movies and TV shows it involves, some of which are more obvious than others. And while the Star Trek world may not be as Easter Egg-filled as, say, the Marvel or Pixar universes, it does contain a good amount of fun references to its previous iterations, as seen in Star Trek Beyond.

The latest movie in the series, out July 22, does not have an enormous amount of Easter Eggs and references, but it has enough that Trekkies will certainly be happy. And perhaps multiple viewings of the film will reveal more that were missed the first time around, so if you're hoping to catch them all, you better get to that theater ASAP so you can fit in another round. But for now, here are the biggest Easter Eggs and references to the Star Trek world seen in Star Trek Beyond. Spoilers ahead!

In one moving scene, Spock is shown going through the possessions of Spock Prime, who has died, and finding a photo of the original Star Trek series cast (Leonard Nimoy, William Shatner, and the rest are all there).

Early in the film, Kirk talks about how he's getting bored doing nothing in space, and how every day is starting to feel "episodic," a nod to the original Star Trek TV series.

Grunberg, best known for Lost, frequently appears in works by his friend J.J. Abrams, and has a quick cameo in Star Trek Beyond. He recently appeared as a pilot in Abrams' Star Wars: The Force Awakens, too.

The Beastie Boys' song "Sabotage" plays a big role in a pivotal scene, but it's not the first time the band has been involved in the franchise. In 2009's Star Trek, the same song appears in a scene with Kirk, and in 2012's Star Trek Into Darkness, the band's song "Body Movin' (Fat Boy Slim Remix) is heard in the background of a sequence. Clearly, the Beastie Boys are a big part of the Star Trek universe.

Radio Times pointed out that the joke in Star Trek Beyond about how music like The Beastie Boys' "Sabotage" is considered "classical" is actually a references to Futurama, as shown by the scene above. Pretty great.

CinemaBlend noted how, in celebration of the Star Trek franchise's 50th anniversary, Star Trek Beyond introduces 50 new species of alien into the movie. Special props if you can catch all of them.

CantonRep caught that Kirk acknowledging early on in the film that the mission was on day 966 is actually a nod to September 1966, the month and year the first episode of Star Trek debuted.

See if you can catch even more references when you see Star Trek Beyond.

More like this
The 'Hocus Pocus' Sequel Finally Has A Release Date & It Makes Total Sense
By Shannon Barbour and Radhika Menon
All The Sneaky Lindsay Lohan Movie Easter Eggs In Her New Ad, Explained
By Stephanie Topacio Long
S Club 7’s Jon Lee Continues To Reach For The Stars
By Rachel Mantock
“The Door Is Always Open” For Another 'Breaking Bad' Spin-Off, Says AMC Boss
By El Hunt
Get Even More From Bustle — Sign Up For The Newsletter