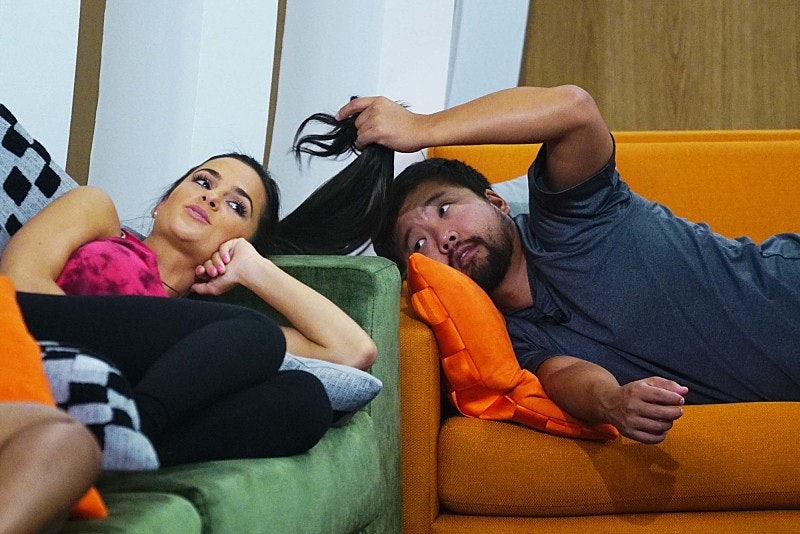 James and Natalie took their relationship to the next level on Big Brother. Despite being stuck on the block, Natalie found a silver lining in her brewing Big Brother 18 showmance with James. This is one showmance that has been teased for a few weeks, with Natalie even telling viewers that out of all the guys in the house, James is the only one she'd date out of the house. On Thursday night, Natalie and James finally admitted their feelings for one another, and even became "Big Brother official" (Natalie's words, not mine). So have James and Natalie had sex in the BB18 house? And, if not, will they?

Natalie broke down and told James she had a crush on him after he rudely rejected her offer to cook him some food, telling a houseguest to tell her that he was "a grown man" who could "cook [his] own food." Natalie's feelings were hurt, and later in the Have Nots room, she confronted him and let him know. If he was going to treat her that way, she said he could find someone else to cuddle in the house. James immediately apologized and confessed to Natalie that he liked her too, and the two ended up cuddling in one of the tiny bumper cars.

In her goodbye speech on the block, Natalie even singled out James, saying that he was her favorite person in the house. And, while their chemistry is evident to anybody watching, is it all just a showmance, or do James and Natalie actually have some physical sparks flying in the house? Well, it's complicated. Cameras in the house monitor the houseguests at all times, which means privacy is hard to come by. However, for audiences watching the live feeds, they've seen Natalie and James grow closer in a way that seems to eclipse gameplay. According to Big Brother Network, Natalie has been vocal about her affections for James to other houseguests, as has James. In fact, their relationship was so strong, Paul and Paulie worry that it might threaten their game.

Natalie and James might have publicly labeled their relationship a showmance, but something tells me this relationship is the real deal. Here's hoping if they do hook up in the BB house, they manage to keep it under wraps and away from the cameras.

More like this
The 'Big Brother 24' Racism & Bullying Controversy, Explained
By Jake Viswanath
Twitter Is In Meltdown Over The Confirmed Return Of 'Big Brother'
By Sophie McEvoy
'Indian Matchmaking's Pradhyuman & Ashima Have Made No Secret Of Their Marital Status
By Brad Witter
Fans Are Convinced That 'Love Island's Gemma & Luca Have Secretly Split
By Frances Stewart
Get Even More From Bustle — Sign Up For The Newsletter