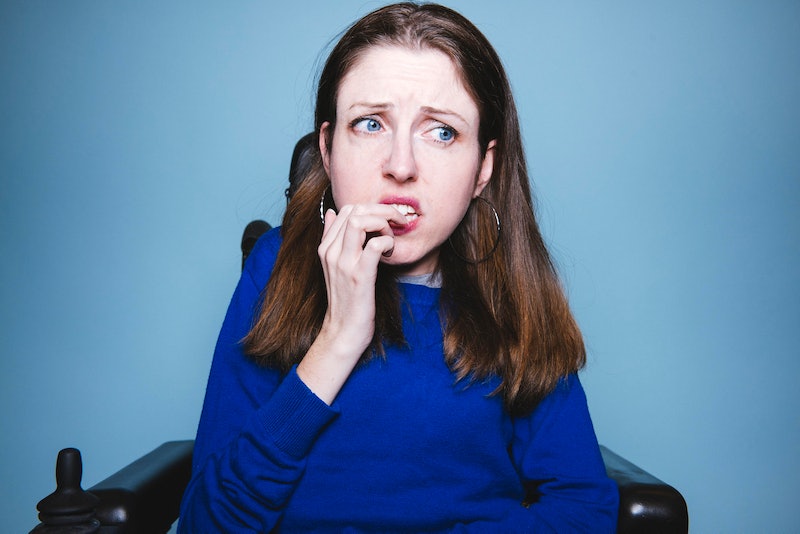 We all react to stress in different ways, but no matter who you are, it can be really important to have a few coping skills up your sleeve. And if you've been looking for some strategies to add to your toolbox for when life gets hard and everything feels overwhelming, I've got a simple stress management trick for you that might work wonders. It's called "cognitive defusion," and it asks you to sing your worries — literally. I know it sounds weird, but researchers have found compelling evidence that singing your anxieties can actually help lower them and make you feel more in control. Awesome, right?

The concept isn't new, but it's one that's worth revisiting from time to time. As Olga Khazan explains over at The Atlantic, the logic behind cognitive defusion is that singing your fears can help you separate them from their meaning. This means that even though you are vocalizing them, thereby taking them outside of your head and into the world around you, you're doing so in a way that can help your mind understand them differently. As Khazan says, "It’s better to treat [your stresses] just like you would a silly, meaningless song. They exist, but they have little bearing on your life."

And the evidence supporting the idea of singing your worries isn't just anecdotal, either; scientific research is also busy exploring cognitive defusion. For example, a study published in May 2016, "Using Brief Cognitive Restructuring and Cognitive Defusion Techniques to Cope With Negative Thoughts," found that when subjects used various diffusion techniques, including singing an unwanted thought, it reduced the frequency of the thought while also making it less believable.

The researchers found a similar result when subjects said their fears in a silly, cartoon-like voice. These results were in contrast to a different technique often used to ease stress and anxiety, which encourages people to think of alternative possibilities or different thoughts — that is, instead of changing the subject for yourself entirely, you re-frame how you think about it. And apparently, re-framing it in an amusing way, like singing or talking in a funny voice, can make a big difference.

Of course, one trick isn't likely to work for every single person, especially if you have chronic stress or mental health issues, like anxiety or depression; as such, cognitive defusion is a trick that might be best used on a case by case basis. This technique might be worth trying out to see if it fits with your personal needs, but if it doesn't work for you, that's OK, too. There's no harm in continue to test new techniques out until you find the right methods for you when it comes to easing your stress.

And if you feel like simple tricks or coping skills aren't helping you enough, that's totally OK, too. It might be a sign that it it's time to talk to a mental health professional about what's going on; they'll help you develop some coping mechanisms that work for your specific needs. Stress sucks, but dealing with it doesn't have to; you just need the right tools to do it.