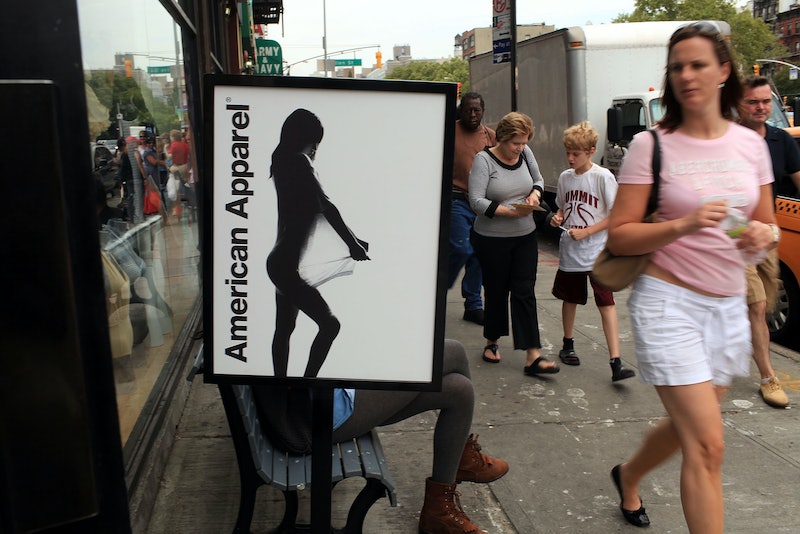 American Apparel is no stranger to things that make us go hmmm. In the past few months alone they've delivered a 62-year-old model in lingerie and mannequins with full-on pubic hair, but the brand has long come under fire for their racy, hyper-sexual advertisements. Their latest campaign is no exception.

The NSFW ad features a bare-chested model with the words "Made in Bangladesh" printed across her breasts. The image is undoubtedly intense, and at first glance may seem unnecessary. After all, aren't women sexualized in media enough? But the meaning behind the shoot may change your mind.

According to the official statement released with the image and reproduced at ELLE, the model's name is Maks, a Bangladesh-born merchandiser who has worked with the company since 2010. The lengthy statement goes on to explain the message intended by the advertisement:

Born in Dhaka, the capitol of Bangladesh, Maks vividly remembers attending mosque as a child alongside her conservative Muslim parents. At age four, her family made a life changing move to Marina Del Rey, California. Although she suddenly found herself a world away from Dhaka, she continued following her parent's religious traditions and sustained her Islamic faith throughout her childhood. Upon entering high school, Maks began to feel the need to forge her own identity and ultimately distanced herself from Islamic traditions. A woman continuously in search of new creative outlets, Maks unreservedly embraced this photo shoot.

She has found some elements of Southern California culture to be immediately appealing, but is striving to explore what lies beyond the city's superficial pleasures. She doesn't feel the need to identify herself as an American or a Bengali and is not content to fit her life into anyone else's conventional narrative. That's what makes her essential to the mosaic that is Los Angeles, and unequivocally, a distinct figure in the ever expanding American Apparel family.

We have to admit, that seems pretty cool. After all, Maks is owning her body in this image. She stares straight out at the camera, and not seductively. This is an "I dare you to criticize me" stare. Maks is topless for herself, not for you.

Besides, embracing an ad featuring a semi-nude Muslim woman who is consenting to her nudity seems kind of... feminist. Touché, American Apparel.

More like this
Introducing Beauty Beat, The UK’s First Luxury Beauty Event For Women Of Colour
By Justine Knight
Here Are All 703 Outfits Rachel Wore On Friends
By Kat George
The Best Heels For Bunions, According To A Podiatrist
By Margeaux Baulch Klein and Maria Cassano
Amanda Gorman Shared A Powerful Message On Meghan Markle’s Penultimate Podcast
By Darshita Goyal
Get Even More From Bustle — Sign Up For The Newsletter