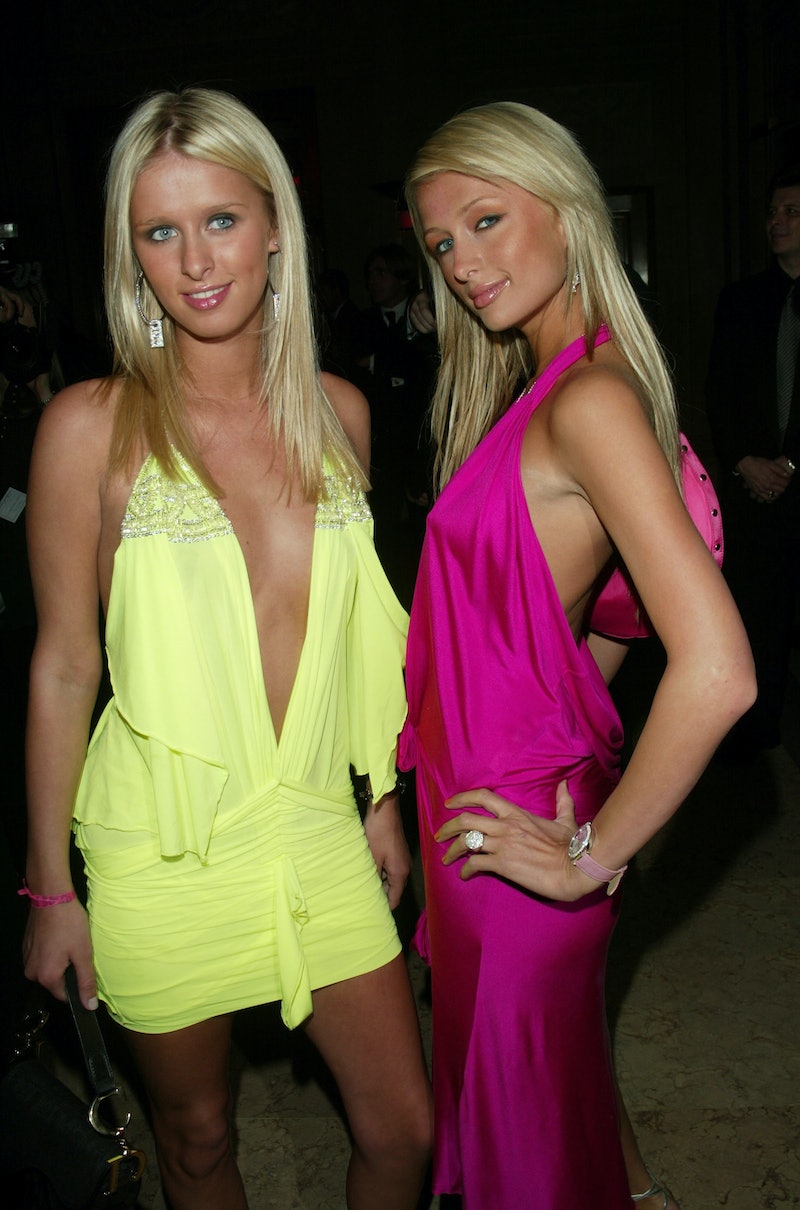 Ah, the early 2000s, I remember them well. They were years full of under-21 clubs, baguette initial bags, velour tracksuits, and visible thongs. With these questionable sartorial choices also came a list of early 2000s clothes we used to hide from our parents. You know, for the safety of their blood pressure and for the sake of our butts.

While asymmetrical skirts and shrunken bolero jackets were A-OK in mom's book, corset "tops" and butt-skimming weekend dresses were not. But the issue with that was simply that when it came to the parentals hating a certain look, it only became all the more alluring.

And so, clever shenanigans were plotted out in order to sneak the contraband items past their noses: Bandage dresses were stuffed into the bottoms of backpacks, pointy-heeled boots were tossed out of windows and into the bushes, lingerie camis were sneakily concealed underneath lumpy sweatshirts, and promises of being home by midnight were shouted out as we flew out of the house.

Where mom saw us leaving in a prairie skirt and turtleneck, a mini skirt the size of a wide belt was just waiting to be busted out in the safety of a friend's car. Below are 11 early 2000s items we used to hide from our parents — relive the fun and the rebellion.

Every teenage girl experimenting with her newfound cleavage likely knew the reverted keyhole halter well, amiright? Rather than having the little flash of skin tantalize at the top of the neckline like a normal keyhole blouse, the detail plummeted way past your cleavage and peeked out an inch or so above your bellybutton.

The end result was a whole lot of boobage, which was just what you wanted. And rightfully so — if you got 'em, flaunt 'em. But I think it was safe to assume mama wouldn't usually chant to that same mantra.

Renaissance-fair-like details were über popular in the beginning of the naughties, criss-crossing their way down pant legs and blouse sleeves. But one thing parents couldn't quite wrap their minds around was letting their teenage daughters leave the house with — for lack of a better word — highlighted crotches. I'm all for sex positivity, but I'm guessing mom wasn't. For shame.

3. Thongs Outside Your Jeans

The dawn of the tracksuit brought on an obsession with thongs, and with it grew a trend that was all about showing off those strings. Bikini strings peeked out from the waists of mini skirts, backs of thongs winked out from behind pocket-less jeans, and tantalizing (often hardware-carrying) thongs were snapped to ride just below the hip bones.

The end result was a sexy, forward style, but one that had to be flaunted at least 10 miles away from a parent's watchful eye.

This jean trend was meant to make us look like we had ripped off the waist of our jeans in a lustful rage, with the top frayed and hitting just (barely) above our pubic bones. It was impossible to sit without mooning the people behind us, but that only provided us with the bonus of upping our thong game.

For you, it was probably sartorial heaven. For your mom, things things were on her assassination list. These bad boys had to be hidden in the back of your closet, behind your Encyclopædia Britannica's.

Off-the-shoulder, keyhole-toting, scantily-crocheted, and tantalizingly sheer boho shirts were almost on every parent's shit list. It seemed that "boho chic" in the early 2000s was all about flaunting that sex appeal. And while you probably thought you were just tapping into your hippie side, all your dad could think about was how he could clearly see your bra at the breakfast table.

I was guilty of this one: The second I turned 18, I marched my way down to Jade Dragon Tattoos next to my mom's favorite Polish deli, slapped a 20 on the counter, and got a disco ball pierced through my bellybutton. I thought I could keep it from my mom until I hit middle age, but she found out about three days later when I was lying like a sloth on the couch with my shirt riding up. Sigh. Tell me you did better.

Flirty, girly, and full of sass, denim minis were as much a staple for teenage girls as layer-able tank tops or foam flip flops. Bonus points if you invested in a "belt skirt," which really was just a modern day loin cloth. The good news was that if your mom found it in your room, she'd just assume it was a napkin and move on.

Was this the last of the '90s grunge phase, trickling itself out in the years right after Y2K? After all, there was nothing more rock than showing up in a piece of lingerie with a leather jacket. Courtney Love looked cool in slip dresses, and we thought we were pulling off nightie tanks like they were NBD.

These guys. These were the dresses worn while waiting in line to enter the under-21 foam party at the underage nightclub, or bought with the secret hopes of getting to wow your school crush at a kegger. Even though you knew full well that your high school parties revolved around capri jeans and having Prisoner Of Azkaban playing in the background.

Either way, chances are you owned one of these stretchy-band, tauntingly loose halter dresses at one point in your life. And the best way to sneak out with it was just to toss it into your baguette-shaped bag... because you knew this baby took up as much room as a box of mints.

Your mom thought sweatpants were all about lounging around eating convenience store cookies and frozen pizzas in comfortable bliss. But what she forgot was that if you bought a pair that rode just below your hip bones, you instantly turned into a Hilton sister and oozed sex appeal.

So much boobage, so little time. This was easily sneaked out of the house by throwing a zip-up hoodie on top, accompanied with mumbled plans about going to catch a movie and a meal at the mall. But really, you were going to a party and you were going to do ~experimental~ things.

Part of growing up was about rebelling and pushing the envelope when it came to the parentals. But in the end, all of the sneaking around and quick wardrobe changes in the car were for them. We wanted to avoid throwing them into premature heart attacks. You're welcome, guys. Love you.

More like this
‘90s Streetwear Brands That Are Making A Major Comeback
By Dominique Norman
11 Trends From The ‘90s That Made You Feel So Cool
By Julie Sprankles
5 Mini Skirt Outfits To Wear, Inspired By These Brave Souls
By Avery Matera
10 Nail Trends That Perfectly Capture The Early 2000s
By Paris Giles
Get Even More From Bustle — Sign Up For The Newsletter