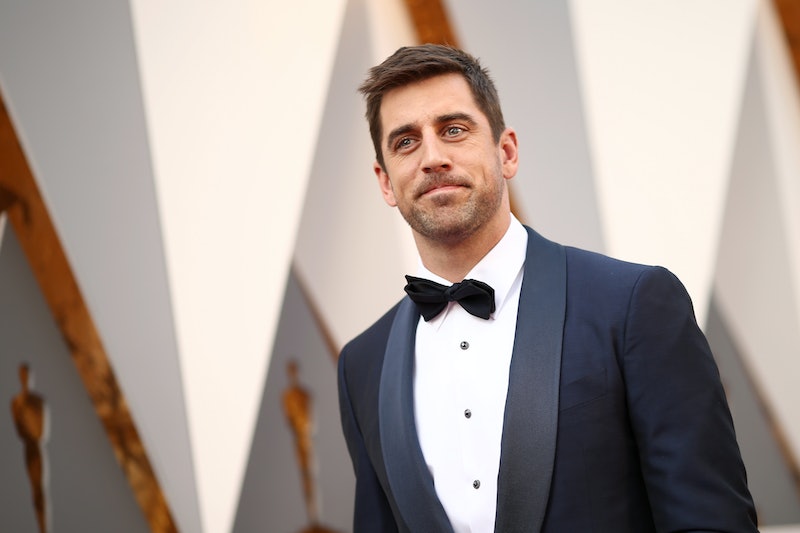 Ever since the rumors began to spread that Jordan Rodgers — younger brother to NFL quarterback Aaron Rodgers — was going to appear on Season 12 of The Bachelorette, fans have wondered about the relationship between the two football-loving brothers. Many thought Jordan's recent hometown date on The Bachelorette would shed some light on the distance between him and his famous brother, but not too many details were given. So, we'll probably never know what happened between Jordan and Aaron Rodgers but it's really none of our business.

To recap what we do know about the rift between the Rodgers' brothers: Jordan didn't talk much about his famous brother throughout the season — every time Aaron came up earlier in the season, it was because one of the other contestants mentioned the relationship (sometimes implying Jordan was on the show for the wrong reasons). So, the first instance of Jordan actually addressing the topic of his brother came during his one-on-one date with JoJo the week before hometowns. In an effort to warn her that Aaron wouldn't be there during hometowns, Jordan explained that he has a complicated relationship with his brother, and insinuated that a rift exists between Aaron and the rest of the Rodgers clan as well.

Then, during the actual hometown date, JoJo attempted to talk with Jordan about Aaron again while they were visiting the contestant's old high school. But, Jordan didn't go into it, and said Aaron "doesn't need to be a topic." However, JoJo asks both Jordan's father and other brother, Luke, about the complicated relationship during the date, though neither give any details and largely reiterate that it's a sore subject for the entire family.

Even since The Bachelorette has wrapped filming and more people know there's something going on in the Rodgers family, neither Jordan nor Aaron have shared much in interviews. Jordan remained vague on the topic in a recent interview with Katie Nolan on her Garbage Time podcast, and Aaron has avoided the subject in the press. It's clear that neither brother in the public eye wants to talk about their relationship, otherwise they would be more forthcoming with details.

So, considering it seems the Rodgers' want to keep their private lives private (as indicated by their lack of details in any public forum whether it's The Bachelorette, social media, or the press), it's likely we won't ever know what happened between Aaron and the others. But, that's totally fine because it's none of our business anyway. If Jordan or Aaron felt like revealing details to the world about their relationship, they would have, and we should respect their desire to keep whatever happened between them private, unless they choose to come forward with the information themselves. However, that’s a decision no one but the Rodgers can make, so we should stop pressuring them to talk about something that is clearly personal.